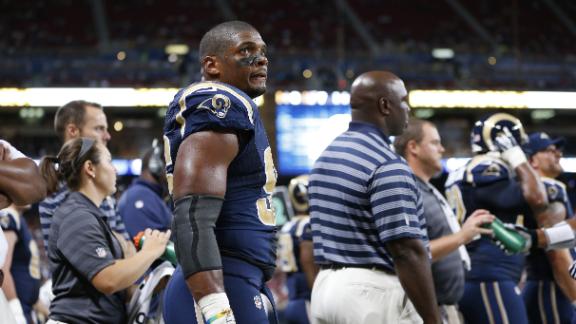 Sam, a seventh-round draft choice, had been battling undrafted rookie Ethan Westbrooks for a final roster spot. Westbrooks was one of nine defensive linemen to make the team.

Sam thanked the Rams for the opportunity in a series of tweets after the team made the announcement.

I want to thank the entire Rams organization and the city of St. Louis for giving me this tremendous opportunity and allowing me to (1/2)

- Michael Sam (@MichaelSamNFL) August 30, 2014show I can play at this level. I look forward to continuing to build on the progress I made here toward a long and successful career (2/2)

- Michael Sam (@MichaelSamNFL) August 30, 2014The most worthwhile things in life rarely come easy, this is a lesson I've always known. The journey continues.

- Michael Sam (@MichaelSamNFL) August 30, 2014Sam officially hit waivers Saturday at 4 p.m. ET when all NFL teams had to trim their rosters to the league-mandated 53 players. From there, the other 31 teams will have until noon ET on Sunday to put in a claim for Sam. If he goes unclaimed, he will be free to sign with a practice squad.

A league source said earlier this week that the Rams would like to bring Sam back to their 10-man practice squad, but Fisher fended off questions about any potential moves Saturday, saying the practice squad will be affected by the team's needs at other positions.

"There will be no challenge, no challenges whatsoever," for whatever team picks up Sam, Rams coach Jeff Fisher said at a news conference Saturday.

"There's no challenge with respect to Mike Sam. He's not about drawing attention to himself. He kept his head down and worked and you can't ask anything more out of any player for that matter."

Fisher repeated over and over that it was purely a football decision.

"I will tell you this: I was pulling for Mike," he said. "I really was, and I don't say that very often. Mike came in here and did everything we asked him to do."

The coach personally delivered the news to all of the cuts, except for Sam, who attended Missouri's opener in Columbia, a 1½-hour drive west on I-70 from Rams Park, and learned via cell phone. He was introduced to the crowd in the end zone alongside cornerback E.J. Gaines, a sixth-round pick who made the team.

Sam blew a kiss and waved to the crowd, then walked back to the sideline. He posed for a few pictures then started looking at his phone and headed for the locker room.

Fisher plans to meet with Sam on Sunday.

"He said 'Yes sir,' and he said, 'I understand.' He said, 'Thanks for the opportunity,' and I said, 'Mike, I'm looking forward to visiting with you tomorrow,' and he goes, 'I am, too,' " Fisher said of their phone conversation.

Jason Collins, who became the first openly gay athlete in North America's four major professional sports when he signed with the NBA's Brooklyn Nets in late February, tweeted out his support for Sam.

Sometimes in life you have to take the long road to get to your destination. @MichaelSamNFL can & will help a @nfl team win games. #workhard

"Michael Sam's quest to play in the NFL may have hit a roadblock today, but he may not be out of the game," she told ESPN's LZ Granderson. "This is a football issue and not about his sexual orientation. Some have said he can play in the NFL and hopefully another team will pick him up. What he has already done for the LGBT community is remarkable and I don't think we have seen the last of Michael Sam."

The Rams spent a seventh-round draft pick, No. 249 overall, on Sam in May's draft. He put together a solid preseason performance, coming up with 11 tackles and three sacks. In Thursday night's preseason finale against Miami, Sam finished his preseason work with a team-high six tackles.

After the game, Fisher offered an endorsement of Sam's ability.

"I believe he can play in this league," Fisher said.

Fans sure believed so: Sam had the seventh-best selling jersey on NFLShop.com, the league's official store, from April 1 through July 31.

Sam came out following his final season at Missouri, though he had told his teammates before it began. The Tigers went on to tie a school record with 12 wins. Sam had 11½ sacks and the lightly-regarded Tigers won the SEC Eastern Division, a huge step forward after going 5-7 during the first season in their new conference.

"If you look at our season, it didn't hurt us at all," Gaines recalled.

Information from ESPN.com's Darren Rovell and The Associated Press was used in this report.

Will Sam Make It In The NFL?
ESPN writer LZ Granderson discusses how defensive end Michael Sam will look to bounce back after being released by the St. Louis Rams.

Michael Sam To Rams Practice Squad?
Herm Edwards shares his advice for Michael Sam, who was cut by the Rams on Saturday.

Why The Rams Cut Sam
Mark Schwarz and Nick Wagoner discuss the Rams' decision to cut defensive end Michael Sam and what could be next for Sam.