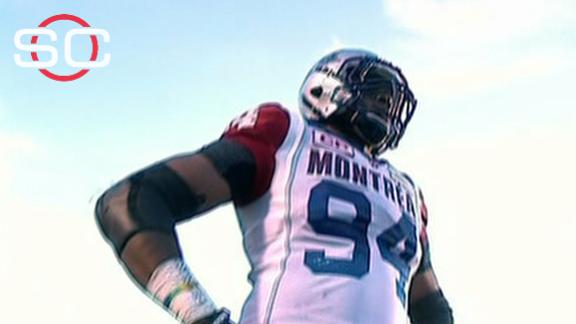 OTTAWA, Ontario -- Michael Sam became the first openly gay player to appear in a Canadian Football League game Friday night, playing sparingly for the Montreal Alouettes in a 26-23 loss to the Ottawa Redblacks.

"I was focusing on my assignments, actually," Sam said when asked whether he was thinking about the significance of the moment before kickoff. "I'm not going to lie, there were some big jitters out there, and I was nervous when I first got on the field. I didn't get any opportunities to make many plays. I had some good pass rushes, I thought, but close enough is not a sack."

The 2013 Southeastern Conference defensive player of the year atMissouri, Sam was selected by the St. Louis Rams in the seventh and final round of the 2014 NFL draft. He was cut by St. Louis and signed by Dallas to the practice squad but didn't make theCowboys' roster.

Sam, 25, agreed to a two-year deal with the Alouettes this summer. He left training camp June 12, citing personal reasons, and sat out the team's first five games.