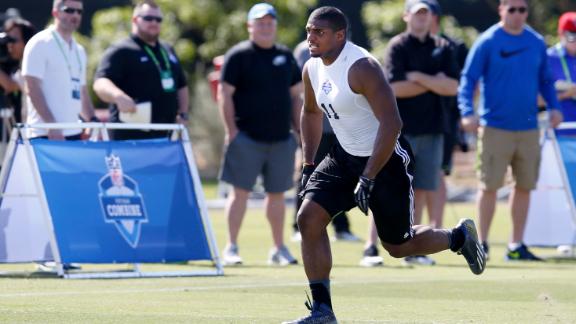 TEMPE, Ariz. -- The official results are in, and Michael Sam broke the 5-second mark in the 40-yard dash at the NFL veterans combine Sunday.

Sam's official 40 time was 4.99 seconds, ran on his second attempt. His first try was clocked at 5 seconds flat.

His fastest unofficial time from Sunday's combine, held at the Arizona Cardinals' practice facility, was 5.07 seconds. At the NFL scouting combine in 2014, he ran the 40 in 4.91 seconds.

Sam has been a free agent since the Dallas Cowboys released him from their practice squad Oct. 21. He was one of 105 participants in the league's first veterans combine, which has seen three players signed since Monday.

Wide receiver Nathan Slaughter had the fastest 40 time at the veterans combine, clocking in at 4.44 seconds. He signed a two-year deal with the Cardinals.