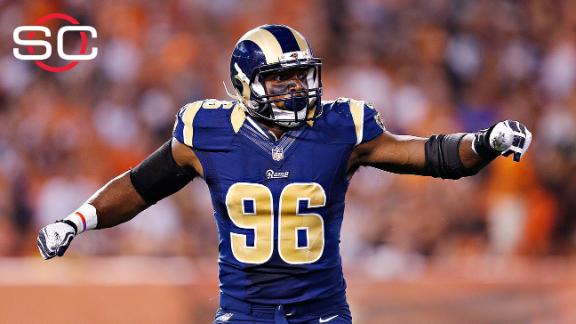 Michael Sam, the first openly gay player drafted by an NFL team, signed a two-year contract Friday with the Montreal Alouettes of the Canadian Football League.

"With the signing of Michael Sam, we have become a better organization today," Alouettes general manager Jim Popp said in a release. "Not only have we added an outstanding football player, we have added even a better person that brings dignity, character, and heart to our team."

The Alouettes have held the exclusive CFL rights to Sam since his senior year at Missouri, when he was the SEC Co-Defensive Player of the Year.

"I am very excited and proud to join the Montreal Alouettes," Sam said in a statement. "... I cannot wait to put on the pads, get back on the field and work hard each and every day with my teammates to bring a Grey Cup to the great fans here in Montreal."

Popp never considered Sam's sexuality to be an issue.

"Michael Sam is a very good football player, and that's the reason we signed him," Popp said. "He's an outstanding pass-rusher."

Sam was taken by the St. Louis Rams in the seventh round of the 2014 draft but didn't make the team. He has been a free agent since the Dallas Cowboys released him from their practice squad on Oct. 21.

Sam had said during the NFL veterans combine on March 22 -- where he clocked 4.99 seconds in the 40-yard dash -- that Montreal was still an option.

Sam will be introduced by the Alouettes at a news conference on Tuesday.

After he came out, Sam's NFL jersey was an instant best-seller and President Barack Obama publicly congratulated Sam and the Rams.

"Congratulations to the Montreal Alouettes on the signing of Michael Sam," Orridge said in a statement. "Our players come to us from different places, different walks of life and ultimately they take different paths to get to our fields.

"Today is another indication of how open and progressive the CFL is -- consistent with our rich and storied history of great football tradition."

Aware of Sam's celebrity, the team immediately put his No. 94 Alouettes jersey on sale on its website for $139.95.

The Alouettes had Sam on their negotiation list, and Popp said he was in contact with Sam all along. The 6-foot-2, 260-pound player finally accepted a contract after completing his commitment to "Dancing With The Stars."

"Each time he was let go, there were discussions," Popp said. "He wanted to give it one last shot at the combine."

Popp said Sam was considered a tweener by NFL clubs; he didn't have quite the right body type to be a defensive end or an outside linebacker in the league.

But Sam may fit perfectly in the CFL. Popp believes Sam can follow a path similar to that of Cameron Wake, who was converted from linebacker to end when he joined the BC Lions in 2007. Wake was the Defensive Player of the Year in his two CFL seasons before signing with the Miami Dolphins, with whom he has had a successful NFL career.

"If he proves (NFL) people wrong, it would be great for us, and I think he can do it," Popp said.