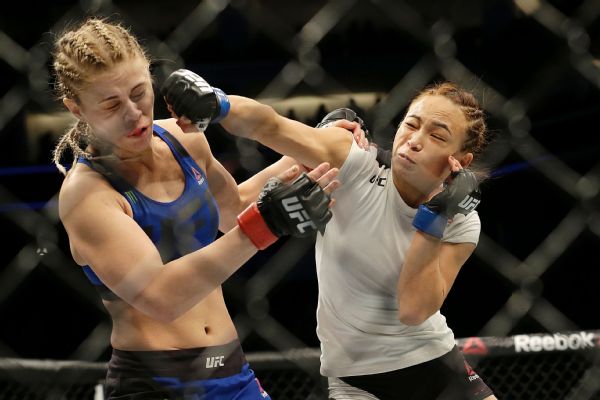 SACRAMENTO -- Saturday's UFC Fight Night had all the makings of a big night for hometown prospect Paige VanZant.

It turned into Michelle Waterson's coming-out party instead.

Coming off a 17-month layoff, Waterson (14-4) looked incredible in a submission victory over VanZant inside Golden 1 Center. Waterson took VanZant's back after throwing her to the floor and quickly sank in the rear-naked choke.

Waterson has held a major title before, the 105-pound Invicta FC title, but this was arguably the biggest win of her career, and on the grandest stage.

"I want to thank [VanZant] for giving me this opportunity to come here and headline this event," Waterson said. "My daughter told me I would be her favorite fighter if I won tonight, so I had to make it happen.

"I've been in the gym every day, injured or not, waking up before I had to take my daughter to school so I could get the workouts in that I needed to show the world what I can do in the UFC."

A karate black belt, Waterson landed a few kicks from the outside and caught VanZant with right hands as she tried to press into the clinch. Waterson truly seized control after the takedown, which came in the form of a strong judo throw.

VanZant, who trains out of Sacramento's Team Alpha Male, had no answer for Waterson's slick ground game. It is the ninth submission win of Waterson's career.

After making her UFC debut in July 2015, Waterson was forced to pull out of multiple fights in the past year because of knee and hand injuries.

VanZant also missed time in 2016 because of an appearance on ABC's "Dancing With the Stars." She scored a highlight-reel knockout over Bec Rawlings in August, which was her only other performance this year.