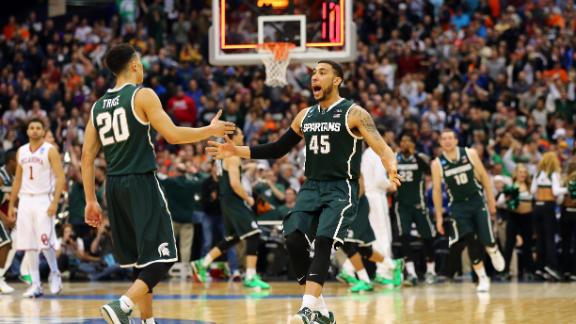 
Either the Louisville Cardinals or the Michigan State Spartans will go to the Final Four.


Either the Louisville Cardinals or the Michigan State Spartans will go to the Final Four.


That's Louisville, a team whose own players admit as recently as two weeks ago it lacked leadership and cohesion, and Michigan State, a team that just last month lost to Illinois at home.


The madness of March comes from the unexpected, so, in theory, this ought to be filed under March magic. But anyone who thinks the unexpected is anything but expected with these two teams hasn't been paying attention.


Denzel Valentine, who had just five points in the first half but finished with 18 in the Spartans' 62-58 win againstOklahomain the East Regional semifinal of the NCAA tournament,was asked what changed for him.


"The first half, it felt like it was my first time playing basketball,'' he said. "I just snapped out of it. I was like, 'I'm in the Sweet 16, with a chance to go to the Final Four. I'm a junior. What the heck?' I smacked the ground and woke up, I guess.''


There has been a lot of earth slapped for these two programs: a come-to-Pitino moment in Louisville, Kentucky; a come-to-Izzo moment in East Lansing, Michigan.

Rick Pitino and Tom Izzo have made a career squeezing the last bit of sweat out of their rosters, often flailing through the early parts of the regular season only to work some mastery when it matters.


And so this is what they do, and this, by extension, is what these teams do.


Still, this stretches the unfathomable to new levels.


On March 12, Louisville lost by 10 to the North Carolina Tar Heels in the ACC tournament, a quick exit from the conference tourney in Greensboro, North Carolina. By then, the Cardinals had been without Chris Jones for three weeks, so that wasn't the problem.


"We had no leaders on this team, including myself,'' guard Terry Rozier said after the Cardinals' 75-65 win over NC State. "Nobody would step up. Nobody would go help a guy up if he hit the deck.''


So then what? What happened? Part of the credit goes to Pitino. In the past 20 years as a head coach, he's been to the Elite Eight 11 times. That's a staggering statistic of success.


There is nothing the man hasn't seen -- both on the court and off -- so if anyone can pull an Elite Eight team out of a bunch that can't shoot, couldn't score and waffled in dysfunction, it is Pitino.


"Nothing he does surprises me anymore,'' assistant coach Wyking Jones said. "Nothing.''


But while coaches work magic, they are not actual magicians. They can't actually score from their seats on the bench, nor can they defend, nor can they force teammates to like each other.


The Cardinals did that on their own. There were team meetings, but more than that, it was a realization; the recognition that if they continued on the path they were traveling, the season was going to end, and end quickly.


"At the beginning of the season, there was too much one-on-one,'' guard Quentin Snider said. "Too many guys worried about themselves. Now, we're playing as a team.''


Michigan State always played as a team. That wasn't the problem.


The team frankly wasn't very good. Izzo will openly admit that this is not a traditionally talented team, that it won more on grit than ability, with a minimal margin for error.

"We're kind of a bag of nuts,'' he said lovingly of these Spartans.


The grab bag was a woeful 15-8 after that Illini loss. Though maybe it wasn't fair to expect more, Michigan State is spoiled by success, so expecting more is now what the Spartans do.


The funny thing is, it wasn't the lack of talent that was doing Michigan State in so much as it was a lack of toughness. The last time anyone said that about an Izzo-coached team was ... never.


As is so often the case, the crash and burn caused the turnaround. Izzo said he believes he started seeing a change about 14 games ago, which would be when the Spartans playedNorthwestern-- one game after that Illini loss. They've lost just three times since then, one an epic Big Ten tournament title game battle of the ages toWisconsin.


That near-miss jump-started this two-weekend march through the tournament, and has left Izzo -- always a bit of a softie for his team -- giddy with excitement, not just about what lies ahead but about what's already been accomplished.


"One more victory would be one of the sweeter moments of my career,'' he said. "If this team wins another game, it might be one of my favorite banners hanging from the rafters because of what this team went through.''


One more victory for either team, really, would be rather sweet.


Unbelievably so, yet predictably so, too. 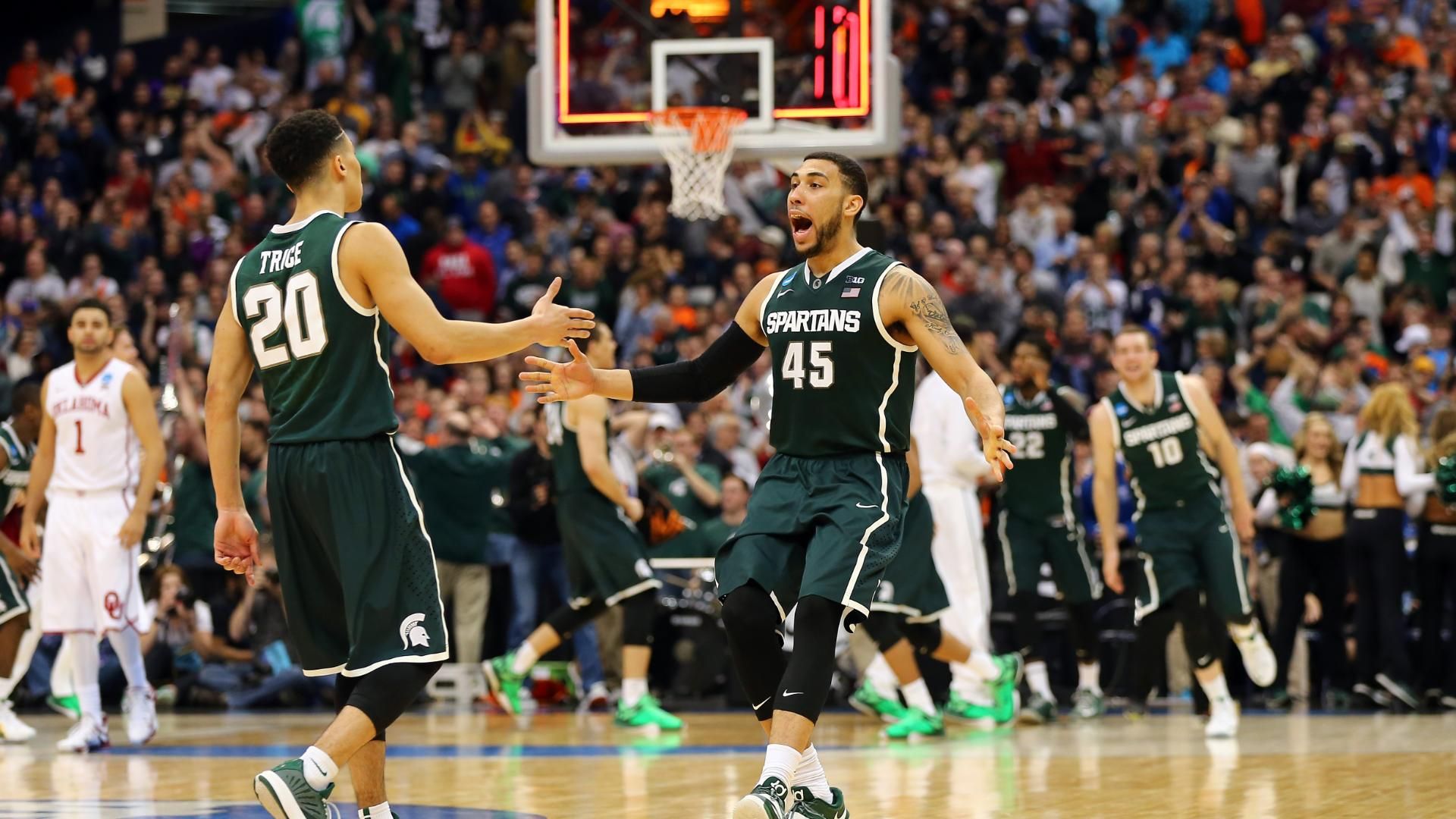 Izzo, Michigan State Are Elite Again
Jeff Goodman discusses Michigan State's win over Oklahoma in the Elite Eight and the upcoming matchup against Louisville on Sunday.