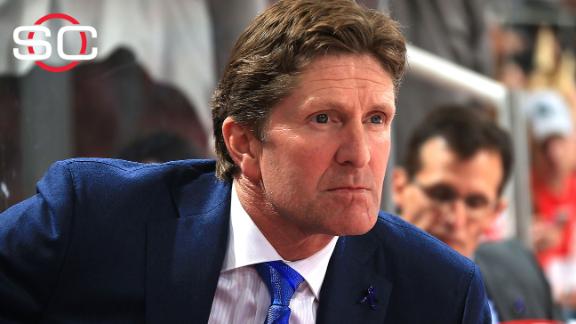 The former Detroit Red Wings coach takes over a team that finished 27th in the league this season. He said at a news conference Thursday that he is taking the job with "eyes wide open."

Babcock spent the last 10 years behind the Detroit bench. His new team is coming off a season that cost head coach Randy Carlyle, interim coach Peter Horachek and many other club officials their jobs.

Babcock arrives with great expectations and a reported $50 million, eight-year contract that makes him the NHL's highest-paid coach. Babcock called the megadeal the Leafs' commitment to success.

Leafs president Brendan Shanahan, who once played for Babcock, has pledged to rebuild the Original Six team that has little to celebrate about in recent decades.

Babcock celebrated his fourth birthday during the 1967 Stanley Cup, the last time the Maple Leafs won the NHL championship.

The Saskatoon, Saskatchewan-raised Babcock, who is married with three children, won the Stanley Cup in 2007-08 and led Canada to gold medals at the 2010 and 2014 Olympics, the 2004 world championships and 1997 world junior championship.

Before deciding on the Leafs, Babcock had been in discussions with several other teams, including the San Jose Sharks and Buffalo Sabres. The Sharks were informed Tuesday night that they were out of the running, while the Sabres received word Wednesday morning, club sources told ESPN.com's Pierre LeBrun.

Though Babcock had discussions with Red Wings general manager Ken Holland about signing a contract extension in Detroit, he ultimately chose to leave the organization with which he had spent the past 10 seasons. Detroit's final offer was believed to be around $4 million per year, a source told LeBrun.

Holland told reporters that Babcock called at 11:15 a.m. ET on Wednesday to inform Holland of his decision. Holland added that he harbored no ill feelings toward Babcock and thanked him for 10 great years.