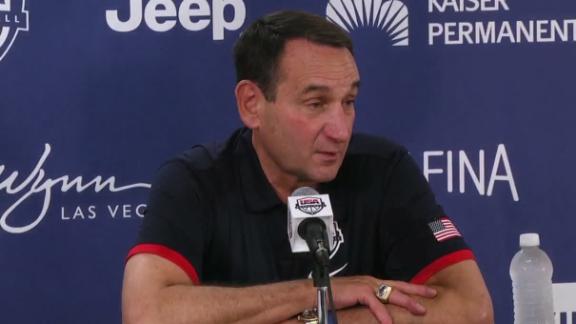 CHICAGO -- For the first time since being fired by the Chicago Bulls last summer, Tom Thibodeau received a big ovation Friday night as he made his return with Team USA.

Thibodeau, who led the Bulls to a 255-139 regular season record over five seasons, is an assistant coach on Mike Krzyzewski's staff. Krzyzewski, a Chicago native was pleased to see Thibodeau being so warmly received.

"He's the best as far as preparation and a team player and the fans appreciate it," Krzyzewski said after Team USA's 80-45 exhibition win over Venezuela on Friday. "[The reaction] was great. I love the fact that my town gave the guy who gave them his heart and soul for the number of years he's been here and acknowledged that. That's a great, great thing. I'm proud of my city for doing that."

Chicago Bulls All-Star and Team USA swingman Jimmy Butler was sitting next to Krzyzewski on the dais after the game.

Krzyzewski felt bad that his long answer about Thibodeau had not allowed Butler, who grew into one of the best two-way players in the game under Thibodeau.

"It's ok," Butler said smiling. "You got it. You said everything I would have said."

The Team USA homecoming for Thibodeau is a precursor to what will likely be an even bigger ovation for the former Bulls coach when his new team, the Minnesota Timberwolves, come to Chicago next season. As he has done since being fired, the veteran coach tried to focus on the positive accomplishments that came from his five years with the Bulls.

"When you look back, you think [of] all the great memories that you had," Thibodeau said recently of being back in the United Center. "I was very fortunate to have the opportunity to coach here, great history, great tradition and we had great guys. It was very enjoyable to coach that team."

Thibodeau was fired from the Bulls in large part because of a broken relationship with the Bulls front office. In his time away from a full-time job, Thibodeau said he visited 13 different teams and and was a frequent guest at various pro and college games.

The basketball lifer was always appreciative of how hard his teams played on a nightly basis and still takes a lot of pride in the success that he and his players earned with the Bulls.

"It's sort of the nature of the league in terms of it doesn't last forever," Thibodeau said. "And that group was a special group of guys. From where it started, and unfortunately the injury derailed it some. But that being said it was a very prideful group, a very proud group."

"They never gave in, they never succumbed to the circumstances no matter who was out. They always found a way to fight," Thibodeau said. "They found different ways to win, different guys stepped up. That's sort of the way the league works. Over time people leave [in] free agency, change teams, so I'm happy for those guys that they're going to get another opportunity and I think they've earned it. Those opportunities came because of the success that they had."

Initially, Krzyzewski joked that he and the rest of Team USA's coaching staff paid fans to cheer for Thibodeau before the game.

"[Jim] Boeheim, Monty Williams and I gave about 5,000 people money so that they would cheer for him and it worked," Krzyzewski said.

Then the Hall of Fame coach got serious about what he thinks of Thibodeau and what he accomplished in Chicago.

"[Butler] plays for Chicago and I grew up in Chicago ... it's an amazing sports town," Krzyzewski said. "It loves its athletes and its coaches. And they should love Tom. Tom brought great basketball here when it was not going well. And then really injury wise -- if one thing, especially with Derrick [Rose], if he had been healthy, there probably, there could have been another [championship] banner or two here and the fans realize that. And then things change -- he's gone off, he holds no resentment. He's been real comfortable [here]."