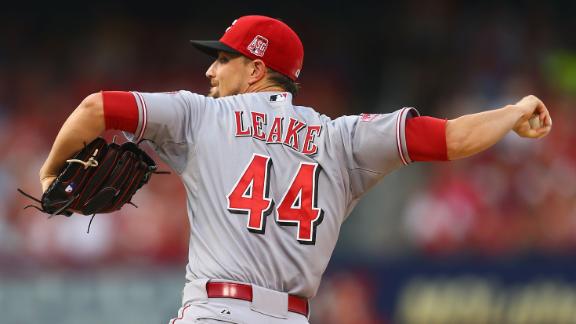 CINCINNATI -- After whiffing on Cole Hamels, the San Francisco Giants got starter Mike Leake from the Cincinnati Reds for a pair of prospects on Thursday night.

The Giants, the defending World Series champions, acquired one of the hottest pitchers in the majors in the past month. Leake, 27, has allowed only two earned runs in 30 innings in his last four starts, all victories.

He threw eight innings of four-hit ball in a 4-0 win in St. Louis on Tuesday, completing his sensational month of July. Overall, Leake is 9-5 with a 3.56 ERA in 21 starts this season.

"We've been exploring and in touch with Cincinnati about Leake since Day 1," general manager Bobby Evans said.

The Giants trail the Dodgers by a half-game in the NL West and are in line for the second wild card behind Pittsburgh. The Reds completed the deal following a 15-5 victory over the Pirates on Thursday night.

San Francisco won World Series titles in 2010, '12 and '14. The Giants thought they needed one more starter to set them up for a down-the-stretch run at another title.

They were interested inCole Hamels, who waived his no-trade clause to consider the Giants but ultimately went to theTexas Rangers. The Giants then went after Leake, who was on their "small list" of pitchers they thought could help them, Evans said.

The move is likely to affect starting pitcherTim Hudson, who is 6-8 with a 4.80 ERA and hasn't gone seven innings in a game since June 3. Hudson won his first championship after 16 major league seasons last year and plans to retire at the end of 2015.

"He ultimately wants to see this club excel and have success and win. He will do whatever it takes."

The Reds got infielder Adam Duvall and right-hander Keury Mella for Leake, who can become a free agent after the season.

Mella, who turns 22 on Sunday, was signed as a non-drafted free agent in September 2011. He went 5-3 with a 3.31 ERA in 16 starts for Class A San Jose this season. He also was on the World team's roster for the All-Star Futures Game in Cincinnati earlier in July.

The Reds' rotation has been decimated in the last eight months. Mat Latos, who pitched for them from 2012-14, was traded to Miami in December and then to the Dodgers on Thursday. Cueto and Leake were dealt in the past week. Homer Bailey had Tommy John surgery and won't be back until sometime next season, leaving rookie starters to finish out the season.