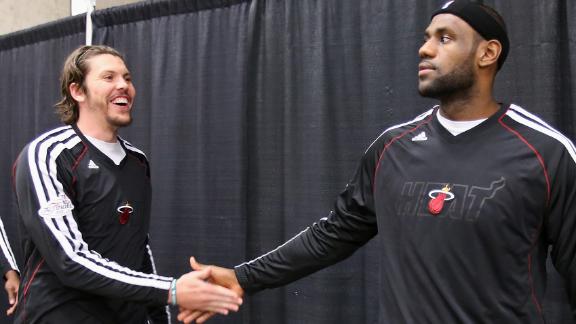 Mike Miller told ESPN Radio on Thursday that he's trying to recruit Ray Allen to sign with the Cavaliers, pointing to the veteran as the kind of player that will help LeBron James and his new team in key spots in the playoffs.

Miller, who agreed to join his good friend James and sign with the Cavs earlier this week, responded "of course," when asked on "The Herd" if he was pitching the Cavs to Allen.

Allen, who will turn 39 on July 20, played 73 games for the Heat in the regular season and all 20 postseason games last season. He averaged 9.3 points per game on 41 percent shooting in the playoffs. Allen has yet to make a decision about continuing his career, though he has talked with multiple teams to investigate his options, sources have told ESPN.com's Brian Windhorst.

"With LeBron James, you are going to win 55 to 60 games regardless. Now it's about what you do in the playoffs. For us, even with the young talent that they have there, you've gotta bring guys that have been there before, even if they are not giving you heavy minutes," Miller said.

"Because those are the guys that understand the preparation, the adjustments, things like that can really bring those guys along. And then you build it from there."

Miller, who is a career 41 percent 3-point shooter, was offered a three-year deal worth $12 million by the Denver Nuggets, but instead opted for a two-year deal worth $5.5 million with the Cavaliers in which the veteran shooter has a player option following next season, a source told ESPN.com's Jeff Goodman.

Miller said he had to put "some thought into it" before making the decision to sign with the Cavs.

"Obviously it's always tough passing up money, but at the end of the day, being able to team up with LeBron again and getting the chance to win a championship again was too much to pass up," he said.

ESPN.com's Marc Stein reported Monday that Houston and Dallas had aggressively entered the bidding in hopes of swaying Miller from choosing Cleveland. But ultimately Miller couldn't resist the opportunity to reunite with James after Miami released him via the amnesty clause in July 2013, in a move which rankled Heat veterans.

Miller said he's "always had a great relationship" with James.

"Obviously we've had some success there in Miami," he said, adding he asked himself the question of why he began playing basketball and the answer on which team to sign with became clear.

"It wasn't for the money, it was for the chance to win championships. At the end of the day, we'll see how it plays out," he said.