Mike Wallace: 'Without a doubt, I'm the fastest player in the NFL' 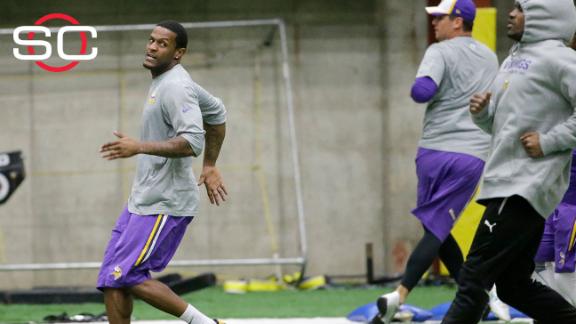 Mike Wallace has proclaimed himself the NFL's fastest player, and he'd be willing to race any challengers to prove it.

"Without a doubt, I'm the fastest player in the NFL," the Minnesota Vikings receiver told the Pioneer Presson Tuesday. "If somebody feels foggy about that, we can [race]. I'm never going to back down from competition.''

The 28-year-old Wallace told the newspaper that his personal best in the 40-yard dash is 4.21 seconds, which would be faster than the best time ever posted at the NFL scouting combine, by running back Chris Johnson (4.24 in 2008).

"I've run a lot of routes and I've got a lot of miles on my legs, but I still feel that there's nobody who can run with me,'' Wallace told the newspaper. "I might have slowed down a little but I could still run 4.25.''

Wallace was acquired by the Vikings this offseason in a trade with the Miami Dolphins, whose quarterback, Ryan Tannehill, was often criticized for not being able to take advantage of Wallace's speed by connecting with the receiver on deep throws.

Wallace, however, said, "I'm not going to blame Tannehill," instead taking the blame himself and vowing to "do better" for the Vikings and quarterback Teddy Bridgewater.