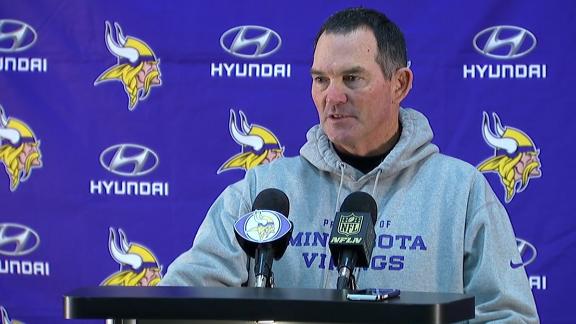 TEMPE, Ariz. -- From what Minnesota Vikings coach Mike Zimmer sees of Carson Palmer, he thinks the Arizona Cardinals quarterback should be considered for the NFL MVP.

"Honestly, watching tape, I hear about all these people talking about MVPs, and he really should be in the consideration with the way he's playing," Zimmer said on a conference call with Arizona media Tuesday morning. "And that's not media talk, either. That's true. That's what I believe."

Zimmer would know, too.

He was the Cincinnati Bengals' defensive coordinator from 2008-2010, Palmer's last three seasons with the team. During that stretch, Palmer missed 12 games in 2008 with an elbow injury, but returned the next two seasons to throw for 3,094 and 3,970 yards, respectively, before getting traded to Oakland midway through the 2011 season.

Palmer, who's led the Cardinals to a 10-2 record, is on pace for the best season of his career. He has thrown for 3,693 yards and 29 touchdowns -- one away from tying the franchise record for most touchdown passes in a season -- with four games left. He leads the league in QBR and is second in quarterback rating and touchdowns thrown.