Mike's Pastry in Boston is full of treats -- and Canes fans 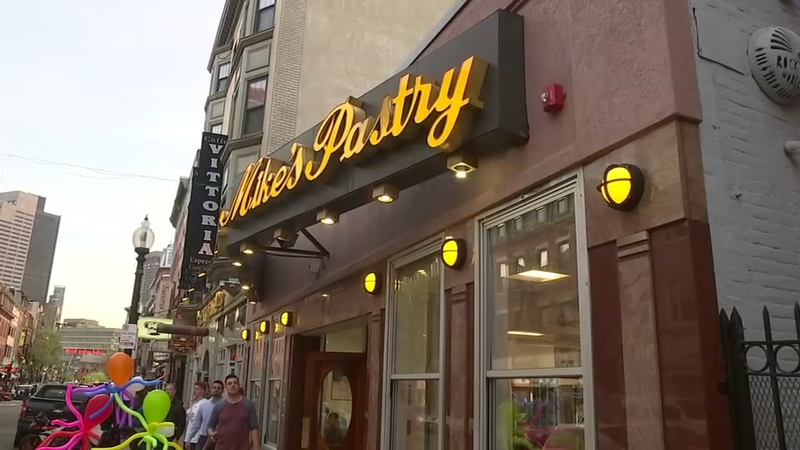 Mike's Pastry in Boston is full of treats -- and Canes fans

BOSTON (WTVD) -- Sheila Crawford grew up in Jacksonville, North Carolina, graduated from NC State University, and now lives in Boston. But her heart is still with the Carolina Hurricanes.

"It's kind of hard," Crawford said. "I'm not going to lie, my dad is from Rhode Island so he was cheering on the Bruins last night. I kind of wanted to join in the cheers but got to support the home team: Go Canes."

Inside Mike's Pastry, we learned Sheila wasn't the only one pulling for the Canes.

"I am rooting for the Hurricanes. Go Canes," said Mike's Pastry employee Valentina Sinani. "I love, and my favorite player in the entire NHL is Dougie Hamilton, No. 19. Go Dougie."

Valentina said Hamilton used to come into the shop at least twice a week when he was on the Bruins and they became friends.

You might find some Canes fans at Boston's Mike's Pastry.

When Hamilton was traded in 2015, it wasn't just his service Sinani missed.

"Pastries was one little thing, but his company was more that was what we missed," she said. "He was a wonderful guy. Very sad, and let me tell you, I was doing my nails and when I saw the tweet (that he had been traded) I was very disappointed. I'm like shocked. What happened?"
Report a correction or typo
Related topics:
sportsraleighmassachusettscarolina hurricanesboston bruinshockey fan
Copyright © 2021 WTVD-TV. All Rights Reserved.
TOP STORIES
CDC expected to backpedal on some masking guidelines
Jan. 6 hearing opens as police detail violence, injuries | LIVE
Simone Biles explains why she 'took a step back' from team finals
'Shocked and disappointed': Vaccinated Cary couple sick with COVID-19
Man pleading guilty to 4 of 8 Atlanta-area spa killings
'This virus is not a joke': FL girl, 15, with COVID on ventilator
Show More
Cary Fenton development announces new retailers
Crocodile bites 18-year-old and drags her into water in Mexico
LATEST: Long haul COVID now considered a disability
Flood on I-95 causes multiple crashes, major delays
Person Co. woman with long-term COVID-19 symptoms urges vaccinations
More TOP STORIES News