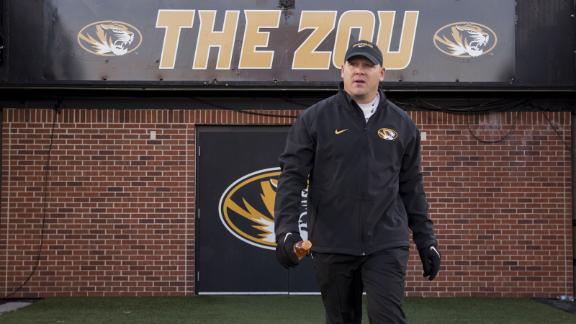 Odom, who agreed to a five-year contract, replaces Gary Pinkel, whose retirement became effective after the Tigers' season-ending loss to Arkansason Nov. 27. Odom, a Missouri graduate, was Missouri's defensive coordinator last season after returning from Memphis.

"I'm tremendously honored to have this opportunity," Odom said in a news release. "Mizzou means the world to me and to my family, and we couldn't be more proud and excited to be in this position."

Odom, 39, was Memphis' defensive coordinator for three seasons under Justin Fuente, who was namedVirginia Techhead coach on Sunday. Odom was the favorite to replace Fuente at Memphis, but the school did not make an attractive offer, so the two parties broke off negotiations, a source said.

"We are extremely excited to announce Barry Odom as the new leader of the Mizzou football program," Missouri athletic director Mack Rhoades said in the news release. "We had the opportunity to visit with a number of excellent coaches throughout our search. At the conclusion of that process, Coach Odom was the clear choice to serve as our next coach."

Memphis hiredArizona Stateoffensive coordinator Mike Norvell as its head coach, according to a source. The school has a press conference scheduled for Friday afternoon.

Odom will be introduced as Missouri's coach in a news conference on Friday afternoon.