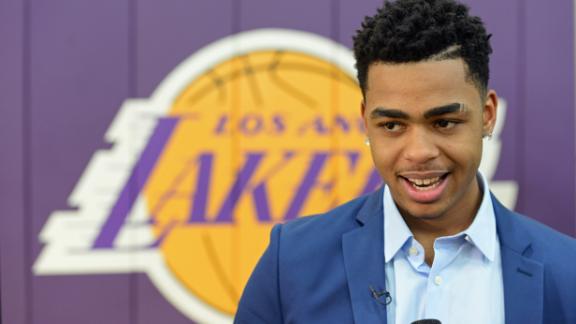 For the third straight summer, free agency didn't unfold as the Los Angeles Lakers had hoped.

They had several big-name targets in mind, yet once again swung and missed, specifically with All-Star forward LaMarcus Aldridge, their main target, who signed with the San Antonio Spurs even after meeting twice with the Lakers.

"No, not at all. It wasn't demoralizing," Lakers general manager Mitch Kupchak said on a conference call Thursday. "It's a part of doing business. There are 30 very, very competitive NBA teams. All general managers are smart. They're armed with brilliant supporting staffs, owners that are very successful, and it's a very, very competitive market. It's unrealistic to think in this day and age that every time you go into the free-agent market that you're going to get exactly who you target."

Through free agency, the Lakers did acquire former Toronto Raptors guardLou Williams, the 2014-15 sixth man of the year, and former Boston Celtics forward Brandon Bass. In a trade with the Indiana Pacers, the Lakers also acquired former All-Star center Roy Hibbert in exchange for a second-round draft pick.

Kupchak responded to reports that the Lakers' presentation to Aldridge, the former Portland Trail Blazers star, went poorly and that the pitch focused too heavily on branding and not enough on basketball. The Lakers tried to sell Aldridge on the marketing opportunities available in L.A., the Los Angeles Times reported.

"I don't think the meeting was as bad as people have heard it was, nor do I think it was as good as we hoped it would be," Kupchak said. "I would just say, 'Live and learn.'"

Asked what the Lakers can learn moving forward, Kupchak said, "Well, you learn how to improve your presentation. Once again, every player is different. You can't have the same presentation for every player.

"In that particular presentation, I've always felt that that player was really underappreciated, and my goal was to make him feel as appreciated as possible. Granted, at the end of the session, we ran out of time and didn't have as much time to talk basketball as we would've liked to have had. It wasn't as intimate a setting as I would've liked.

"On top of that, there was a team waiting in the hallway for us to finish. I think we accomplished the part about how much we wanted this player in Los Angeles, but the basketball component of it I didn't feel was covered in depth. We did get a chance to do that two days later."

One source with knowledge of both meetings said the first meeting took more than an hour before the Lakers laid out a vision for rebuilding their roster and how Aldridge fit into that. The presentation also was wholly lacking in analytics, which appeared even worse after the analytics-minded Houston Rockets followed them into the room late on June 30.

After getting feedback on Aldridge's reaction to their presentation, the Lakers requested and were granted a second meeting.

Kupchak added, "We'll get better at it. Our team will get better. We'll be more attractive. We continue to have financial flexibility going forward. A lot of the teams that were presenting initially got a lot of credit for great presentations, and then, at the end of the day, I saw a clip of [Spurs] coach [Gregg] Popovich having lunch and then maybe a glass of wine with a player, and that sealed the deal."

"Each summer is its own thing," Kupchak said when asked whether there's a trend. "For the veteran free agents, they're looking, clearly, for a situation where they feel they fit best, and most of the time that's to win right away.

"And the last two summers, we were not a team that I think they felt -- and I would agree -- that could contend for a championship. So we take each summer by itself, and I'm hopeful that our players get another year under their belt this year and we become a team that has a core of players with some experience that maybe free agents down the road will look at and say, 'Hey, I want to play with those guys.'"

Asked whether the Lakers, as currently constructed, could make the playoffs this coming season, Kupchak said, "It's a little early, but I would say yes. ...I don't see why we don't contend for a playoff spot. But our young players have to grow beyond their years, and we have to stay healthy."

The 2015-16 season also marks the final year of Kobe Bryant's contract; he is slated to be paid a league-high $25 million. Bryant will be 37 when the season begins and is still rehabbing from a season-ending right shoulder injury he suffered in January.

"We've added some veterans that I think will make him happy. And there will be some younger players that will frustrate him," Kupchak said of Bryant. "That's just the way it is. To be honest with you, I think his focal point going into the season will be his own conditioning and his own health. I think that has the potential to frustrate him more than anything."

Kupchak said he saw Bryant recently and that Bryant has full range of motion in his shoulder but has not started shooting the ball yet.

"It's still pretty early; it's only mid-July," Kupchak said. "He's fighting Father Time, and I've got no doubt that he'll be in great shape, and when he comes to camp, he'll be leading the group when they come to springs and lines and suicides, and he'll show great grit during practice. But I think he's most concerned with not so much his conditioning, which he can control, but it's how is he going to be effective as he gets older."

Speaking of the roster, Kupchak said he doesn't believe the team has any needs to fill.

"We have some great talent, but they're very inexperienced," he said. "And we have some players with a lot of experience, but they're not as young as they used to be. So it's not a perfect roster, but I like the balance of the roster."

What's next for Lakers?
Israel Gutierrez explains why the Lakers are trending down and how it's up to D'Angelo Russell to save the franchise as Kobe Bryant is on his way out.