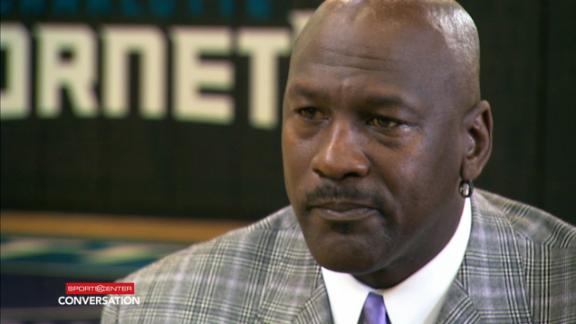 CHARLOTTE, N.C. -- Lance Stephenson could be the missing piece to the championship puzzle Michael Jordan is trying to build with the Hornets.

At least the Hornets owner believes Stephenson gives his team a fighting chance.That's if the often volatile 6-foot-5, 230-pound swingman can control his unpredictable behavior.

Jordan believes the Eastern Conference title goes through LeBron James -- now in Cleveland -- and he was impressed with how Stephenson battled James in Miami last season when Stephenson was with Indiana.

"One of the reasons why I admire his game is he takes on challenges," Jordan said Tuesday. "For us to get any place in the East, we need someone to challenge LeBron. He challenged LeBron."

Jordan said he doesn't advocate all of Stephenson's antics, but he couldn't overlook his competitiveness.

Stephenson has vowed "to calm down and be more focused."

Jordan is counting on it. He rolled the dice in what could be the biggest offseason bargain, signing Stephenson to a three-year, $27 million deal after a take-it-or-leave-it offer to the free agent. The Hornets initially went after restricted free agent Gordon Hayward, but the Utah Jazz matched their $64 million offer sheet.

Stephenson could prove to be a better fit because of his toughness and playoff experience.

Jordan likens Stephenson to former Chicago Bulls teammate Dennis Rodman, a free spirit who insisted on doing things his own way while in the NBA. Jordan said he's not going to try to change Stephenson's personality and will give him his freedom -- to a degree.

"If I feel like he's going the wrong way, that is when I will step in, like most parents do, and say, 'Look you need to focus on this and think about that,'" Jordan said.

The internal intensity and sometimes uncontrollable competitive drive undoubtedly cost Stephenson money during free agency, and he knows the Hornets can't afford the distractions on the floor.

"I have to cut down on the antics," Stephenson said. "I have to do whatever it takes to stay on the floor. If I get too much into the antics and get teched out, I can cost the team."

Larry Bird couldn't completely exorcise Stephenson's demons with the Pacers, and the Jordan-Stephenson partnership will be one of the most intriguing to follow this season.

When Jordan met with Stephenson and his agent in mid-July in Las Vegas to discuss a contract, he told the swingman that Al Jefferson was the focal point of the offense, Kemba Walker was a rising star and Stephenson could be a great complementary piece.

Stephenson doesn't remember much of the conversation, saying he was starstruck meeting his childhood hero. Stephenson said he has collected every pair of Jordan-brand sneakers that have hit the shelves since coming into the league.

"I was in a daze," said Stephenson, entering his fifth NBA season. "I'm like, 'I'm talking to Michael Jordan right now.' And I'm just shaking and sweating."

Still, Stephenson walked away feeling like Jordan believed in him and saw his potential.

He's excited to have the opportunity to learn from arguably the game's greatest player and said he is willing to do whatever it takes to will his team to a win.

"I saw that a lot with Jordan. There were games where he was losing and he came out of nowhere and just started destroying the other team," Stephenson said. "That is the type of guy I am. I'm going to try to bring that type of mentality to this team."

The kid whose nickname is "Born Ready" created a stir when he started trash-talking James during the Eastern Conference finals -- on and off the floor. He even bent over and blew into James' ear during Game 5, drawing the ire of Bird.It capped a year in which Stephenson was whistled for 17 technical fouls -- three in the postseason.

Nonetheless, Pacers coach Frank Vogel said Stephenson is one of the most coachable players with whom he's ever worked. He and Hornets coach Steve Clifford believe Stephenson could become a perennial All-Star.

Stephenson and former Pacers teammate Roy Hibbert dined together in Charlotte prior to a Pacers-Hornets preseason game. He said he could tell Stephenson had matured.

Hibbert, who didn't want to see Stephenson leave, said it might be just what Stephenson needed.

Walker, who grew up playing against Stephenson in New York, is already a fan.

He said Stephenson "will take this team to another level."

That is Jordan's plan.