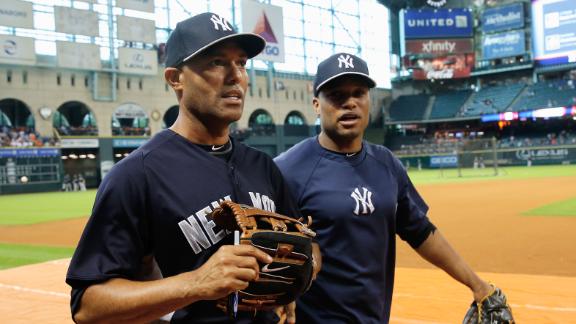 Former Yankees closer Mariano Rivera writes in a new book released Tuesday that Dustin Pedroia of the Boston Red Sox would be his ultimate choice as a second baseman, saying he doesn't think former teammate Robinson Cano "burns to be the best."

Rivera played with Cano for the first nine seasons of the second baseman's career -- before Rivera retired after last season and Cano left as a free agent to sign a blockbuster contract with the Seattle Mariners.

Rivera's thoughts were revealed in excerpts of "The Closer" published in advance of Tuesday's release date by the New York Daily News.

"This guy has so much talent I don't know where to start," Rivera writes of Cano. "... There is no doubt that he is a Hall of Fame caliber [player]. It's just a question of whether he finds the drive you need to get there. I don't think Robby burns to be the best. ... You don't see that red-hot passion in him that you see in most elite players."

It's former longtime rival Pedroia to whom Rivera pays the ultimate compliments.

"Nobody plays harder, gives more, wants to win more. He comes at you hard for 27 outs. It's a special thing to see," Rivera writes of Pedroia, according to the Daily News.

He added: "If I have to win one game, I'd have a hard time taking anybody over Dustin Pedroia as my second baseman."

Pedroia made himself scarce in the Red Sox's clubhouse before Tuesday's game, but manager John Farrell did weigh in on Rivera's thoughts.

"Not surprising,'' Farrell said. "I think [it's] an incredible compliment from your opponent across the field, and maybe allows us to take a step back and really appreciate--I don't want to say what we take for granted, but what we see day in and day out.''

Rivera also says he advised Derek Jeter in spring training last year to be cautious in his return from a broken ankle.

"I know how much you want to start the season, but you need to be careful and not rush back ... because if you push it too much too soon, it could backfire," Rivera writes.

Jeter played in only 17 games while dealing with various injuries in 2013 before returning this year for his final season before retirement.

"Derek is one of the most driven people I've ever known. It's what makes him great. But I also think in this case his drive just blinded him -- and maybe everybody else, too," Rivera writes, according to the Daily News excerpts.

Rivera touches on his faith and family life in "The Closer," according to the Daily News, and how he leaned on both to negotiate difficult times, including the aftermath of his blown save in Game 7 of the 2001 World Series at Arizona, and the flight home.

"Clara and I sit in my row -- 29. I have my Bible and I have Clara," Rivera writes. "The tears do not stop. They don't stop for the whole trip across the country."

Rivera also reflects on the dominance of the late 1990s Yankees.

"Those teams of ours that won four World Series in five years would've hammered [the Marlins]," Rivera writes of the team New York lost to in 2003 in six games. "They would've found a way and will their way through as a team."