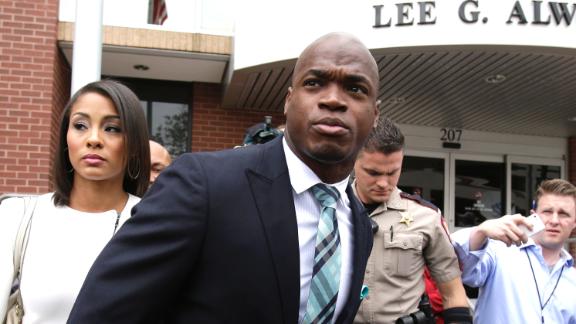 MINNEAPOLIS -- The mother of Adrian Peterson's son agrees with the plea deal the Minnesota Vikings star reached on Tuesday and doesn't want Peterson's career to be harmed by the child abuse case that has already taken the running back off the field for eight games this season, according to a statement released by her attorney.

Peterson pleaded no contest Tuesday to one misdemeanor count of reckless injury to a child, after he injured his 4-year-old son in May while disciplining him with a wooden switch. He hasn't played since the Vikings' season opener Sept. 7 and is awaiting a decision from NFL commissioner Roger Goodell about whether he will face additional league sanctions or be allowed to resume his career.

In a statement, attorney Kelly Dohm said "the entire matter has been very difficult for all involved parties." The statement did not name the boy's mother but said, "She has valued her friendship with Mr. Peterson over the last seven years. She and Mr. Peterson have shared a parental relationship for four years with a fun, beautiful little boy. My client knows that Mr. Peterson loves their son very much and has confidence that he will remain an involved parent with their son throughout his life.

"My client asks the media and the public to respect her and their son's privacy. My client has no interest in Mr. Peterson's career being harmed and hopes that the NFL will not impose any additional punishment on him."

Peterson's attorney, Rusty Hardin, said on ESPN's "Mike & Mike" on Wednesday that Peterson never intended to injure his son while administering discipline in May, and while Hardin added that Peterson has not changed his mind about the usefulness of corporal punishment, he was sorry for what happened to his son.

"He loves his son. He wants to get back in a relationship with him," Hardin said. "He obviously hates what has happened to him and his reputation and the public perception. This is a guy who was incredibly active with his foundation, did all kinds of things for kids, had a great relationship with his kids, and all of that has just been tremendously disheartening for him. But on the other hand, he's an optimistic guy, and he's a workout fiend. All he's had time to do while he's sat and waited for this to be resolved is to work out, so he's probably in better shape than if he had been playing.

"He wants to rehabilitate his image within the public, and people's perception, because he and everybody close to him knows that it's a wrong perception. He's a caring and loving father. He loves kids, and he hates that this happened."

Hardin said he hopes Peterson "doesn't fall prey to all these publicized events involving other people, which had nothing to do with his situation." He said a grand jury informed him Sept. 4 that it had declined to charge Peterson only to return on Sept. 11 and tell Hardin it was reconsidering Peterson's case, three days after a surveillance video of Ray Rice abusing his then-fiance surfaced on TMZ.

In conjunction with his first court appearance on Oct. 8, Peterson admitted to a worker conducting his drug test that he "smoked a little weed." That admission, according to ESPN NFL Insider Ed Werder, could factor into Goodell's review of whether to reinstate Peterson, though Hardin said Peterson told the truth when he could have lied about smoking marijuana.

"I'm not saying he gets special credit for doing something the law says he shouldn't do," Hardin said. "People make mistakes. He made a mistake. That doesn't make it right. It doesn't excuse it. It does mean that when he does accept his responsibility, he should be allowed to move forward."