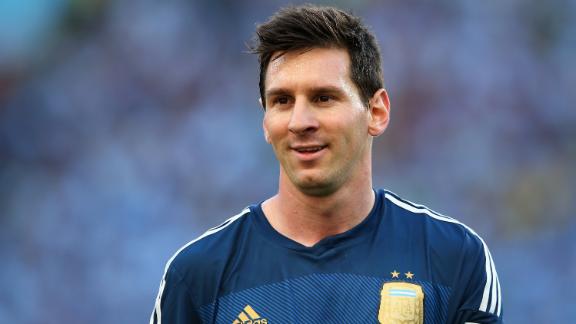 Jose Mourinho has claimed Lionel Messi does not need to win the World Cup to be considered an all-time great.

Messi, 27, led Argentina to the 2014 World Cup final but they lost 1-0 to Argentina after extra time leading to questions about whether the player can be ranked alongside countryman Diego Maradona and Brazil's Pele.

But Chelsea manager Mourinho, who had a tempestuous relationship with Barcelona during his time as Real Madrid manager between 2010 and 2013 has defended Messi.

"It's easy to respect him when he has won but when he has lost, it's not so easy," Mourinho told Yahoo! Eurosport.

When asked if Messi should be considered a scapegoat for Argentina's defeat, Mourinho added: "Not at all. I think in the first half he had fantastic options."

Mourinho instead laid the blame at the feet of Argentina manager Alejandro Sabella over his withdrawal of Ezequiel Lavezzi for Sergio Aguero at half-time.

"I would like to know why Lavezzi stayed in the dressing room at half-time," Mourinho said. "Argentina had been playing with two lines of four, with Enzo Perez closing Philipp Lahm and Lavezzi doing the same on the other side. Because they were so compact Messi could walk while defending and then when he got the ball he had the energy to make the difference.

"When Sabella brought Aguero on for Lavezzi, Argentina changed from a 4-4-2 to a 4-3-3 and they lost a lot of balance. Messi had to run much more after Lavezzi went off.

"The team lost balance and especially energy -- energy that they needed in extra-time."