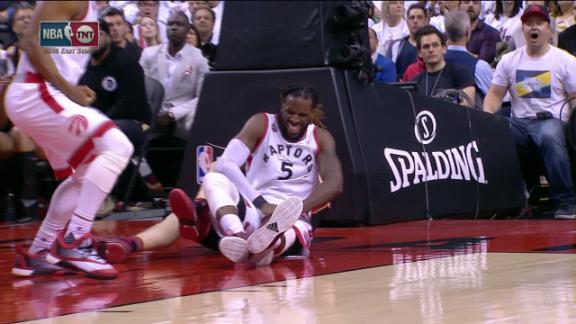 Miami Heat forward Luol Deng is questionable for Game 6 of the Eastern Conference semifinals after an MRI showed he suffered a bruised left wrist, the team announced Thursday.

Deng, who suffered his injury in the third quarter ofToronto's 99-91 Game 5 win, saidWednesday night that he was hoping to play in Game 6 on Friday (ESPN, 8 p.m. ET).

"Right now we're just being smart," Deng said after suffering the injury. "I have to know what it is. As long as it's nothing serious, I will be out there Friday [for Game 6]."

In addition, Heat coach Erik Spoelstra said Thursday thatHassan Whiteside, who missed Games 4 and 5 with a right MCL sprain, will continue to get rest and rehab. The team later released an injury report saying Whiteside would be out of Game 6.

The Heat aren't the only ones battling injuries in this series.Raptors forward DeMarre Carroll also suffered a wrist injury in the third quarter of Game 5.

Carroll suffered his injury after being called for an offensive foul on a drive to the rim. After going down, he clutched his left wrist and was eventually escorted off the court and into the locker room by the team trainer.

The Raptors announced Thursday that tests taken after the game were negative. Carroll's left wrist contusion will be treated symptomatically, and he is questionable for Game 6 at AmericanAirlines Arena.

The Raptors already are without centerJonas Valanciunas(ankle sprain) for the rest of the series. Guard DeMar DeRozan aggravated his right thumb injury early in the fourth quarter but later returned to Wednesday's game.

ESPN's Mike Mazzeo and Michael Wallace contributed to this report.