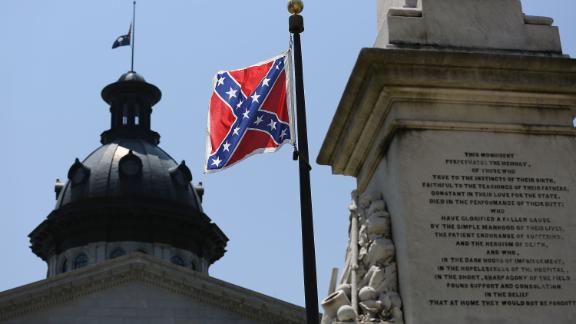 NASCAR, a sport with deep Southern roots, issued a statement Tuesday supporting the movement to take down the Confederate flag from the South Carolina Statehouse grounds. The racing sanctioning body also reiterated its stance that while it discourages its use, it will not ban the flag from being flown by fans during race weekends.

Since the killings, photos have emerged of Roof posing with the Confederate flag, a symbol often used by white supremacists but also embraced by those who see it as a symbol of Southern heritage.

"As we continue to mourn the tragic loss of life last week in Charleston, we join our nation's embrace of those impacted," NASCAR said in a statement released Tuesday afternoon. "NASCAR supports the position that South Carolina Governor Nikki Haley took on the Confederate Flag on Monday.

"As our industry works collectively to ensure that all fans are welcome at our races, NASCAR will continue our long-standing policy to disallow the use of the Confederate Flag symbol in any official NASCAR capacity."

NASCAR fans often fly flags from their campsites and motor homes while camping at the track. The Confederate flag, while not as common as in the past, still is the flag of choice of some NASCAR fans, especially at places in the Deep South such as Darlington Raceway in South Carolina. NASCAR has supported a program that would exchange flags of NASCAR drivers for Confederate flags at tracks.

"While NASCAR recognizes that freedom of expression is an inherent right of all citizens, we will continue to strive for an inclusive environment at our events," NASCAR said in the statement.

International Speedway Corp., the track operating company that owns Darlington Raceway, does not allow the sale of merchandise that include the Confederate flag at its 12 Sprint Cup tracks. Speedway Motorsports Inc., the operator of eight NASCAR tracks, as well as the independently owned Indianapolis Motor Speedway and Pocono Raceway also have bans on those items being sold.

"We join NASCAR in support of South Carolina Governor Nikki Haley's position on the Confederate flag," ISC president John Saunders said in a statement. "ISC strives to ensure all fans are welcome to enjoy our events and maintains an inclusive environment at our facilities nationwide.

"ISC will continue our long-standing practice to prohibit the sale of Confederate flag material on our property."

The majority of stock in ISC is controlled by the France family, which also owns and operates NASCAR.

In 2012, Phoenix International Raceway planned to have golf star Bubba Watson drive the "General Lee," the car he owns from "The Dukes of Hazzard" television series, in a parade lap before its March race. NASCAR balked because the car has a Confederate flag painted on the roof (as it appeared on the show), and after conversations with track officials, those plans were canceled.

There is one African-American full-time driver -- Roush Fenway Racing's Darrell Wallace Jr., who competes in the Xfinity Series -- in NASCAR's three national divisions. NASCAR operates a "Drive for Diversity" program that awards driving and mechanic opportunities to minorities.

Carolina Panthers officials said Tuesday there are no plans to move the NFL team's training camp out of South Carolina if the flag remains on the Statehouse grounds.

But speaking for owner Jerry Richardson, spokesman Steven Drummond said: "Our organization prides itself on bringing people together. Divisive symbols and actions should not stand in conflict to progress, healing and the unification of all of our citizens."