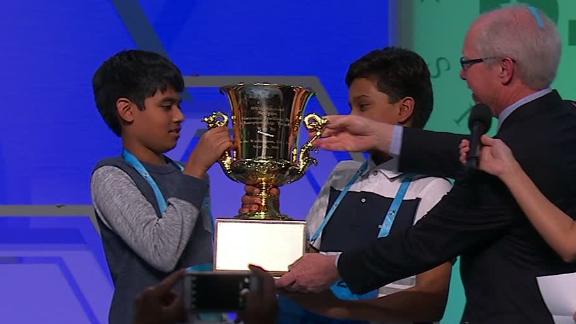 OXON HILL, Md. -- The words were tougher. The final rounds lasted longer. The result was the same.

The Scripps National Spelling Bee ended in a tie for the third consecutive year Thursday night, with Jairam Hathwar and Nihar Janga declared co-champions after a roller-coaster finish.

Jairam, 13, is the younger brother of 2014 co-champion Sriram Hathwar. Nihar, at age 11, is the youngest winner of the bee on record.

"I'm just speechless. I can't say anything," Nihar said as he hoisted the trophy. "I mean, I'm only in fifth grade."

Scripps made the bee, broadcast on ESPN, tougher after two consecutive ties, forcing the last two spellers to get through three times as many words as in years past.

Jairam, of Painted Post, New York, misspelled two words. But both times, Nihar, of Austin, Texas, followed up with a miss, and the bee continued. Sriram also got a word wrong during his bee, but his eventual co-champion, Ansun Sujoe, flubbed his chance at the solo title.

"I thought it was over, because Nihar is so strong, such a great speller," Sriram said.

"When I missed those two words, I didn't let them get to my head, and I just focused on the next word," Jairam said.

In another change, bee organizers didn't stick to a predetermined list of "championship words" for the last two or three spellers. No one will know whether the bee had harder words in reserve, but former spellers said Jairam and Nihar nailed the toughest words in recent memory.

Because the best spellers become fluent in Latin and Greek roots, the bee went to words derived from trickier and more obscure languages, including Afrikaans, Danish, Irish Gaelic, Maori and Mayan.

Jairam's winning word was Feldenkrais, which is derived from a trademark and means a system of body movements intended to ease tension. Niram won with gesellschaft, which means a mechanistic type of social relationship.

At his best, Nihar wowed the crowd by shouting out definitions immediately after the words were announced. He looked unbeatable. But given two chances to hold the trophy by himself, he stumbled.

Nihar was in his first bee and would have had three more years of eligibility, but he can't compete again since he won. This was the 89th bee, and while Scripps' records from early years are incomplete, the youngest known champion was Wendy Guey, who won 20 years ago at age 12. The last to win in his first attempt was Pratyush Buddiga in 2002.

Nihar said he didn't feel pressure to become the youngest winner for two reasons. First, he never expected to win. Second, most of the crowd's attention was on an even younger speller: 6-year-old Akash Vukoti.

"He did pretty good for a first-grader," Nihar said. "He's going to go places."

Nihar and Jairam have become close friends over the past year, but Nihar said he didn't consider misspelling on purpose when he had chances to win. He just didn't know the words.

"I wanted to win, but at the same time I felt really bad for Jairam," Nihar said.

Nihar's and Jairam's parents are immigrants from south India, continuing a remarkable run of success for Indian American spellers that began in 1999 with Nupur Lala's victory, which was later featured in the documentary "Spellbound." The bee has produced Indian American champions for nine straight years and 14 out of the past 19.

Before 2014, the bee hadn't declared co-champions in more than 50 years, but now, it seems little can be done to avoid it. The competition concluded shortly before 11 p.m. ET, with the winners having spent seven hours on stage, and bee executive director Paige Kimble has said she wouldn't consider forcing the final spellers to keep going indefinitely.

Snehaa Kumar of Folsom, California, finished third, and Sylvie Lamontagne of Lakewood, Colorado, was fourth. Both are 13-year-old eighth-graders, meaning this year was their last chance. 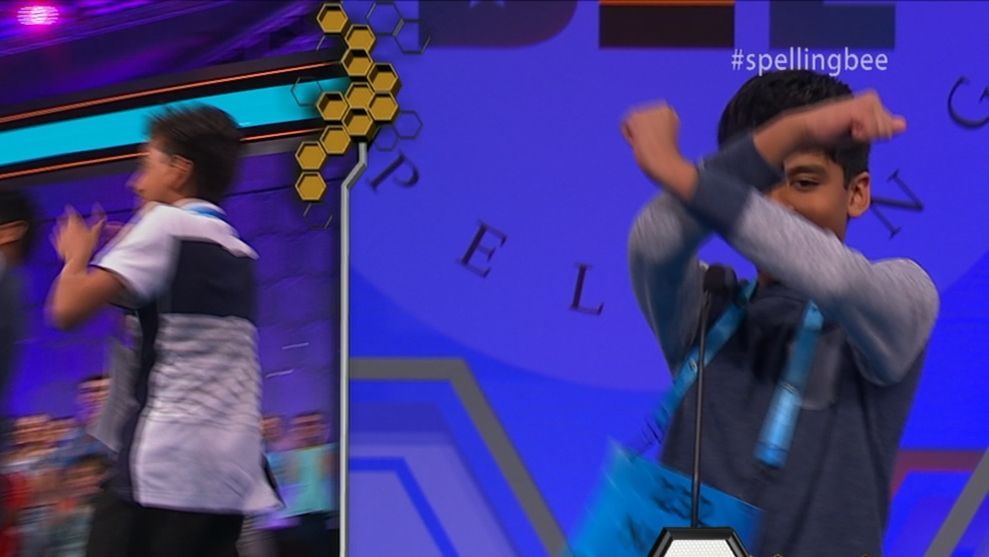 #ICYMI: The 2016 spelling bee
From dabbing to throwing up the X, the spelling bee had plenty of entertainment value besides impossible-to-spell words. 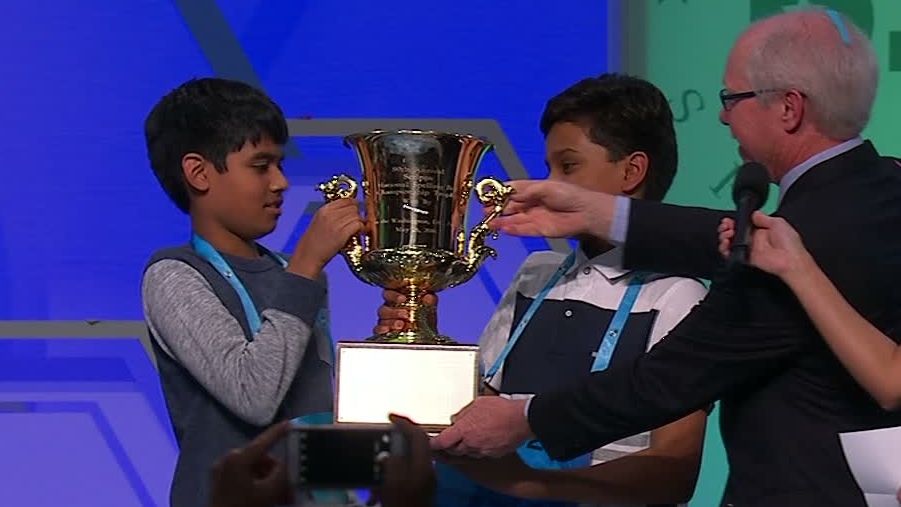