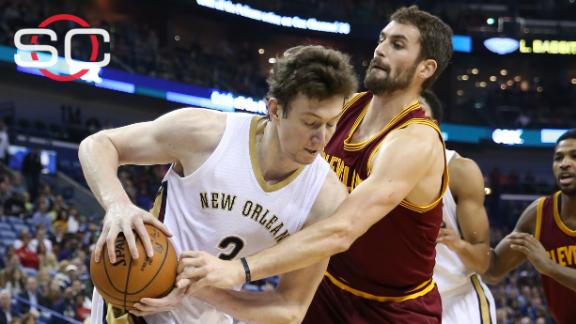 That was the sound of the day as dollar bills were flying around the NBA at a mind-boggling rate amid a flurry of deals on the first full day of NBA free agency.

According to ESPN Stats & Information, NBA teams agreed in principle to pay over $1.4 billion in salary to players on Wednesday.

And that doesn't even include the five-year extension estimated at nearly $145 million that Anthony Davis received from the New Orleans Pelicans.

Nor does it account for what will be given to LaMarcus AldridgeorDeAndre Jordan, who have yet to agree to deals as they make the rounds and meet with potential suitors. Or Dwyane Wade, who has yet to decide whether he'll return to the Miami Heat.

Seven teams guaranteed over $100 million in agreements on Wednesday, including theCleveland Cavaliers, who agreedto terms with Kevin Love and Iman Shumpert for a combined $150 million and neared agreement with Tristan Thompson for another $80 million.

One by one, moves were made and huge contracts were agreed to, though players can't be signed until July 9, after next season's salary cap is set.

An alarming thought is that with next year's new TV contracts, Wednesday's benchmark might seem tame one year from now.

Hall of Fame guard and television analyst Reggie Miller was awed by the spending, even joking on Twitter that he was angry at his parents for his being born in 1965.