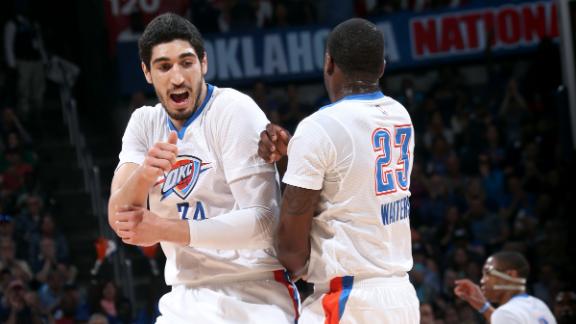 Oklahoma City Thunder star Russell Westbrook has been on a triple-double tear of late, and the only thing that could stop him from another one on Sunday was an NBA ruling on Monday.

The league announced that Westbrook was incorrectly credited with a rebound in Sunday's 93-75 win over the Miami Heat. The correction means the Thunder point guard finished with 12 points, 17 assists and nine rebounds.

Westbrook now has nine triple-doubles on the season for an Oklahoma City team that at 40-30 currently has a 2-game lead for the eighth spot in the Western Conference playoff picture.

With Kevin Durant suffering injuries to his foot and ankle, Westbrook has picked up the slack and has four triple-doubles in the month of March alone. He also had a stretch of four straight stat-stuffing games that spanned from February and into March, with one game missed due to a fractured bone in his face.

Westbrook's output has put him squarely in the conversation for league MVP, as the seventh-year guard is averaging career highs in points (27.5), assists (8.7), rebounds (7.3) and steals (2.2) per game this season.

The Thunder received additional bad news Monday, with The Oklahoman reporting that starter Andre Roberson is out two to three weeks with a left ankle sprain suffered Sunday against the Heat.

The Thunder already were without Durant, Serge Ibaka and Nick Collison due to injury.