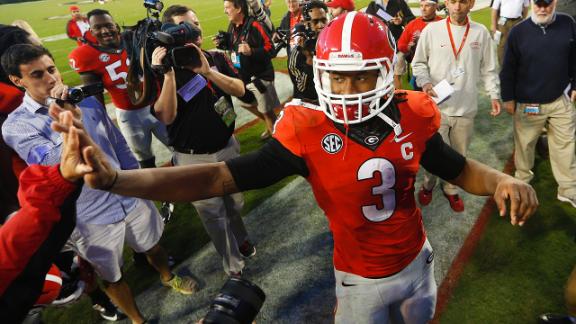 ESPN
By Mark Schlabach
The NCAA announced Thursday night that its Division I Student-Athlete Reinstatement Committee has upheld Georgiarunning back Todd Gurley's four-game suspension, meaning he'll miss the Bulldogs' next two games after sitting out the previous two.

Georgia officials appealed the ruling earlier this week after the NCAA had said that Gurley would have to sit out 30 percent of his team's competition, or four games, for accepting $3,000 to autograph memorabilia for multiple dealers over the past two years.

Gurley, who was a leading Heisman Trophy candidate before the suspension, will miss Georgia's game against Florida in Jacksonville, Florida and next week's game at Kentucky.

"We are very disappointed in tonight's decision by the Division I Student-Athlete Reinstatement Committee regarding our appeal on Todd Gurley's eligibility reinstatement," Georgia said in a statement Thursday. "We believe our case to the NCAA for Todd's immediate reinstatement was strong and compelling. However, we now have exhausted all available options and look forward to Todd's return to competition on Nov. 15. The full attention of Bulldog Nation now needs to be focused on our team and Saturday's important game against Florida."

Georgia (No. 11 CFP, No. 9 AP) has won its last two games without Gurley, as freshman Nick Chubb has rushed for 345 yards and three touchdowns while leading the Bulldogs to road victories at Missouri and Arkansas.

Gurley, a junior from Tarboro, North Carolina, has rushed for 773 yards with eight touchdowns and has averaged 8.2 yards per carry.

Gurley received the cash for signing memorabilia and other items over two years and must repay a portion of the money he received to a charity of his choice and also complete 40 hours of community service as conditions of his reinstatement.

Gurley continued to practice with Georgia during the suspension, and Georgia coach Mark Richt said he had no indication that the running back would not complete the season.

"I don't think there's any doubt Todd is going to finish with honor and have a great finish to his career here at Georgia, whenever it ends,'' Richt said.