NCAA puts Oklahoma State on probation for one year 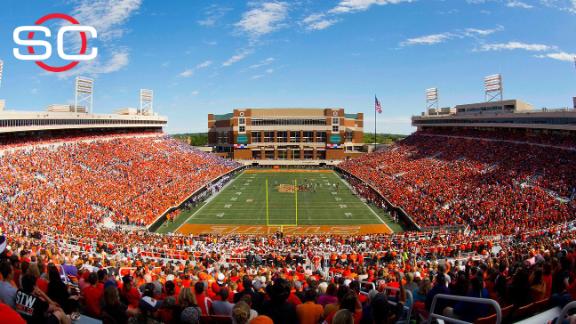 The NCAA has placedOklahoma Stateon probation for one year after finding the school did not follow its drug testing policyand allowed its all-female Orange Pride student group to engage in impermissible hosting activities during football prospects' official and unofficial visits.

Penalties include one year of probation, $8,500 in fines, suspension of the Orange Pride program and university-imposed recruiting restrictions.

"There were mistakes made," said Greg Christopher, who was the NCAA's chief hearing officer on this case and is also the Xavier athletic director. "(But) we didn't believe there was a failure to monitor per se. Because they had a compliance program for a drug policy, they had a drug plan administrator. They had a monitor in place for Orange Pride. The monitoring was there, but it was ineffective."

Oklahoma State will not lose any scholarships or face a postseason ban. The case stemmed from a five-part investigative series by Sports Illustrated into Oklahoma State alleging a series of NCAA violations under coaches Les Miles and current coach Mike Gundy dating to 2001.

The NCAA determined that many of the Sports Illustrated allegations were unfounded after reviewing more than 50,000 emails and other documents and conducting close to 90 interviews of current and former players, coaches, staffers and boosters.

"Some salacious stuff was out there ... a lot of unsubstantiated stuff out there that was not found," Christopher said. "And it was not for a lack of looking. ... We have full confidence in what came out of this."

The NCAA, however, did conclude that from 2008-12 the university violated the NCAA's drug testing policy by allowing five football players to play in a total of seven games when they should have been suspended.

According to the NCAA, Oklahoma State athletic director Mike Holder believed he had latitude in following the drug policy and deferred to coach Mike Gundy's recommendation on whether to suspend players who failed a drug test.

NCAA rules prevent a school from the use of student hosts in a way that is inconsistent with a university's policies on providing campus tours or visits to all prospective students. Oklahoma State will not be allowed to use the Orange Pride program for four years.

The NCAA also upheld Oklahoma State's self-imposed recruiting restrictions, which included reductions in official visits and off-campus evaluations for the next two years.

"The steps Oklahoma State took from a transparency standpoint should be applauded," Christopher said. "This was really one of the most cooperative investigations in recent history."