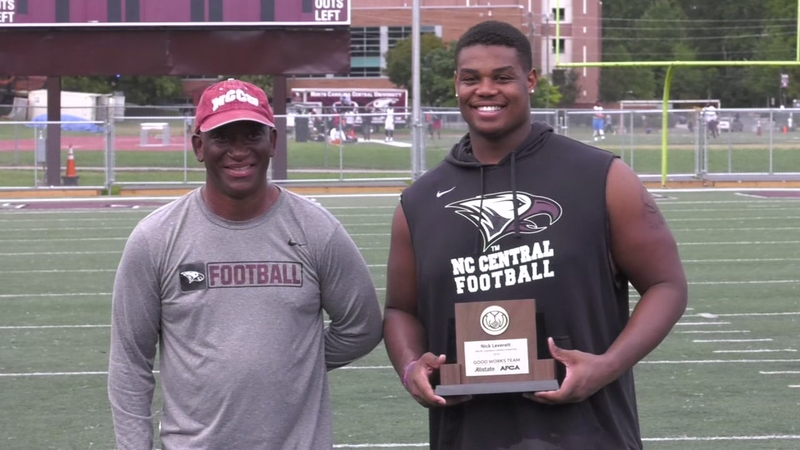 DURHAM, N.C. (WTVD) -- Nick Leverett said Wednesday that he thought he was in trouble when he was called out of an appointment to introduce Michael Vick at NCCU and told to report to the football field. The feeling that something big was happening only intensified when he saw his mother was there, two hours from her home in Concord.

It was the farthest thing from trouble as it turns out.

Leverett is anything but trouble. Since arriving at NCCU he's made it his mission to not only become a great football player but a great student and great ambassador in the community.

I don’t think y’all understand how emotional I was.. this is such a huge honor and a great blessing. Thank you #BullCity. Thank you @NCCU and thank you @NCCUAthletics for everything! Wouldn’t be possible without you! https://t.co/U5QM1qNG52

Mission accomplished on all three. Two times an All-MEAC performer as an Eagles offensive lineman, Leverett got his degree in Criminal Justice in three years and currently boasts a 3.37 GPA in his graduate program.

Most notably - he was named (surprised Wednesday) as one of just 22 members of the nationwide Allstate AFCA Good Works team. Duke's Johnathan Lloyd was also honored.

It's easy to see why Leverett was chosen. Check out the list of his good deeds courtesy of NCCU's athletic website: