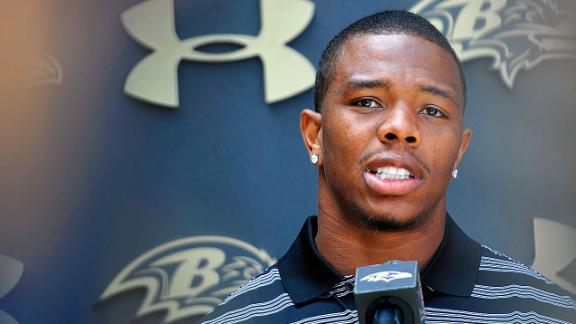 BALTIMORE -- More than 7,000 fans showed up to exchange their Ray Rice jerseys for those of other Ravens players during a two-day event at Baltimore's home, team officials said Saturday.

The Ravens handed out 5,595 new jerseys before running out before midday Saturday, then issued more than 2,400 vouchers for fans to pick up their jerseys once new shipments arrive in October.

Team spokesman Kevin Byrne said the Ravens spent "six figures" on the trade-in. He declined to disclose an exact figure.

Byrne said the jerseys collected by the team will be given to companies that deal in scrap materials.

"The NFL licensed jerseys are not recyclable because of certain materials in parts of the jersey, so what we're going to do is offer them to companies who deal in scrap," Byrne said. "We're not getting paid for it. We'll just give it to them, and they can do with it as they please."

Approximately 15 percent of those who showed up had their jerseys rejected because either they were not officially licensed by the NFL or hadn't been available through the team's online or stadium store. The team offered them token gifts in exchange.

"It's clearly an unusual time for the franchise," Byrne said. "I think the one thing that we've tried to be, historically is that we've been transparent. So this is new territory for us. We're learning as we go."

Fans began lining up as early as 4 a.m. on the first day of the exchange Friday. By the time gates opened at 8 a.m. on Friday, there were estimated to be more than 1,000 people in a line that stretched at least halfway around the stadium.

The most requested jerseys, according to the team, were those of quarterback Joe Flacco and wide receiver Torrey Smith. Five other player jerseys also were available.

Ross Sober and his 9-year-old son, Logan, of Hampstead, Maryland, arrived at around 9:45 a.m. Saturday to find an imposing line that stretched much of the way around the stadium.

Still, they completed the exchange in 50 minutes, turning in two youth jerseys. Both Logan and his 12-year-old brother Griffin were hoping to land Lardarius Webb jerseys before the stock ran out.

Still, their father was quite pleased with the process.

"It was as rosy an event as you could hope for," Sober said. "The people at the counter where we got our voucher were smiling and happy. The guy noticed that we had a Super Bowl patch ironed on, and he ripped the patch off and gave it back to us. It was orderly, it was friendly and nobody was protesting. You couldn't ask for better."