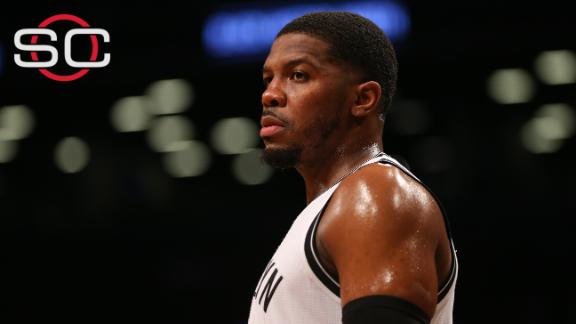 The Brooklyn Netsannounced Thursday afternoon that they've waived Joe Johnsonafter agreeing to a buyout with the former All-Star guard.

Earlier Thursday, ESPN.com's Marc Stein reported that the two sides had opened buyout negotiations. Sources said that Johnson had been sold on the idea of joining a contender for the stretch run if he and the Nets could come to terms on a contract settlement.

A number of likely playoff teams, sources said, are already pursuing Johnson: Atlanta, Boston, Cleveland, Houston, Miami, Oklahoma City and Toronto.Sources said that Johnson, who can't clear waivers until 5 p.m. ET on Saturday, is likely to take a couple of days to sift through the offers.

There is a strong belief within the Cavaliers' organization, league sources said, that they are in prime position to win the Johnson sweepstakes and add him to their title-chasing roster. But sources say the Hawks are likewise planning to make a determined push to persuade Johnson to return to Atlanta.

Because Johnson was released by new Nets general manager Sean Marks by this coming Tuesday, he'll be playoff-eligible for his next team.

Johnson gave back $3 million in remaining salary to move on from Brooklyn, Marks said during an interview Thursday on ESPN New York 98.7 FM.

"It shows Joe's serious about going to a contender. We wish him all the best. He's been part of some great Net memories," Marks said.

Johnson, 34, is earning $24.9 million this season in the final year of a mammoth six-year, $124 million deal that was the league's largest at the time when he signed it with the Hawks in 2010. Brooklyn absorbed the remaining four years and $89.3 million left on Johnson's deal -- soon followed by the acquisitions of Paul Pierce and Kevin Garnett -- in a bid to first persuade then-franchise point guard Deron Williams to stay with the Nets and then to make a run at the NBA championship that Nets owner Mikhail Prokhorov vowed to win within the space of five years.

But the Nets won only one playoff series after acquiring Johnson and don't have control of their own first-round pick until June 2019.

Setting Johnson free is the second significant move for Marks in his first week-plus on the job after Brooklyn released veteran forward Andrea Bargnani.

Marks said it was his call to complete a buyout of Johnson, but Prokhorov was in support of the decision.

"I know [Prokhorov] is very fond of Joe, and it's hard to see him leave, and he would've loved for Joe to have stuck around and been a Net for the rest of this season and beyond," Marks said. "But I think he also realizes the fair thing for Joe would be [for him] to try to get a chance at a championship."

Asked about the potential of Johnson returning to Brooklyn in the offseason, Marks replied: "You never know what's going to happen with the future. But if he ends up somewhere else, we're basically saying, 'Joe best of luck to you and we'll catch up with you down the road. It's been fun.' But I'm not going to rule anything out. But at the same time we've got some different things on our horizon, I guess, right now."

Johnson, who is averaging 11.8 points on 40.6 percent shooting but has seen an uptick in his performance lately, has been best known for his winning shots at the buzzer in Brooklyn. He has seven of them in the past decade, which accounts for the most by any NBA player in that span by a wide margin, according to ESPN Stats & Information.

Information from ESPN.com's Mike Mazzeo was used in this report.