WTVD-AP
NEW YORK -- As is usually the case, players from Triangle schools were expected to hear their names called early Thursday night during the 2019 NBA Draft.

The Atlantic Coast Conference had a big night in the NBA draft, with a record six players go in the lottery section of the first 14 picks.

To no one's surprise, the New Orleans Pelicans made Duke's Zion Williamson the No. 1 overall pick Thursday night. Williamson will take his high-flying power game to New Orleans, a team full of young talent after a monster trade that sent superstar Anthony Davis to the Los Angeles Lakers.

Based on the celebrating crowd jammed into a downtown New Orleans promenade on Thursday night, it appeared Pelicans fans couldn't have been happier to move on from Davis - who requested a trade last January - and welcome their newest hope to transform New Orleans from a languishing small market franchise into an NBA contender.

With the first pick in the 2019 #NBADraft the Pelicans select Zion Williamson from #Duke @ABC11_WTVD pic.twitter.com/zjp7Tame8X

Afterward Williamson couldn't hide his emotions, even though he along with everyone else knew what would happen Thursday night.

"Because I love the game of basketball," he said. "You can hear people say things like, 'Oh, that it was likely I was going to go No. 1.' But I guess you don't know until you actually go through it. Hearing my name called and I was able to make it on stage without a tear, shake the commissioner's hand, but in the interview my mom was standing beside me, and my emotions just took over."

For a New York squad which finished a league-worst 17-65, Barrett theoretically provides the Knicks with another young building block along with small forward Kevin Knox and center Mitchell Robinson. The Knicks selected Knox (No. 9) and Robinson (No. 36) in 2018.

"I just can't tell you how excited we are to be able to land RJ Barrett and add him to the New York Knicks," Knicks GM Scott Perry said in a conference call with reporters a few minutes after the selection was made. "We love a lot of things about this young man starting with his tremendous competitive level; his desire to want to be great as a basketball player. He's highly accomplished. He had a tremendous freshman season here at Duke."

Barrett has New York ties, despite growing up in the Toronto area. His father, Rowan Barrett, played four years (1992-96) at St. John's University before embarking on an overseas professional career,

North Carolina point guard Coby White had to wait a little longer to hear his name called, but it came when the Chicago Bulls made him the No. 7 pick.

Executive vice president of basketball operations John Paxson had said the Bulls would look for an upgrade at the position after Kris Dunn took a step back in his third season. He backed that up by taking the dynamic White, whose wild hairdo is as impressive as his game.

A McDonald's All-American in high school, White made a big impact in his lone season at North Carolina. He averaged 16.1 points and 4.1 assists, helping the senior-laden Tar Heels reach the Sweet Sixteen.

Cam Reddish made it three Blue Devils in the Top 10 when the Atlanta Hawks selected him. He'll join Virginia's De'Andre Hunter, whom the Hawks took at No. 4.

The 6-8, 208-pound Reddish is cut from the same mold as Hunter, but he's coming off an uneven freshman year with the Blue Devils. Reddish arrived in Durham as a top-five recruit but was only the third option behind teammates Zion Williamson and RJ Barrett, both of whom went ahead of him in the draft.

UNC senior Cameron Johnson went No. 11 overall to Minnesota. It's unlikely he'll play for the Timberwolves, as the smooth 6-9 shooter was selected as part of a pending trade to the Phoenix Suns.

Johnson was projected to go later in the first round, but the Suns essentially took him at No. 11, hoping he can give them a sharpshooting duo with Devin Booker.

North Carolina added one final player to the first-round with Nassir Little going No. 25 overall to the Portland Trailblazers. Little was originally projected as a late-lottery pick.

Here's a look at the six prospects from the Tobacco Road ACC schools who were drafted in the first-round. 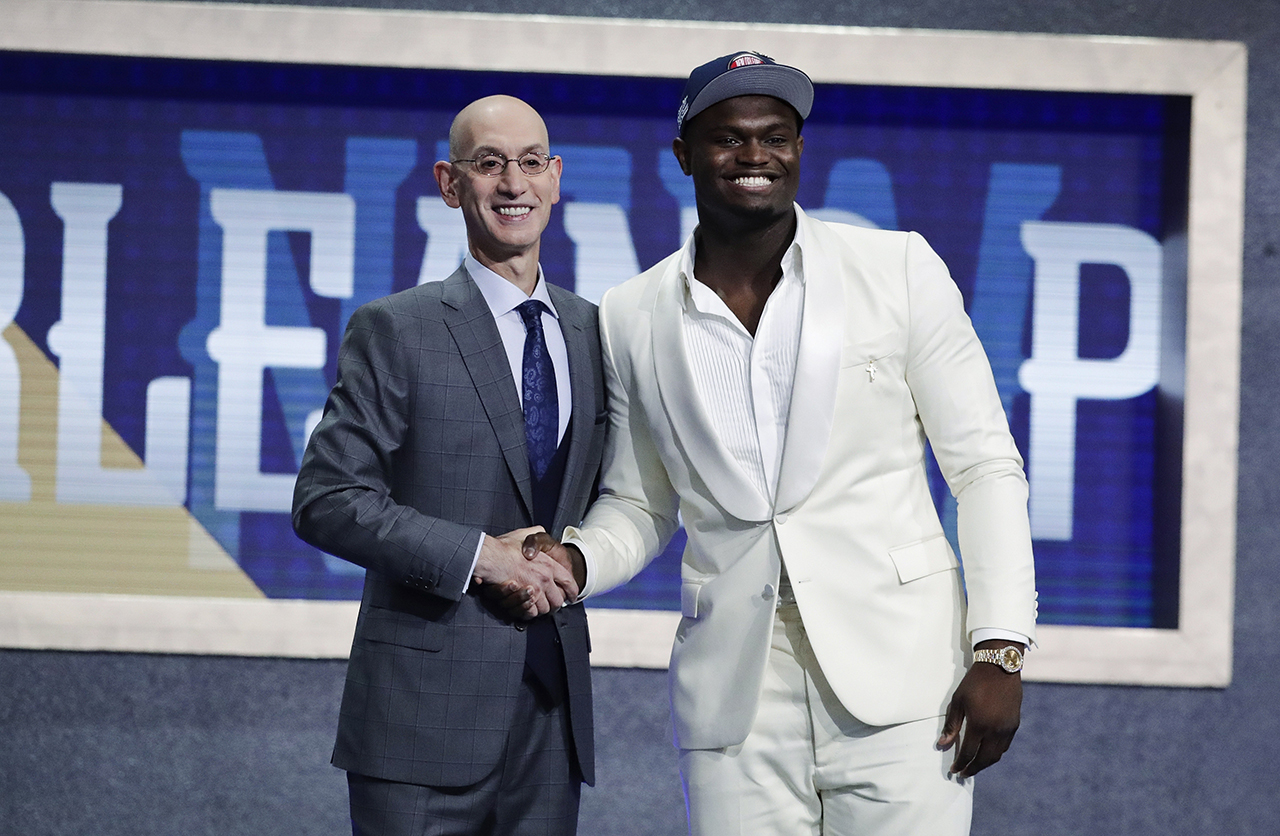 Duke's Zion Williamson, right, poses for photographs with NBA Commissioner Adam Silver after being selected by the New Orleans Pelicans as the first overall pick.

The Associated Press national player of the year could be a franchise-changing talent.

STRENGTHS: The 6-foot-7, 285-pound Williamson blends size, strength and nimble moves in a rarely-seen package. Beyond the highlight-reel dunks, he was practically unstoppable in the open court and when he put the ball on the floor in the paint, both with a quick step to bypass defenders and the strength to overpower them. Williamson averaged 22.6 points and 8.9 rebounds while shooting 68 percent, and was a good--even dazzling at times--passer. He's also a willing defender who can cover a lot of ground, wrestle in the paint and protect the rim (1.8 blocks). 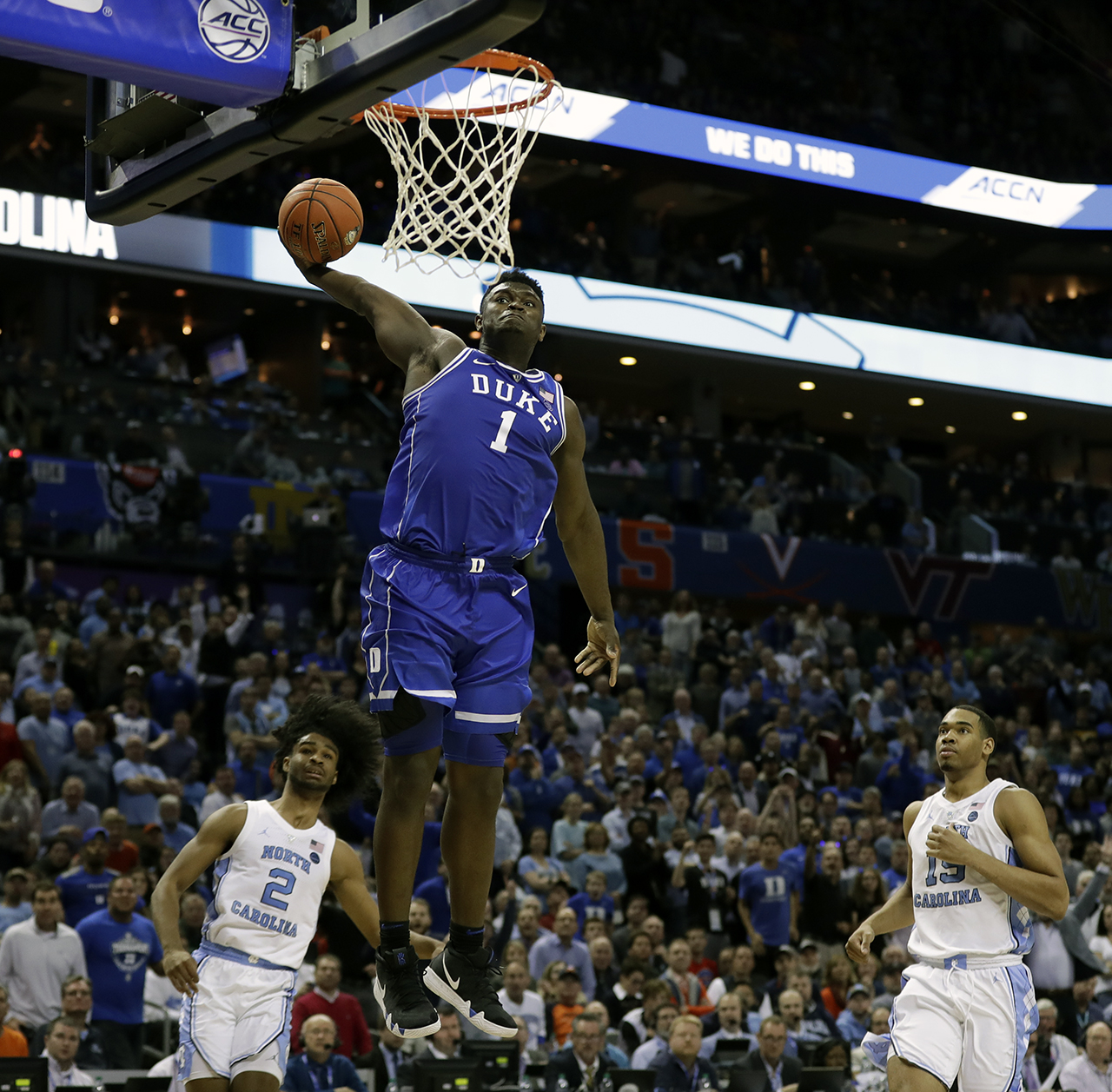 Zion Williamson was the national player of the year in his one season at Duke. 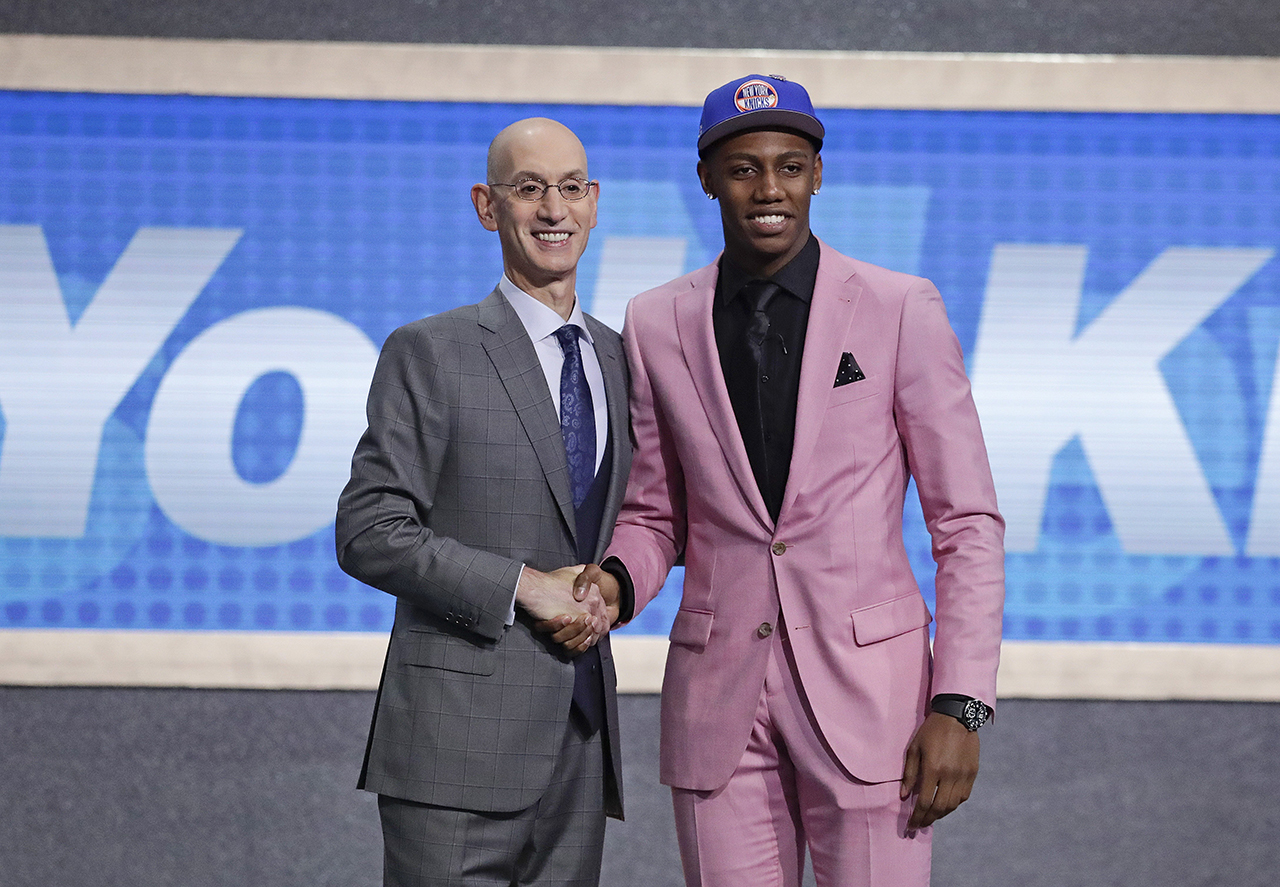 Duke's RJ Barrett, right, poses for photographs with NBA Commissioner Adam Silver after being selected as the third pick overall by the New York Knicks.

STRENGTHS: The 6-foot-7, 202-pound Barrett led the Atlantic Coast Conference at 22.6 points to go with 7.6 rebounds and 4.3 assists. The lefty is a pro-ready scorer who can attack the paint, hit from mid-range or step outside. Barrett was an AP first-team all-American with an ACC single-season freshman scoring record with 860 points - the second best total by any player in Duke history.

CONCERNS: Barrett must improve as a 3-point shooter (30.8 to fully stretch defenses. He also shot 66.5 percent at the foul line, including a critical miss in the final seconds of the NCAA Elite Eight loss against Michigan State. And at times, Barrett's aggressiveness worked against him, such as when he had three shots blocked in the paint in the final minute of the loss to Gonzaga in the Maui Invitational championship game. 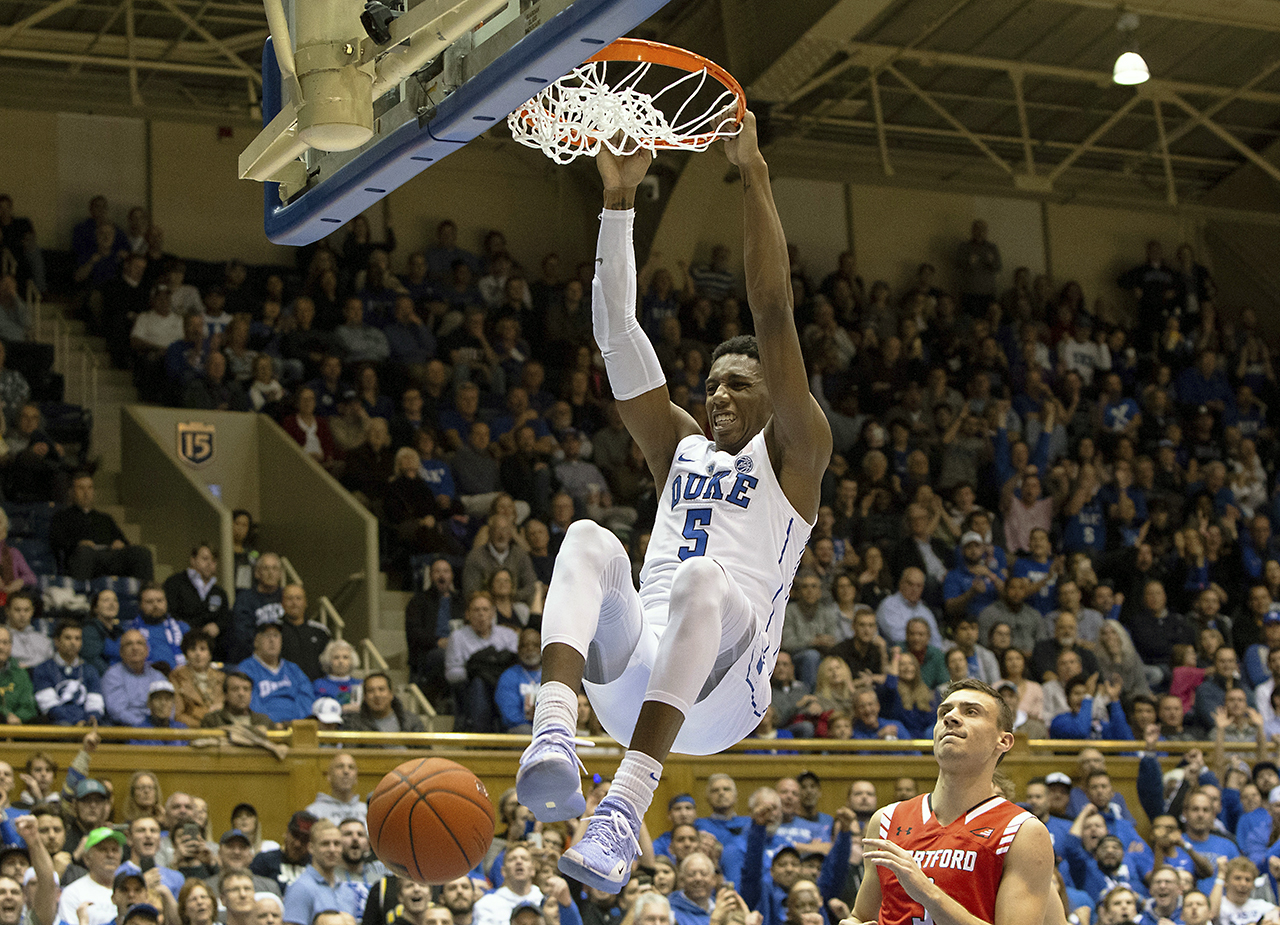 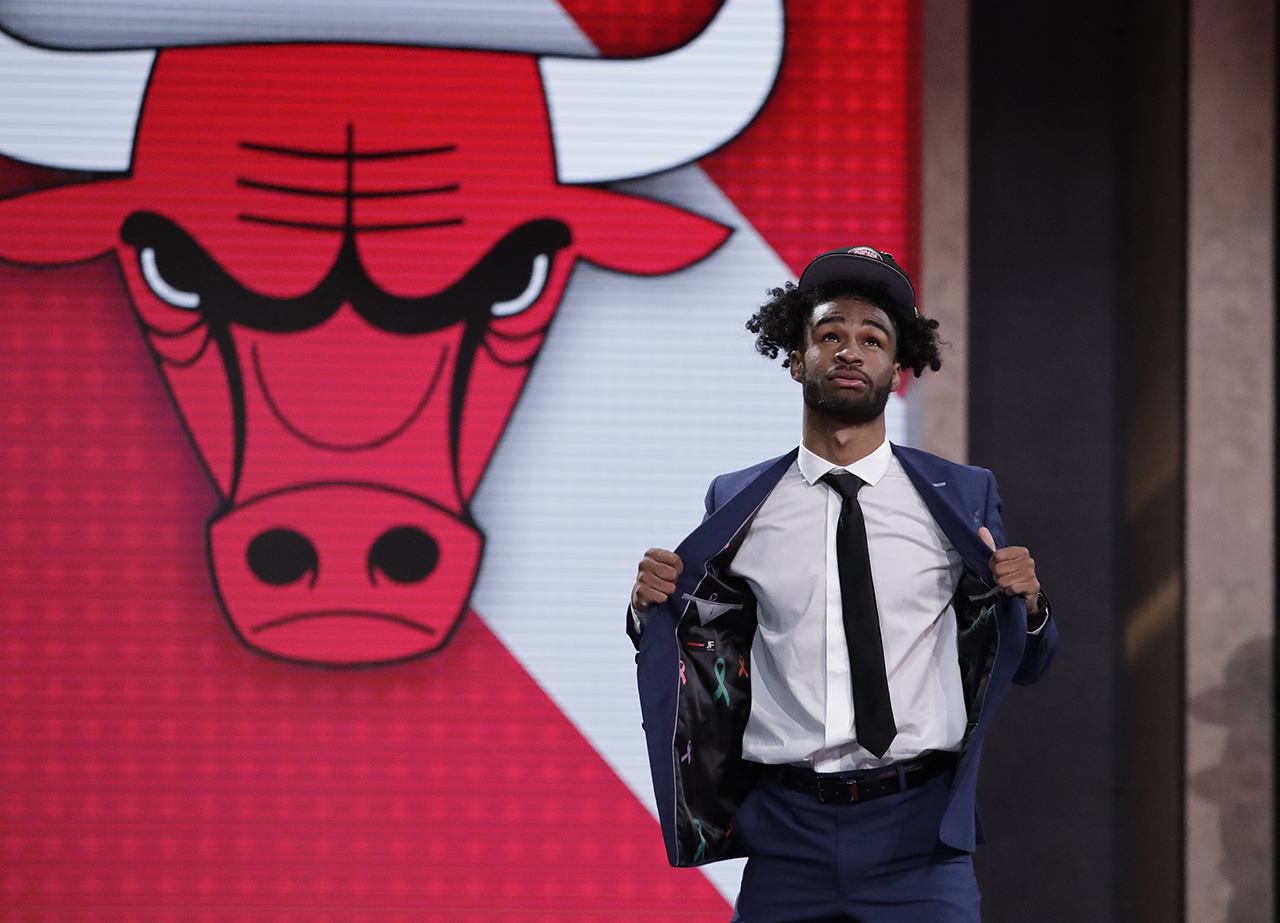 North Carolina's Coby White walks onstage after the Chicago Bulls selected him as the seventh overall in the NBA basketball draft.

The 6-5 guard has the ability to score from anywhere - and in bunches.

STRENGTHS: White was an instate recruit who set a North Carolina prep career scoring record, then steadily developed as the Tar Heels' floor leader to make himself a top-tier NBA prospect. He averaged 16.1 points with the ability to push in transition, score in traffic or separate for a shot against tight defense. He set a UNC freshman record for made 3s while also becoming the first freshman in program history to crack 30 points three times in a season - proof that he can get rolling in a hurry and illustrating why coach Roy Williams called him "the best scoring point guard that I've ever coached."

CONCERNS: White can hit from anywhere but could be a bit more efficient, shooting just 42 percent from the floor and 35 percent from behind the arc. He will need to make more strides defensively and build on improvements made during the course of his freshman season. 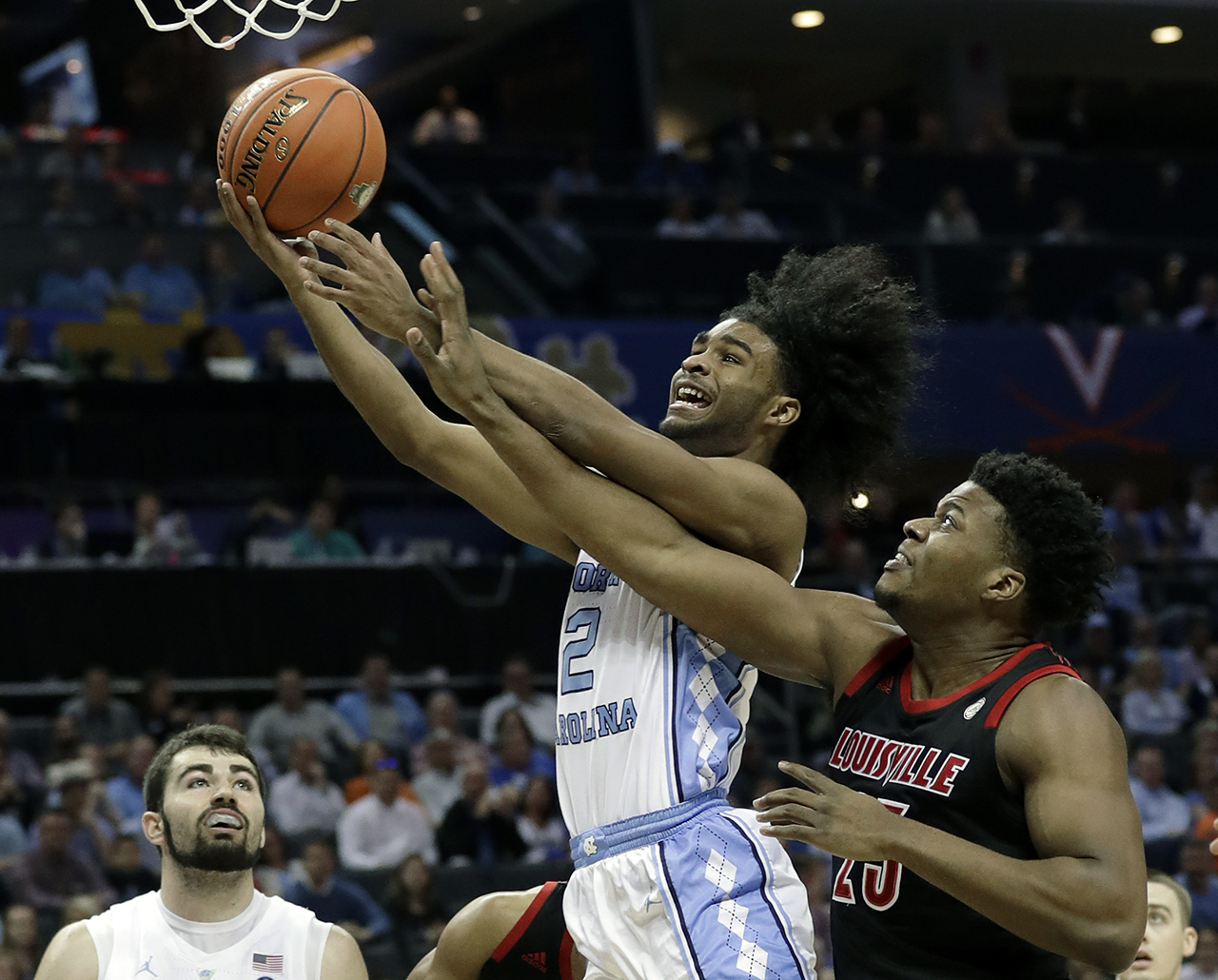 Coby White steadily developed as the Tar Heels' floor leader as the season went on. 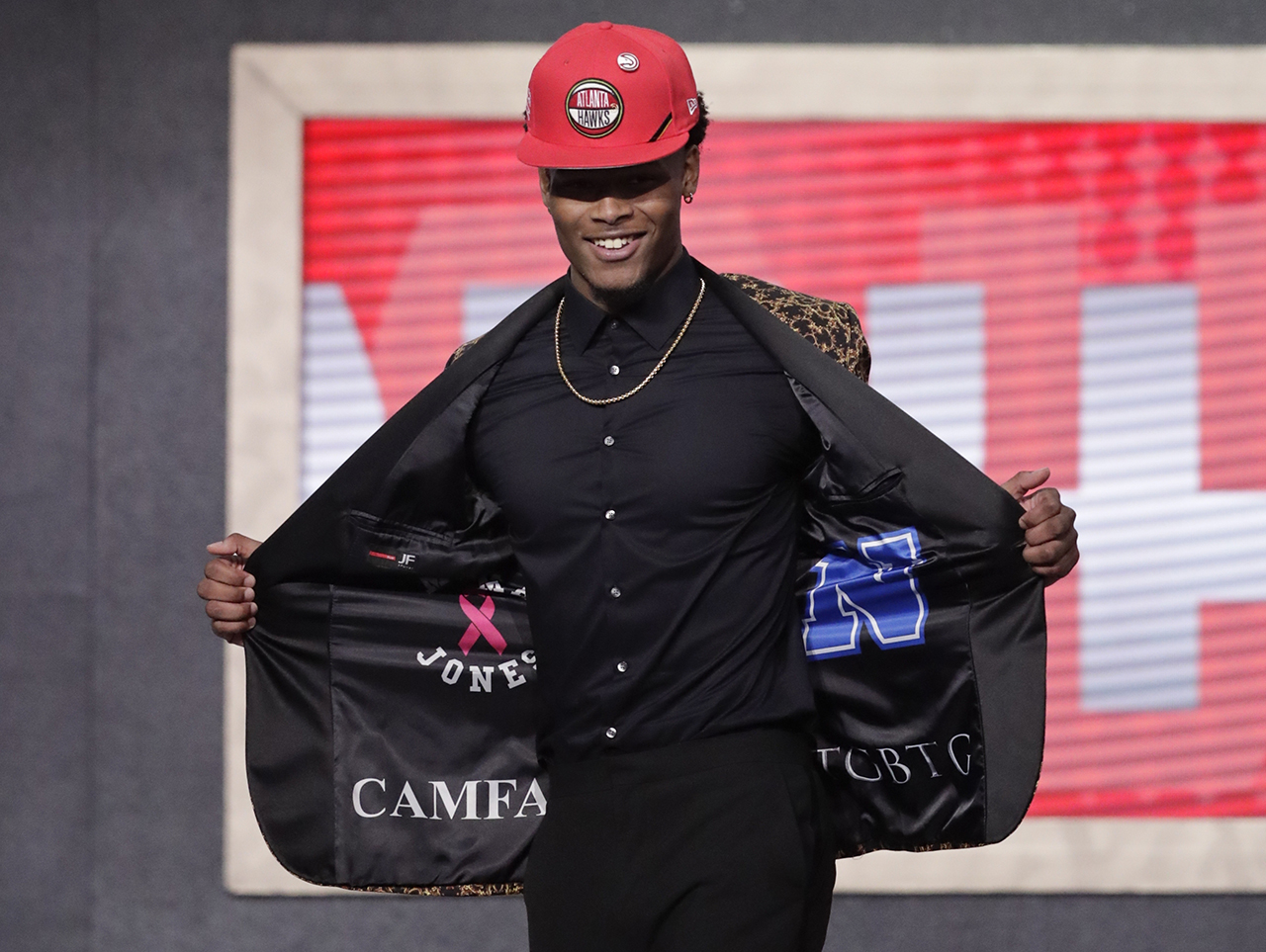 Duke's Cam Reddish shows off his jacket after the Atlanta Hawks selected him as the 10th overall pick in the NBA basketball draft Thursday.

Reddish offers two-way potential, though an uneven freshman year has created some uncertainty about his development.

STRENGTHS: Reddish has size (6-8, 208 pounds) to play shooting guard or small forward. He's a solid athlete with the potential to be a good defender with a 7-foot wingspan. And he's known for his shooting range, illustrated by his 3-pointer with 0.8 seconds left to win at Florida State.

CONCERNS: Reddish arrived as a top-five recruit but it was a bit difficult to evaluate his college transition. He was a third option (13.5 points) as classmate Zion Williamson rocketed to stardom and classmate RJ Barrett became the Atlantic Coast Conference's leading scorer. He didn't shoot the ball as well as his reputation would suggest (35.6 percent overall, 33.3 percent on 3-pointers) and was a surprise late scratch against Virginia Tech in the NCAA tournament's Sweet 16 with a left knee injury. 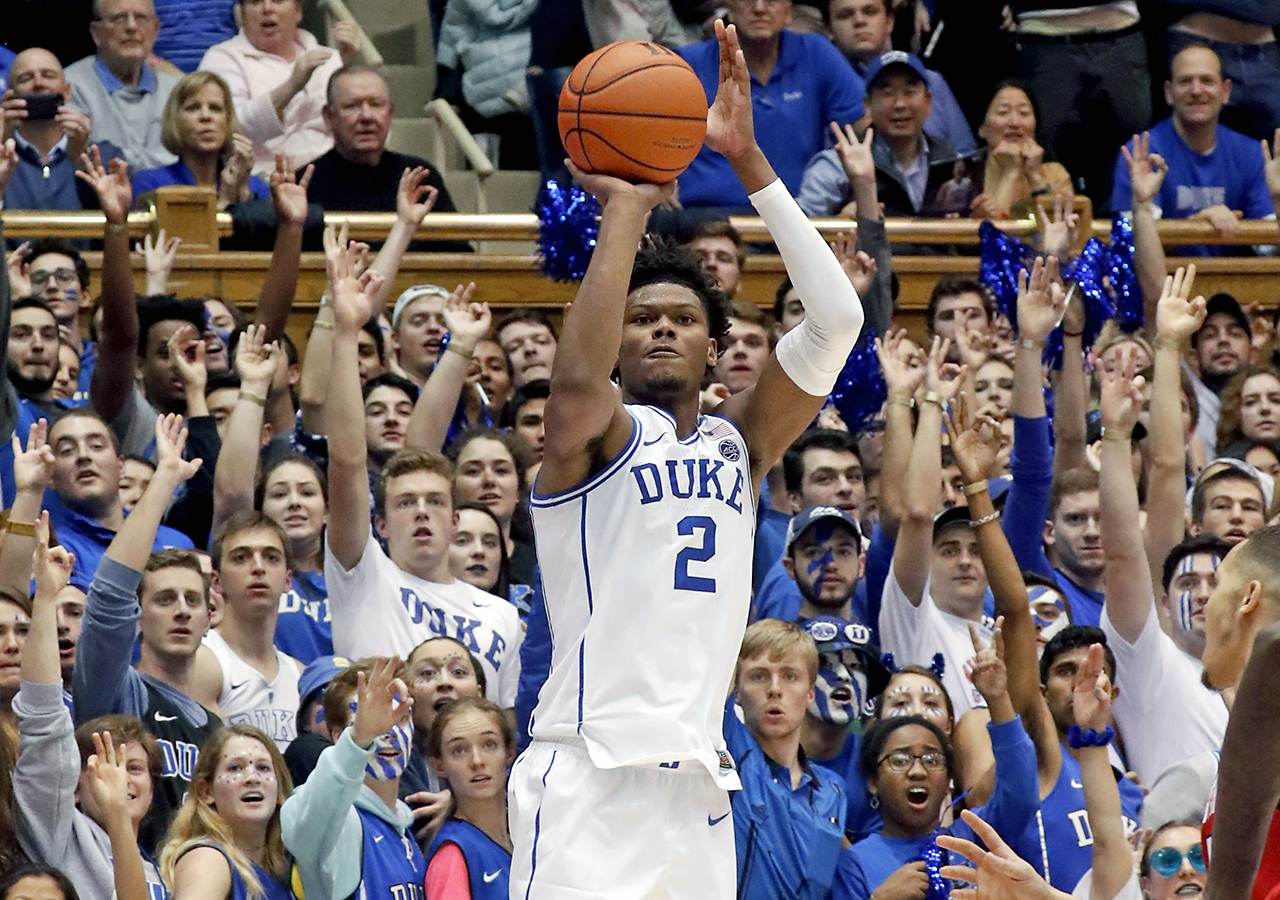 Cam Reddish came to Duke with a reputation as a shooter but struggled at times with inconsistency. 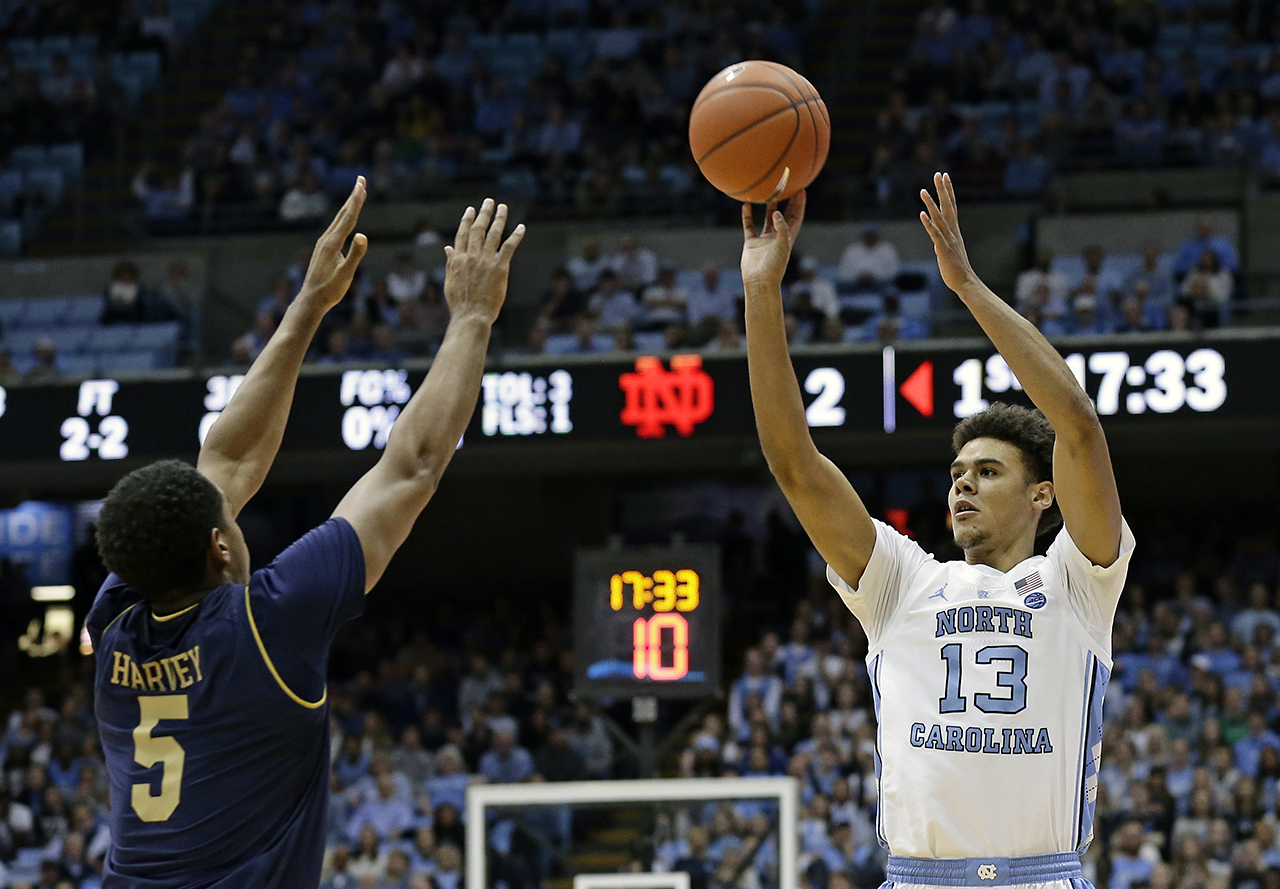 Cam Johnson is a smooth shooter who has improved his game every year.

The 6-8 graduate student is a first-round prospect offering immediate perimeter help with a soft stroke that had him ranked seventh nationally in 3-point percentage (.457).

Johnson wasn't at the NBA Draft, the only one of the six area prospects not present. Some analysts expressed surprise that he was taken an highly as he was, but a mature 6-9 player who improved every year and shot as well as he did will have every opportunity to make an impact at the NBA level. 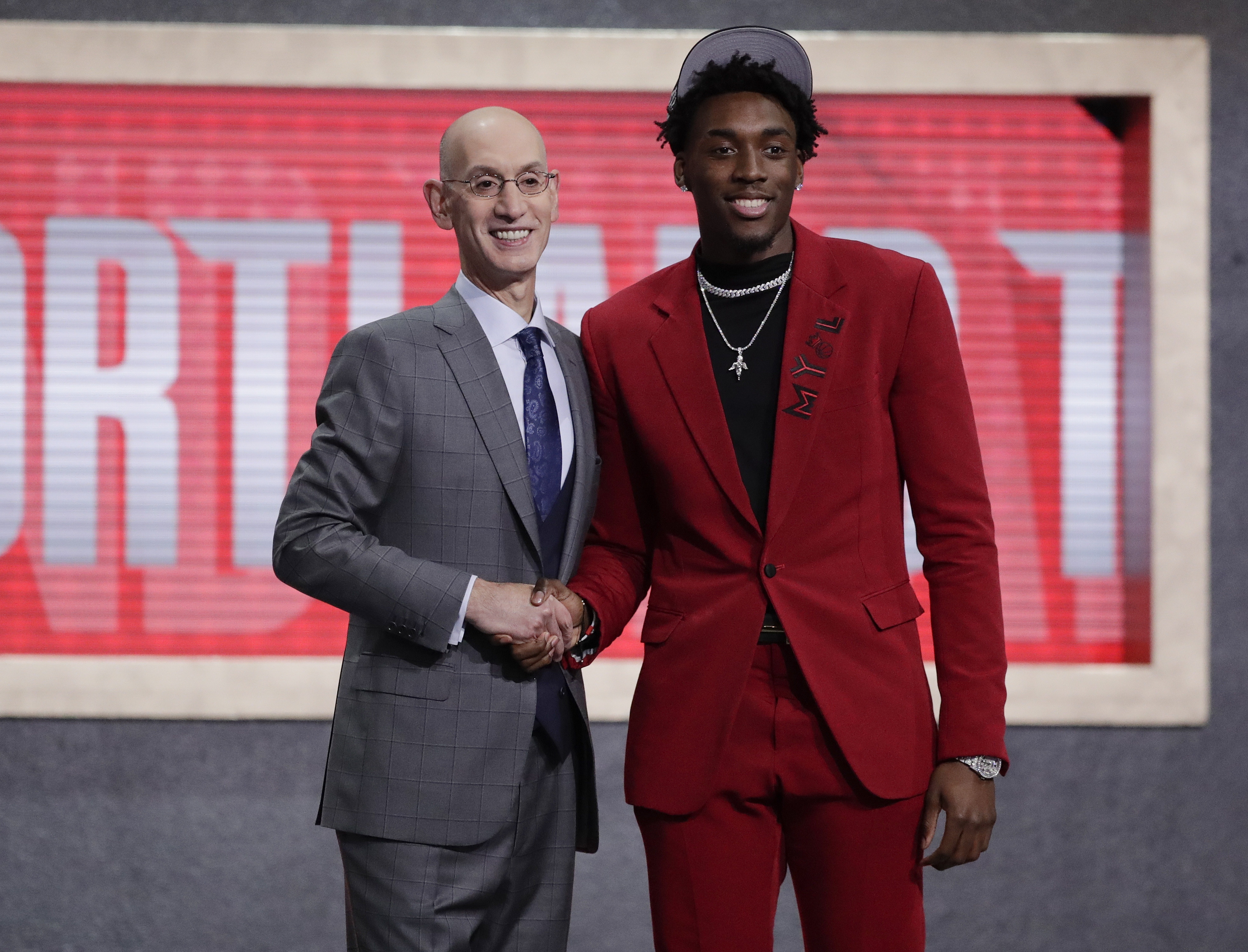 In Little, the Blazers added wing depth to their team with the 6-foot-7 wing. Little was one of the final players left in the Green Room, but he eventually found his way to a playoff team.

Little averaged 9.8 points and 4.6 rebounds in his lone season at North Carolina. 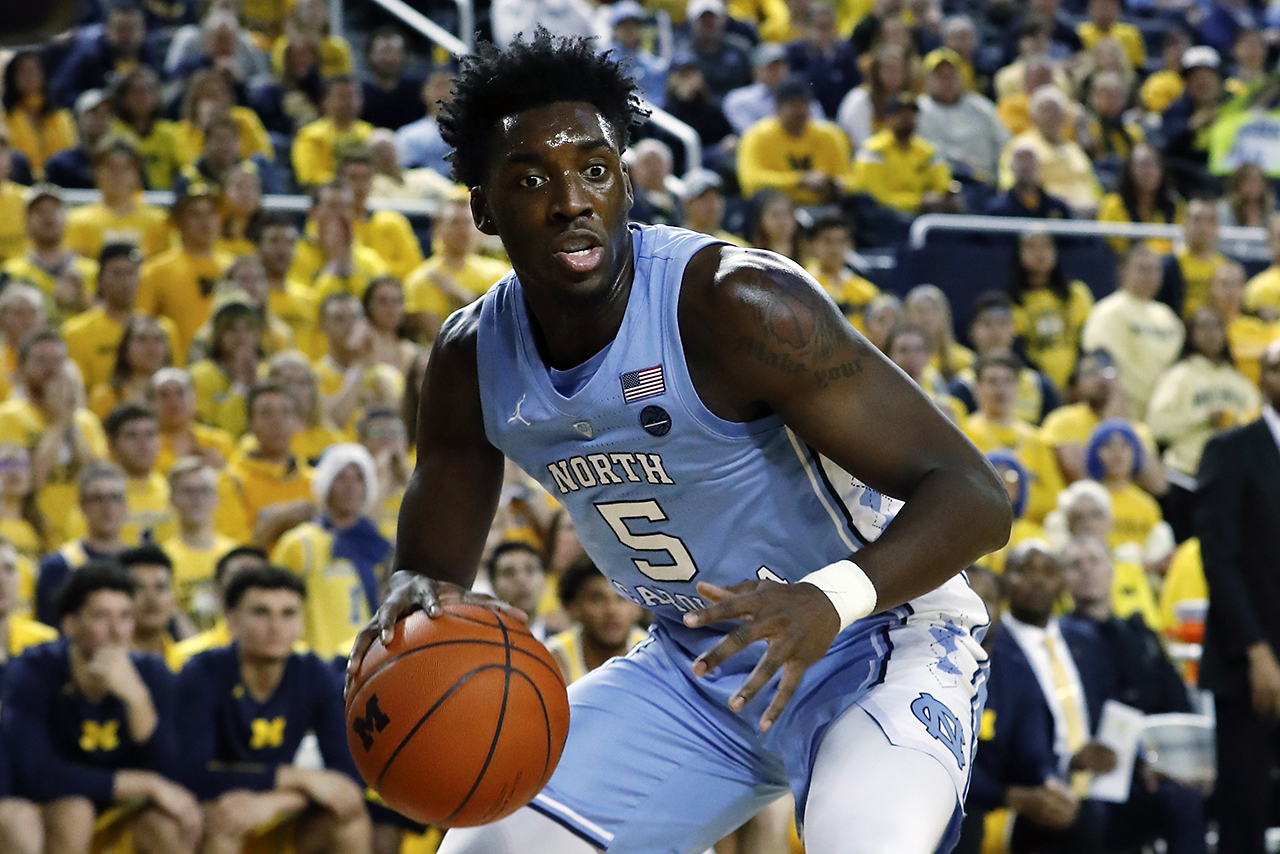 Nassir Little is an intriguing prospect with impressive athleticism who struggled to find his role early in UNC's season.