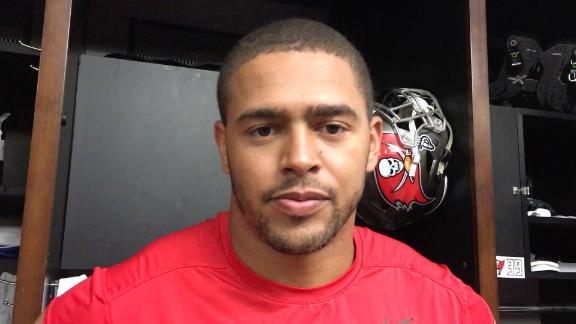 The NFL, in its ongoing quest to expand its worldwide appeal, unveiled the International Player Pathway program over the offseason. Through it, each NFC South team was granted one extra practice squad spot in 2017 for a foreign-born developmental player.

The four players selected have been training with their teams like other practice squad members and were allowed to play in preseason games, but they are not eligible to be activated to the 53-man roster this year.

At the midpoint of the International Player Pathway's first season, we asked the participants to share their experiences in this groundbreaking program.

Jenkins is being treated just like any other rookie defensive lineman in New Orleans.

Specifically, his job is to deliver the food for road-trip flights.

"Yeah, I unfortunately have to get Chipotle for the plane. It is what it is," said Jenkins, who said he had plenty of Chipotle and Mexican food during his four years at the University of the Incarnate Word in San Antonio.

"It's just different when you have to buy 17 bags of [Chipotle]," said Jenkins, who also had to dress up in a Halloween costume this week as part of the rookie treatment and got saddled early on with a corny nickname: "Lord Byron."

But the 24-year-old from Bath, England, isn't complaining one bit about getting the full NFL rookie experience.

And in fact, the 6-foot-6, 270-pound defensive end rather likes getting to spend each day in practice with the scout team, going against the Saints' starting offensive tackles and giving them looks they should expect from opposing defenses on that particular week.

"Maybe some guys are different, but I honestly enjoy it," he said. "It's something I've grown to like, and it's something I know is going to work because I did it in college. I gave looks in college my first year, and the next year I improved exponentially, which I had to.

"I wouldn't be here if I didn't improve exponentially."

Jenkins took up the sport of American football about five years ago, choosing it over boxing and mixed martial arts after his soccer career hit a wall.

Saints defensive end Cameron Jordan said Jenkins doesn't get treated any different than someone like last year's fourth-round draft pick, defensive tackle David Onyemata, who is from Nigeria and didn't learn the sport until he went to college in Canada.

"He's a young kid who's acclimating to the game," said Jordan, who was quick to mention Jenkins' highlight of the summer -- a sack in New Orleans' preseason opener at Cleveland.

"I guess that is the highlight so far. But hopefully there's a lot more to come," said Jenkins, who has quickly learned how intense the mental part of the game is at this level.

Obada's first memory of American football came three years ago when, while watching the BBC at 4 a.m., he saw big men in "shiny helmets" running out of a tunnel onto the field.

It was the entrance that caught his imagination.

It was Obada's size (6-foot-6, 265 pounds) that stirred the imagination of Aden Durde, who was the defensive coordinator for the London Warriors in Britain's top-tier league while serving as a coaching intern with the Dallas Cowboys.

Obada, who was born in Nigeria and moved to London when he was 10 years old, wasn't into any sports, not even soccer. Sports, he said, weren't his thing.

"I wasn't playing anything," Obada said when asked how he was discovered. "I'm a guy. I'm just a normal guy."

Obada, 25, played in five games for the Warriors before joining the Cowboys' practice squad in 2015. He then had brief stints with the Kansas City Chiefs and Atlanta Falcons before settling in at Carolina this year.

"Exposure to the game, the speed, the standard, what's required to play in this game," Obada said of everything he's learned so far.

"If they've never played the game there are certain things you have to get used to that don't come naturally," he said. "He's got a great work ethic. With him it'll probably be another season or two before [he's ready]. But it's very promising, just because of who he is with his work ethic."

Obada would like to think his transition will be quicker than that.

"I wouldn't say a couple of years. That's quite a while," he said. "If I'm smart, if I apply myself and use my time wisely and use this program wisely, I feel like before the end of this season I can be a contender."

For Gray, a converted rugby union player from England, this introduction to American football has been enlightening, to say the least.

"I didn't know quite how much I had to learn coming over here to play this game," he said. "When a lot of people think about football, especially from the UK ... they think it's just a bunch of amazing athletes doing amazing athletic feats. But the mental game that it is, people don't really understand that.

"For me, trying to play tight end and having to know the pass game and the run game and special teams as well, it's been a lot of studying."

Gray, 26, said being an NFL player has been a "7:30 a.m-10 p.m. job." His intense study sessions have to do with not only the playbook, but also learning the NFL rules, in general.

"There's only certain cleats you can wear and gloves, little stuff like that," he said. "I've got a pair of bright orange ones that I have from my rugby days, but I can't wear them. And to know you might get fined money for having your socks pulled down or shirt untucked, that's the stuff I have to learn as well. I don't want to be paying that money."

Gray singled out tight ends Austin Hooper and Levine Toilolo as well as free safety Ricardo Allen for teaching him some of the ins and outs of the game. He also appreciates the time tight ends coach Wade Harman has devoted to him.

Gray has gone through quite an adjustment outside of football, too. He has grown accustomed to rap music, especially Migos, from the daily jam sessions at practice. And Atlanta traffic has taught him a thing or two about patience.

"The drivers over here are terrible," Gray said with a laugh. "People are swerving lanes. I'm genuinely scared to be in the car."

The ultimate goal for Gray, of course, is to earn enough recognition to be considered for a roster spot in the future.

"I'm a long way from where I want to be," he said. "But in this short time, I've made so much progress. I've had a taste of it, playing in the preseason games. And I've been on the sideline of NFL games. I've never been great at watching. It's always like, 'Man, I want to be playing.' It keeps you going."

Nzeocha's first exposure to the NFL was through video games. While he was growing up in Ansbach, Germany, the playoffs and Super Bowl were the only games televised.

"Now they've got like a game or two televised every week. It's growing over there now too," said Nzeocha, 24, who started playing football around 10 years ago, when he and his brothers were approached at a gym by a football coach.

"This guy, where we were working out, he was like talking to me and two of my brothers. He said, 'You guys would probably be great at football,'" Nzeocha recalled. "He was like, 'You guys should try it out.' So we all tried out football, and we all liked playing it."

Up until that point, the only football Nzeocha played was when he'd pretend to be Marshall Faulk and play Madden NFL as the "Greatest Show on Turf" St. Louis Rams.

When Nzeocha was able to catch real NFL games on TV, the two players he was most enamored with were former Baltimore Ravens linebacker Ray Lewis and Buccaneers Hall of Famer Derrick Brooks.

"Ray Lewis is my favorite player of all time," Nzeocha said. "I loved watching him play, just the passion that he played with."

He tried to adopt that same passion when he was playing wide receiver and safety in youth leagues. He eventually followed his brother Mark (who now plays for the San Francisco 49ers) to the University of Wyoming, where he started out at tight end before moving to linebacker.

Nzeocha didn't convert to linebacker until midway through his junior season, so he's still learning the nuances of the position. He likes the strongside position most, although he cross-trains at all three spots. He often watches video of Brooks and has leaned on veteran teammates such as Lavonte David.

Even better than watching video, though? A call from Brooks himself.

"He reached out to me through the program, and we talked on the phone. He's a great guy," Nzeocha said.

He admitted that he was nervous and couldn't chalk up the courage to tell Brooks that he was one of his childhood heroes and is a role model.

"Obviously I was really excited," Nzeocha gushed. "He's like a legend. It was great just talking to him."

The best piece of advice Brooks gave him?