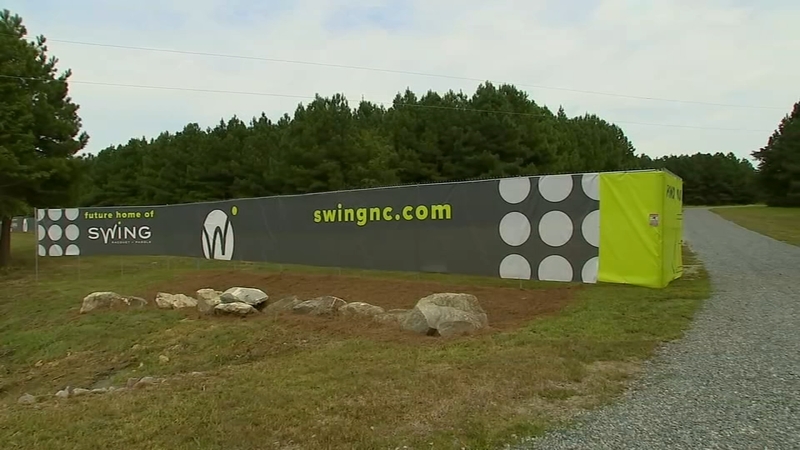 RALEIGH, N.C. (WTVD) -- There's something big brewing out back of Brier Creek. The "Swing" racket and paddle facility won't be completed until 2022 but when it is...

"We're the biggest in the world. This will be the single largest multi-racquet sport complex in the world." developer Rob Autry said Wednesday.

A total of 76 courts in all including all manner of tennis surfaces, pickleball, a new sport called padel, even beach and table tennis and not to "Price is Right" you here, but that's not all.

"Merchandise, physical therapy, strength and conditioning, pickleball, tennis, you know, all your needs, under one roof," Autry explained.

A Garden of Eden for racquet sports that will be built on 45 acres of land that Autry has leased from the city as a partnership for the next 100 years. It's a $55 million project.

"It is important to bring something here that people can come to, it'll have a public park as well," Raleigh Mayor Mary-Ann Baldwin said as she visited the site Wednesday. "I mean, this is going to add a lot of vitality to the area and also put Raleigh further on the map for tennis."

Autry had been searching for the right spot to build for a long time.

"It was one of those 3 a.m. lightbulb moments," Autry said. "I was like, Parks and Recreation, they've got a lot of land, they're all about benefit to the city and I called them and long story short, after three at-bats in front of City Council we got a deal struck."

For Autry, a serial entrepreneur and tennis junkie, it's a dream a long time in the making.

"I've got to give a nod to my wife. She said you've been talking about this since I've met you, since we met 25 years ago," Autry said. "You've got to do this and it's the right time to do this."

Baldwin is happy to bring Raleigh onboard.

"This is a great way to like, re-jumpstart our economic development and bring people to our city," Baldwin said.

There is definitely a strong 'if you build it, they will come' vibe to the place right now, and Autry is certainly banking on that. According to the United States Tennis Association, the Triangle is the fourth most active tennis community in the country, so the chances seem good.
Report a correction or typo
Related topics:
sportsraleighdurhamfitnessgymathletestennisraleigh news
Copyright © 2021 WTVD-TV. All Rights Reserved.
TOP STORIES
Bond denied for teen accused of fatal NC high school shooting
Man stabbed deputy before being shot, killed in Edgecombe County
LATEST: CDC tells states to be ready to vaccinate children
SPONSORED: Big Weather's Big Recipe: Low-cost Steak Sandwich
Nearly 100 rattlesnakes found living under Calif. home
Boy wins mullet contest, and here's what he did with prize money
Show More
COVID-19 blamed in 65% of police deaths since 2020
Teen in Barnard student murder sentenced to 9 years to life in prison
Bill Clinton remains hospitalized, visited by wife Hillary Clinton
Fully vaccinated foreign visitors can start entering US on Nov. 8
More than 100 employees threaten Raleigh over vaccine mandate
More TOP STORIES News