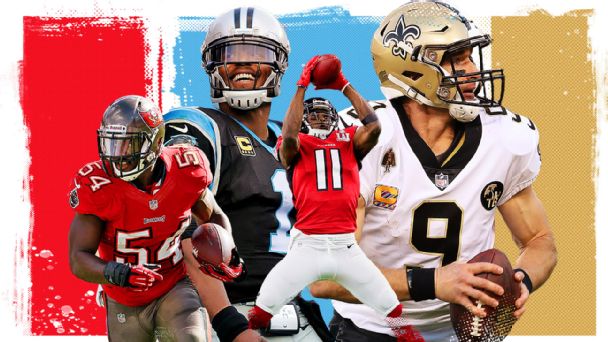 The start of a new decade is upon us with the 2020 NFL season. But before we get rolling with the '20s, ESPN is taking a look back at the best -- and worst -- of the 2010s and naming the top players of the decade for all 32 teams.

From the social media star of the decade to the worst call by a referee, ESPN's NFL team remembers the people and moments of impact -- good and bad -- from the past 10 years. And NFL Nation reporters select the two best players of the decade from their teams, the top coach and assemble all-division teams of the 2010s.


It all kicked off Monday with the best and worst of the NFL from the past decade.

NFC South players of the decade

Jones, the sixth overall pick in the 2011 draft, has been a consistent high-level performer and unstoppable force. Jones, 31, has recorded six straight seasons of at least 80 catches and 1,300 receiving yards. His current career average of 96.2 receiving yards per game is the best such mark in NFL history. The seven-time Pro Bowler has 797 career catches on 1,258 targets for 12,125 receiving yards and 57 touchdowns. Jones has 4,019 career yards after the catch. "He's probably the overall best receiver in the NFL, as far as size and speed and being able to catch the ball and go and getting it vertical," cornerback Joe Haden once said of Jones. The best part of it all is that Jones puts up those numbers despite often drawing added coverage, which opens up opportunities for his teammates to win their one-on-one matchups.

Honorable mention: Matt Ryan, QB, 2008-present. Hard to believe a one-time MVP is an honorable mention. Ryan has passed for more than 4,000 yards in each of the past nine seasons while missing just one game -- last season with an ankle injury -- over that time span. Ryan has completed 64.7% of his passes or better over the past eight seasons. He threw for 93 touchdowns and just 26 interceptions from 2016 to '18. -- Vaughn McClure

Brees began the decade as MVP of Super Bowl XLIV in February 2010. He ended it as the NFL's all-time leader in career passing yards and TDs. Although Brees never got back to the Super Bowl during the 2010s, he did lead the Saints to the playoffs six times. He threw for more than 5,000 yards four times in the decade (no other QB has done that more than once in NFL history). And he broke the NFL record for completion percentage three times. Brees led all NFL QBs with 46,770 passing yards, 345 TD passes and a 69.5 completion percentage in the 2010s. He ranked third with 95 wins as a starting QB, behind Tom Brady (122) and Aaron Rodgers (96).

Honorable mention: Cameron Jordan, DE, 2011-present. I spent much of the decade describing Jordan as one of the NFL's most underrated DEs because he didn't have elite sacks totals, but he was great as a pass-rusher and run defender. Then he got a few more sacks and a lot more recognition, being named first-team All-Pro in 2017 and second-team in 2018 and 2019. Since 2013, Jordan ranks second in the NFL with 78 sacks and third with 30 batted passes.-- Mike Triplett

This was a tough choice between Newton and middle linebacker Luke Kuechly. Both were dominant during the decade at their positions. Newton got the nod because, in addition to his play, the 2015 NFL MVP arguably was one of the league's most iconic players of the past 10 years. From his dual-threat abilities as a quarterback to his fashion to his trendsetting dances to his community service, he elevated himself to a superstar level.

Honorable mention: Luke Kuechly, LB, 2012-19. Were it not for multiple concussions that forced the middle linebacker to miss 10 games from 2015 to '17, the ninth pick of the 2012 draft might still be playing. He has been compared to Brian Urlacher and some of the other great middle linebackers in NFL history. None were more complete during the past decade. -- David Newton

NFC South coach of the decade

Payton's decade began with extreme highs and lows -- a Super Bowl victory in February 2010, the NFL record for yards gained in a season in 2011, then the Bountygate scandal that saw him become the first head coach ever suspended for a full season in 2012. By the end of the decade, however, public opinion seemed to shift in Payton's favor on whether such a harsh penalty was warranted. And Payton solidified his reputation as one of the NFL's great coaches. He oversaw one of the most dynamic passing attacks of all time, with Brees surpassing 5,000 yards four times in the 2010s. Payton also proved he could win with a running game, some defense -- and even a revolutionary Taysom Hill wrinkle -- while winning three straight NFC South titles to end the decade. -- Mike Triplett

Honorable mention: Ron Rivera, Panthers, 2011-19. One easily could argue Rivera should be the South's coach of the decade over Payton. In 2011, he took over a team coming off a 2-14 season and by 2013 won the division with a 12-4 record. He became the first coach to lead a team to three straight NFC South titles (2013-15). His 2015 team had an NFL-best 15-1 regular-season record and reached the Super Bowl. He was a two-time NFL Coach of the Year. Were it not for injuries to quarterback Cam Newton that led to losing seasons in 2018 and 2019 and a change in ownership, Rivera might still be Carolina's coach. -- David Newton 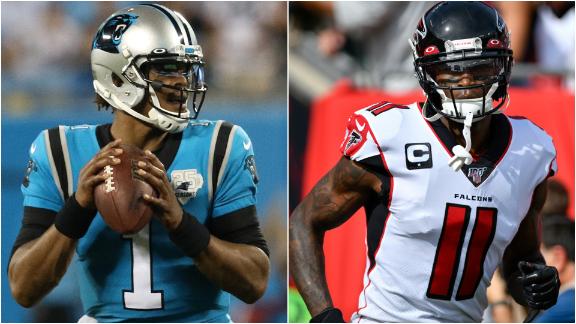