NFL says it was denied video 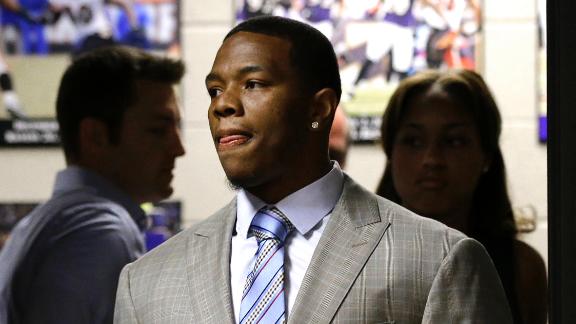 ESPN
The NFL repeated Tuesday that authorities did not make available the video of Ray Rice assaulting his future wife in a hotel elevator at an Atlantic City casino last winter.

TMZ Sports obtained the video and posted it on its website Monday. It showed Rice delivering two punches to Janay Rice, the second knocking her down and seemingly leaving her unconscious. Later in the day, the Ravens released Rice and the NFL followed by placing him on indefinite suspension.

Sources connected with the Revel Hotel and Casino told TMZ that no one from the NFL asked the since-closed casino for the video of the couple in the elevator from the Feb. 15 incident. Instead, the league apparently relied on previously released video that showed Rice dragging his then-fiancee from the elevator before determining that Rice would serve a two-game suspension.

"We requested from law enforcement any and all information about the incident, including any video that may exist," the NFL said in a statement. "We spoke to members of the New Jersey State Police and reached out multiple times to the Atlantic City Police Department and the Atlantic County prosecutor's office. That video was not made available to us and no one in our office saw it until yesterday."

A Revel spokesman told ABC News that the casino did make a copy of the elevator surveillance video for police.

In an earlier statement Tuesday, the NFL said its understanding was that security at Atlantic City casinos is handled by the state police. In response to inquiries from ABC News, the state police said the statement from the league is not accurate.

"Investigations of incidents on the casino floor are handled by the NJSP, but this occurred in the elevator and was handled by the [Atlantic City Police Department]," an NJSP spokesman said. "We never had the video."

The NFL then issued a statement saying it also had reached out to the Atlantic City police and the prosecutor's office.

A spokesman for the New Jersey state attorney general responded to questions about why the video was not released to the NFL.

"It's grand jury material. It would have been improper -- in fact, illegal -- for the Atlantic County Prosecutor's Office to provide it to an outside/private/non law-enforcement entity," Paul Loriquet said, according to ABC News.

"No one knows the pain that the media & unwanted [opinions] from the public has caused my family," she wrote. "To make us relive a moment in our lives that we regret everyday is a horrible thing."

The Ravens said that they'd not seen the video released by TMZ Sports before Monday, either. Asked why the team wasn't able to view it sooner, coach John Harbaugh told reporters at a Monday night news conference: "I don't know why that would be a hard thing to understand. It wasn't available. It wasn't there for us. It wasn't something that we ever saw or had access to."

The Associated Press reported Monday night that it had viewed a higher-quality video provided by a law enforcement official, and that the couple could be heard shouting obscenities at each other. According to the AP, after she collapses, Rice drags her out of the elevator and is met by some hotel staff. One of them can be heard saying, "She's drunk, right?" And then, "No cops." Rice doesn't respond.

The video, which is slightly longer than the TMZ version and includes some audio, was shown to the AP on condition of anonymity because the official isn't authorized to release it.

The Ravens reached their decision to release Rice in a quick meeting between Harbaugh, owner Steve Bisciotti, general manager Ozzie Newsome and team president Dick Cass, according to Harbaugh.

Rice was initially suspended for two games by NFL commissioner Roger Goodell. The suspension was criticized as too lenient, and Goodell himself, in issuing a revised policy with greater consequences for domestic violence and other forms of assault, acknowledged that he "didn't get it right."