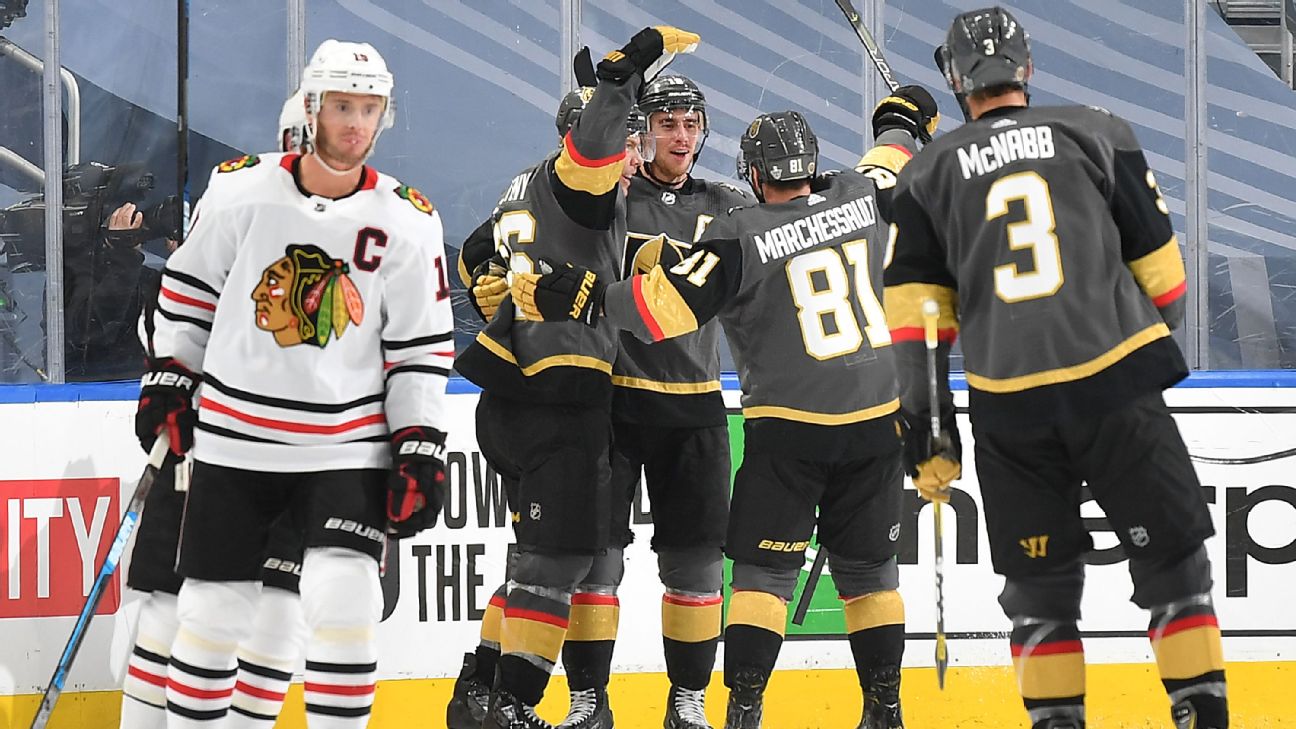 Wednesday didn't bring us any five-overtime games. But it did bring us brunch hockey, double overtime, two unreal saves, a $25,000 fine and a lot of heat in postgame Zoom calls.

On Tuesday, these teams played six hours and five overtimes, and they combined for 151 shots on goal. And on Thursday, they go back at it again. I'm very curious about the fatigue factor. Both teams are warriors, but NormaTec and ice baths can take you only so far. Send extra thoughts to Joonas Korpisalo (85 saves) and Seth Jones (who skated an NHL-playoff-record 65 minutes and six seconds). Dating back to the Maple Leafs series, the Blue Jackets have played four games, including three that went to overtime, in the span of six days. As you might have imagined, both the Lightning and Blue Jackets had off on Wednesday (Columbus gathered for a team stretch and an afternoon meeting but otherwise was told just to take it easy).

In Robin Lehner's first game against the team that moved him at the trade deadline, he came out on top. The goalie is going to need to fix his skate issues for Game 2, but otherwise, it's hard to make a case for Peter DeBoer not to start Lehner again in Game 3. After all, his familiarity with the Blackhawks may put him at an advantage. "That's the type of goalie I am," Lehner has said. "I think I'm foremost a reading goalie. I know a lot of their tendencies. I know what they're trying to do on the power play, etc." As for the Blackhawks? "I don't think we're satisfied, by any means, with the way the play went," captain Jonathan Toews said Wednesday. "We all know there's a lot more we can bring to the table."

Brad Marchand couldn't help himself. He kept calling the round-robin games the "preseason" or "exhibitions." The Bruins insisted they could flip a switch when the playoffs actually began, and maybe we should have taken their word for it. Carolina had strong moments in Game 1 and proved it won't be an easy out. Canes coach Rod Brind'Amour was furious with the way the officials handled a challenged goal in Game 1 (more on that below) and was immediately fined $25,000-- and put on notice, with a conditional $25,000 fine for future behavior. If Brind'Amour is fired up, you can bet he's getting his guys fired up too.

Here's a troubling trend for the Stars: They've allowed the first goal in nine consecutive games, dating back to the regular season. They also have only one win in that span. Dallas needs to up the intensity for Game 2 and, as always, score more goals. It sounds like Ben Bishop (unfit to play, did not start Game 1) could be good to go after practicing with the team Tuesday. While Anton Khudobin is a highly capable option, the Stars are better off if Bishop is in net. Also keep an eye on the status of defenseman Stephen Johns, who left Game 1 in the second period. Calgary feels confident. The Flames played physical and fast, and goaltending is holding up. They have allowed just eight goals through five games this summer.


These teams were supposed to play Tuesday night but -- as with most things in 2020 -- had to adapt, in this case because of that five-OT game. So we got brunch hockey. And naturally, it went to overtime (though it didn't totally disrupt the day's schedule). The Canes welcomed Dougie Hamilton back to the lineup but were surprisingly without Sami Vatanen and Justin Williams (both unfit to play). Canes goalie Petr Mrazek was fantastic, until the final goal. Bruce Cassidy had his top line going against the Canes' top line, which is a treat to watch. Speaking of "The Perfection Line," it might have gotten rid of the rust. Patrice Bergeron's overtime winner felt like vintage Patrice Bergeron. Maybe the round-robin really didn't matter after all. Full recap.

The Caps jumped to a 2-0 lead, thanks to a pair of goals from T.J. Oshie. Then the Isles scored four straight goals to win this in regulation (regulation wins are apparently a prized commodity in the Toronto bubble). Two of the goals were ones that Braden Holtby, as the announcers like to say, "would have liked back." The story here might be Anders Lee, New York's captain who was an assist away from a Gordie Howe hat trick. The fight -- with who else, Tom Wilson -- came after Lee hit Nicklas Backstrom, which knocked the center out of the game. Caps coach Todd Reirden called the hit "late" and "predatory." John Carlson said "it looked real dirty to me." This series is just heating up. Full recap.

If not for Joonas Korpisalo, we'd be talking about Darcy Kuemper as the breakout goaltending star of this tournament. Kuemper was sensational through two-plus periods, stopping a steady attack from the Avalanche while not allowing any second-chance rebounds. Nazem Kadri finally broke through in the third, and within a one-minute, 23-second span, the Avs had a 3-0 lead as J.T. Compher and Mikko Rantanen also scored. Kadri has been such a great fit for Colorado and a beast this summer. On a night Nathan MacKinnon had zero shots on goal, Kadri had seven. The shots ended up 40-14 in Colorado's favor, leading Arizona coach Rick Tocchet to rip his team in the postgame Zoom conference. "I'm just disappointed in this club because this is a big opportunity and we had a terrible practice yesterday," Tocchet said. "I really don't want to get into it anymore. The players know how I feel. You guys saw it. Darcy Kuemper kept us in it and that's basically it." Full recap.

This series was billed as a goalie duel --- featuring Carter Hart, who grew up idolizing Carey Price -- and Game 1 did not disappoint. Hart, who turns 22 today, stopped 27 of 28 shots to get the win, although Price did dazzle with an insane save using his stick blade. The Canadiens didn't look out of place in this game; in fact, if one or two lucky bounces went their way, they could have won. This should be a fun -- albeit tight, defensive -- series. Shea Weber's power-play goal was huge, considering how dreadful Montreal's power play has been. Philadelphia feels good about Joel Farabee, the rookie who has now scored in back-to-back games in a top-line role. "It's his first playoff, but it doesn't look like it," defenseman Ivan Provorov said. "He has poise, he's been making plays. He's been scoring and helping us big time. He deserves to be on that line." Full recap.

The Canucks scored three power-play goals, and their young offense continues to impress. Captain Bo Horvat scored two goals, while Brock Boeser also stayed hot. And then there's Quinn Hughes, who has seven points through his first five postseason games -- the most by a rookie defenseman since Ray Bourque in 1980. It's going to be fun watching these two teams clash in what's likely the tightest series in the West. Vancouver plays more of a speed and skill game, while the Blue work the cycle. St. Louis needs to find a way to dig into its best playoff mode. The Blues have now been outscored 8-0 in the third period during the tournament. Full recap.

While Bo Horvat had the more productive night, scoring two goals for Vancouver, I have to highlight Stecher, who scored the game-winner in the third. Stecher dedicated his first career playoff goal to his father, Peter, who died in June.

The center's line was being criticized for going scoreless in the round-robin, and then he comes up big, scoring the game-winning goal in double overtime. "We've got a lot of trust in those guys," coach Bruce Cassidy said of his star top line.

His team lost, but Oshie played a great game, scoring two goals and making this unreal defensive stop when Braden Holtby got tangled up out of position.

Save of the day

You see why nobody wanted to face Carey Price in this tournament. Also, he probably saved Nick Suzuki a trip to the dentist -- or maybe worse.

"I just kind of tucked my head," Suzuki said. "I was hoping it was going to hit me and block a shot, but Carey did an unbelievable job there saving that and saved my head, for sure."

Avalanche defenseman Nikita Zadorov continues to stand out in the Edmonton bubble. He also clearly has an affinity for white pants. Curious if he brought a second set of looks for post-Labor Day.

"This is why the league's a joke, in my opinion, on these things. That one is a crime scene." -- Hurricanes coach Brind'Amour to The News & Observer, upset that officials wouldn't clarify the call on the ice, leaving the coach to guess on what to challenge. (He guessed wrong.) The league fined Brind'Amour $25,000 for the comments -- and issued another conditional $25,000 fine "in the event of similar inappropriate behavior through Aug. 12, 2021." 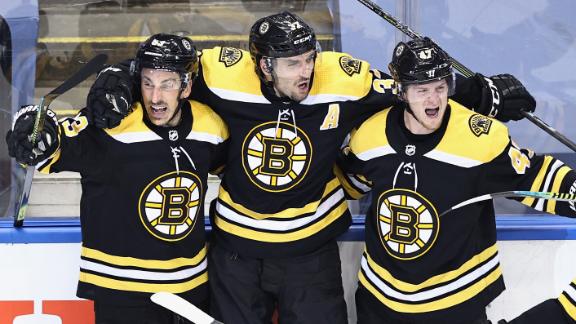 Bergeron fires puck into the back of the net in 2OT
David Pastrnak makes a backhand pass to Patrice Bergeron, who snaps home a wrister to give the Bruins a 4-3 double overtime win in Game 1. 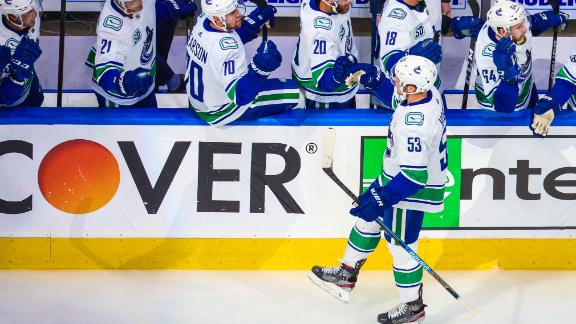 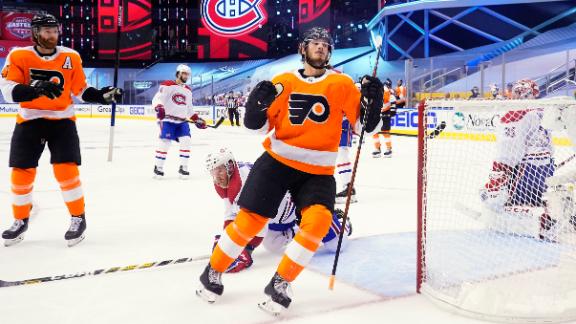 Farabee's tiebreaking goal lifts Flyers past Canadiens
Joel Farabee breaks the tie in the second period as the Flyers go on to defeat the Canadiens 2-1. 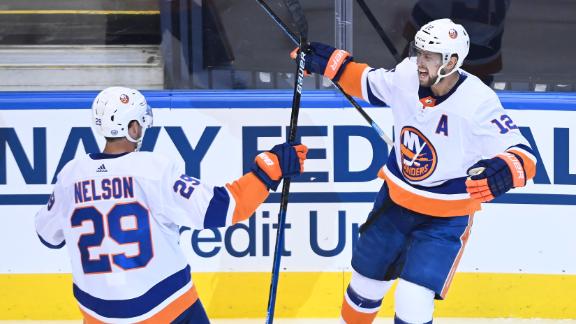 Bailey nets shorthanded goal vs. Caps
Josh Bailey gives the Islanders the lead with a third-period goal as they beat the Capitals 4-2. 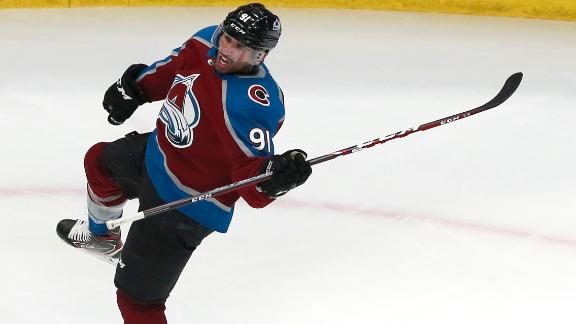