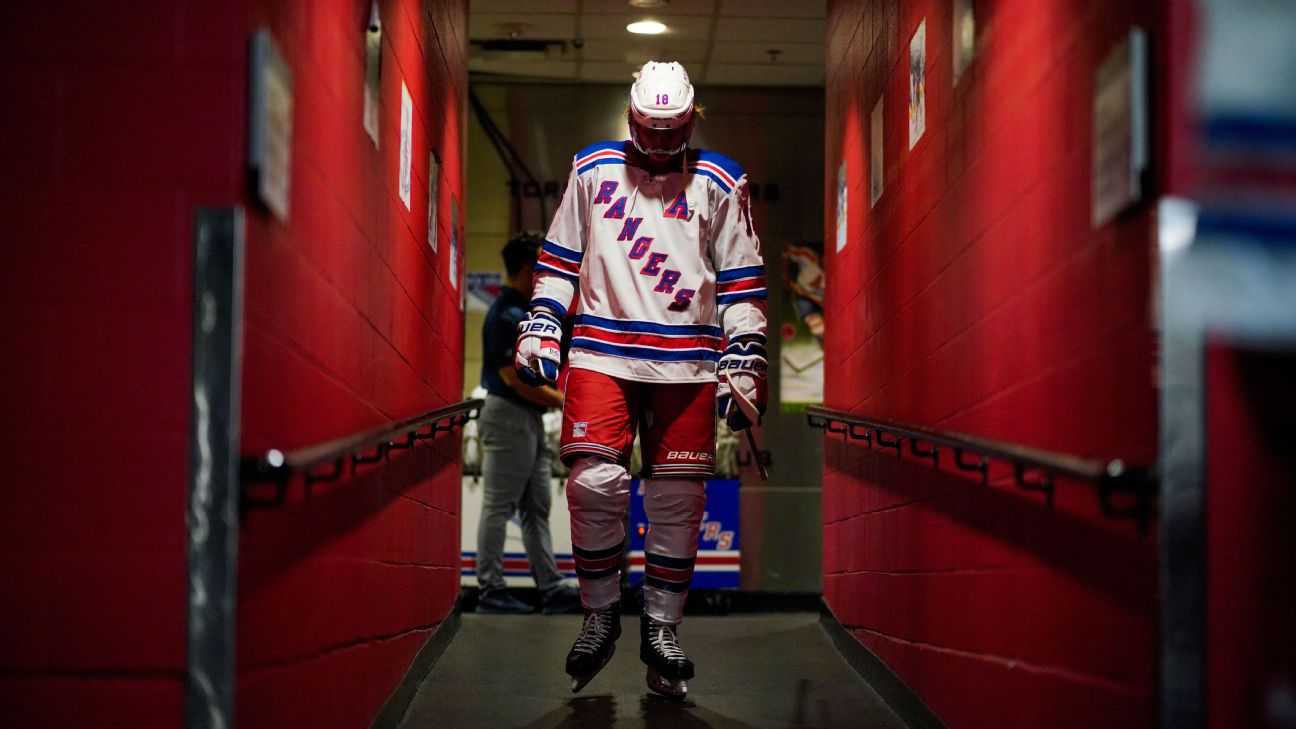 The New York Rangers face elimination on Tuesday, and others could be in the same spot after today's slate of games.

Keep this in mind: Teams with a 2-0 lead are 55-1 (98.2 percent) in winning a best-of-five series, which the league had held most recently from 1980 to '86. The Florida Panthers, Nashville Predators, Toronto Maple Leafs and Vancouver Canucks are all trying to avoid that dreaded deficit.

Sergei Bobrovsky inspired some hope in Game 1 with a 26-save performance, but the Panthers are toast in this series if they can't generate any offense outside of Jonathan Huberdeau and Aleksander Barkov.

Predators coach John Hynes remained coy about his starting goaltender after Juuse Saros lost Game 1 to Arizona, despite making 33 saves. But the goalie might not matter for Nashville: If the Preds don't spot the Coyotes a lead, and do play as ferociously as they did in the final 40 minutes of Game 1, this series will be evened up ... before they go right back at it on Wednesday.

The concerns of every Leafs fan about this matchup came to fruition in Game 1: Their best players were held in check, the Jackets played a disciplined game in not giving them an inch, and the opposing goalie (Joonas Korpisalo) put on a clinic. "I don't think anyone in our room's panicking or getting nervy or anything," said Mitch Marner of the Leafs. "We know we have a lot better to bring out and show."

The status of injured Jets forwards Mark Scheifele and Patrik Laine will be the story heading into this one, as Winnipeg tries to ride the momentum from their gutsy Game 2 win just 28 hours earlier.

Carolina goes for the qualification round sweep over the Rangers. Goalie Henrik Lundqvist has now given up seven goals in the series, and coach David Quinn was noncommittal about his starter for this game. The Hurricanes have dominated at 5-on-5, as New York is getting just 44.16% of the shot attempts in the series.

Watch out for the Wild. They played a brilliant defensive game against the Canucks in Game 1, pushed them around and didn't get rattled. "There was an edge. I think that's exciting for people to watch. I know it's exciting to coach. And I'm sure it's extremely exciting to play," said coach Dean Evason.

Question of the day: Will the skill players continue to get stifled?

The Maple Leafs and Canucks boast some of the NHL's most brilliant young offensive talents in players like Auston Matthews, Mitch Marner, William Nylander, Elias Pettersson, Bo Horvat and Brock Boeser. All of them were shut down in their first games of this postseason, as Toronto was shut out by Columbus and Vancouver was blanked by Minnesota. What they learned in Game 1, and how they react in Game 2, could determine these series.

"I think we probably had a few guys that were a little bit nervous, which is to be expected," said Vancouver coach Travis Green. "I don't think we had quite everyone playing their best. Our team has always done a good job learning from games where we played well or OK, to play better the next game. I expect our team to be better next time."

Said Leafs coach Sheldon Keefe: "We have to find different ways to score, and that's an adjustment. We need those guys to be playing at their best, especially now coming off a loss. We need to respond in a big way."

Hurricanes vs. Rangers under 5.5 goals (-115). So far in the postseason, 12 of 16 games have hit the under. If we narrow that to just the qualification-round games, and it's 9 of 12. The trend will continue -- it's just a matter of picking the right game to hit the number. The Hurricanes and Rangers have totaled five goals in both of their previous games. With New York playing for its playoff life, we expect an even tighter game on the second of back-to-back days.

The Hurricanes moved within one win of eliminating the Rangers thanks to a hat trick from Andrei Svechnikov, the first of his NHL career, along with three assists from Sebastian Aho and a strong 23-save performance from Petr Mrazek. Artemi Panarin scored for the Rangers, but that was it for New York. Full recap.

Missing injured forwards Mark Scheifele, Patrik Laine and Mason Appleton, the Jets pulled out an impressive win to even their series. Nikolaj Ehlers scored his first postseason goal to break a 2-2 tie in the third period. "Our season was on the line, so I guess that makes it special. It's one win, in a long journey. I don't know how many wins we had this year, but a good majority of them were like that, where there was some adversity. Things we had to overcome, from guys getting hurt, guys quitting, whatever that might be. We made the joke yesterday that things are finally back to normal, so let's get to work," said captain Blake Wheeler, making a less-than-veiled reference to former teammate Dustin Byfuglien in the process. Full recap.

Tampa Bay won a shootout against Washington in the first round-robin game for both. Coach Jon Cooper wasn't thrilled with the Lightning blowing a two-goal lead, but was happy with the character they showed in pulling out the victory. "You've got to look the other team in the eye, and in previous years we haven't done that as well as we should have," he said. Nikita Kucherov had a goal in regulation and in the shootout. Full recap.

Dallas held a 3-1 lead over the Knights entering the third period, and then Vegas decided to go all-in on the offense. Mark Stone, Nate Schmidt, William Carrier and William Karlsson scored in a four-goal rally for a round-robin victory in the first postseason game for both teams. Robin Lehner made 24 saves. Miro Heiskanen had three assists in the loss. Carrier's goal was one of the prettiest of the day (that maybe shouldn't have counted because of goalie interference, but the refs ruled it a good goal). Full recap.

Sidney Crosby opened the scoring and Jason Zucker scored a key third-period goal as Pittsburgh overcame another great Carey Price performance to even their series against Montreal. Matt Murray made 27 saves in the win. Full recap.


Connor McDavid scored twice in the first 4:05 of the game en route to his first postseason hat trick, as Edmonton evened its series with Chicago. Ryan Nugent-Hopkins had three assists and, perhaps most importantly, Mikko Koskinen made 23 saves in his first postseason start for the win. Full recap.

The Oilers star's hat trick powered them to a victory in Game 2, but it was his second goal that belongs in a museum. Witness the puck-juggling acceleration of the best offensive player in the world.

To break down the winger's hat trick, we turn the mic over to Carolina forward Jordan Martinook: "He's built like an ox and he can skate and shoot and does everything fast, and thinks the game well. And I'm pumping his tires pretty good right now, but I've got nothing, he's special. So yeah, it's fun to watch him, and it's going to be a lot of fun to watch him for the next couple months here."

Game 2 proved that Price can't do it alone, although he's certainly trying. He has made 74 saves on 78 shots in the first two games. "He obviously made some huge saves that kept us in the game for the most part," Canadiens defenseman Brett Kulak said after Price's 35 saves in Game 2.

"I found the hats a little unnecessary. I'd rather drop the puck and keep on going." -- Connor McDavid, discussing the hats thrown on the ice to celebrate his hat trick. As part of their attempt for normalcy, the NHL had a staffer run down and toss Oilers hats on the rink after his third goal. McDavid was unmoved.

The Florida Panthers are offering some cool glimpses at bubble life, including this spikeball battle inside the team hotel.

Two days after Matt Dumba of the Minnesota Wild became the first NHL player to take a knee during the U.S. national anthem, two members of the Dallas Stars and two members of the Vegas Golden Knights did the same before their game.

Vegas forward Ryan Reaves, one of the NHL's few Black players, and goaltender Robin Lehner knelt with Dallas forwards Tyler Seguin and Jason Dickinson before their round-robin postseason game in Edmonton, Alberta. The two Vegas players flanked the two Stars players as they took a knee on the blue line.

Reaves and Lehner had decided before the game to take a knee, and then Reaves invited Seguin to join them during the pregame skate. Seguin told the Stars locker room his intentions, and Dickinson was the only teammate who offered to join him.

Seguin said Dumba's protest was a part of his inspiration, as was the fact that no other player joined Dumba in taking a knee on Saturday or raising a fist before Sunday's game for the Wild.

"There was some influence. Nothing against his teammates. Everyone makes their own choices. I don't think that means anyone doesn't support him. But being two white guys, to do what we did ... I wanted to be a part of that movement," Seguin said. "I can't honestly say I was going to go out there on my own and take a knee. But with them having a Black player on the team and his beliefs, I've said from day one I was going to support that any way that I can." 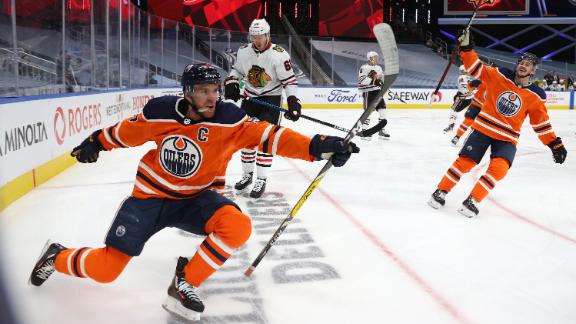 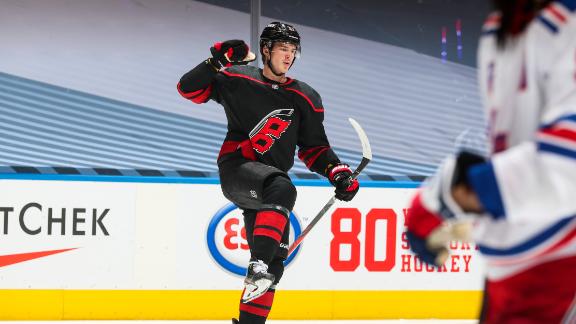 Svechnikov nets hat trick as Canes grab 2-0 series lead
Andrei Svechnikov scored three times against Henrik Lundqvist and the Rangers to give the Hurricanes a 2-0 series lead in the East qualifiers. 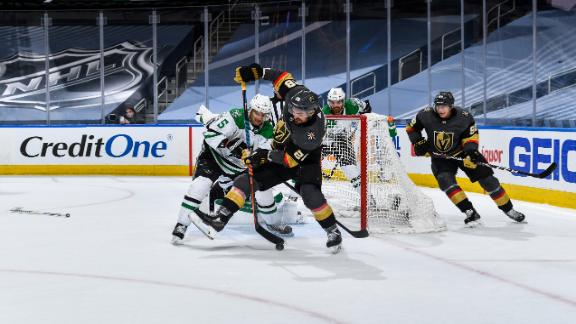