Friday featured the completion of three series upsets and a stunning late-game rally by the Toronto Maple Leafs against the Columbus Blue Jackets that pushed their series to a fifth and final game. On Saturday, we'll find out who the Montreal Canadiens and Chicago Blackhawks will face after their qualification round stunners, derailing the Pittsburgh Penguins and Edmonton Oilers, respectively, in the No. 5 vs. No. 12 matchups.

The winner of this game also wins the No. 1 seed in the Western Conference and a first-round date with the Chicago Blackhawks. The Knights and Avs enter the game having both gone 2-0-0 thus far. "The higher the seed, the easier path you get. That's the reality," said Vegas coach Pete DeBoer. "You get the lowest-ranked opponent, last change, sometimes you get the benefit of a home dressing room over the visitors' dressing room. Our group thinks it's important, and we've prepared that way."

The No. 1 seed in the Eastern Conference is on the line here, as the Lightning (2-0-0) and Flyers (2-0-0) battle for the chance to take on the Montreal Canadiens in the next round. For the Flyers, a win would mean they will have essentially jumped 11 points in the standings, aka the distance between themselves and the top-seeded Boston Bruins when the regular season was paused.

Question of the day: When will we see Steven Stamkos?

Lightning coach Jon Cooper was asked about injured star Steven Stamkos, who hasn't played in the exhibition or round-robin games.

"I'll save us any more questions about Stammer. He's not going to be available [on Saturday]," Cooper said. "Injuries are unpredictable. If there's somebody that is working harder than him in trying to get back, I've not seen it. He's rehabbing. Our staff has been working with him on a daily basis. In situations like this, you never know. To put all this to bed: Don't ask any more questions about Stamkos. When he's ready to come back, I'll be the first to tell you. But there's no use in speculating anymore. As of right now, he's out indefinitely, until he's not."

Flyers vs. Lightning, under 6 (-118, via DraftKings). I've shied away from wagering on the round-robin games because it's been difficult to tell how teams are approaching these games. The Lightning are approaching this game as prep for the next round. Does that mean they won't play to win? No. But there's also a better chance they'll try to manage their structure and refine their system, which has me thinking this game won't be a track meet. All four round-robin games in the East and two of the four in the West have been under six.


Anthony Beauvillier scored two goals and Semyon Varlamov made 24 saves for New York as the Panthers were sent packing in Game 4. Sergei Bobrovsky made 33 saves for the Panthers but made a misplay on the Islanders' first goal from a sharp angle from Beauvillier. "At the end of the day it's not about saves, it's all about wins. Today on the first goal, I let guys down. I could do a better job on the first goal," Bobrovsky said. Full recap.

Brad Richardson's goal at 5:27 of overtime gave the Coyotes the series victory, eliminating the Predators in Game 4 of their qualification round series. That came after Filip Forsberg tied the game with goalie Juuse Saros pulled with 32 seconds left in regulation. Arizona's Darcy Kuemper was the star of the day, making 49 saves in the victory. "We couldn't get the extra goal. It wasn't for a lack of opportunities or effort. We just couldn't solve Kuemper," said Predators coach John Hynes, who was hired on Jan. 7 to jump-start their season. Full recap.

The nightmare became reality for the Penguins: Carey Price made 22 saves to shut them out in Game 4, as Montreal stunned Pittsburgh and eliminated the Penguins from the postseason. Price faced 133 shots in the series and posted a .947 save percentage. Artturi Lehkonen scored with 4:11 remaining in the third period, and Shea Weber added an empty netter. "Listen, it's a three-out-of-five. Anything can happen," captain Sidney Crosby said. "We did some good things. Did we do enough? No. Give them credit. They played really well and got some big plays throughout the four games." Crosby had two goals and an assist in the series. Evgeni Malkin had one assist in four games. Full recap.

Corey Crawford made 43 saves and was the Blackhawks' best penalty killer against a potent Oilers power play, helping Chicago shock Edmonton with a 3-2 Game 4 win to eliminate the Oil. Dominik Kubalik scored the tie-breaking goal at 8:30 of the third period, assisted by Jonathan Toews. After being asked about the strides they made this season, Oilers defenseman Darnell Nurse said, "At the end of the day, you play this game to win a Stanley Cup. And we're sitting here after a qualifier not even in the playoffs, not even in the top 16. So you can talk about strides all you want. I don't think anyone's happy." Full recap.

On Thursday, it was the Blue Jackets erasing a 3-0 deficit to stun the Maple Leafs with an overtime win. On Friday, it was the Leafs doing the same, as Auston Matthews' power-play goal at 13:10 of overtime gave them the 4-3 win in Game 4. But the Leafs' rally was downright miraculous: William Nylander and John Tavares scored 51 seconds apart, and then Zach Hyman tied it 3-3 with 23 seconds left in the third period, and all of the goals came with Frederik Andersen pulled for an extra attacker. "It's crazy the way that it worked out. We've got new life. We were getting CPR there for a little bit," said Leafs coach Sheldon Keefe. Game 5 is Sunday night. Full recap.

Chris Tanev's goal just 11 seconds into overtime gave the Canucks the 5-4 win and eliminated the Wild in Game 4. The goal tied for the second-earliest overtime goal in NHL postseason history; the Islanders' J.P. Parise scored at 11 seconds of overtime against the Rangers in 1975, and the Canucks' Alex Burrows scored at 11 seconds of overtime against the Bruins in 2011. Montreal's Brian Skrudland scored nine seconds in against Calgary in 1986. The Canucks rallied back from deficits three times in the game, including with Bo Horvat's goal at 14:14 of the third period that tied the game. It marks the first time Vancouver has advanced in the postseason since 2011 and its first appearance in the round of 16 since 2015. Full recap.

Kuemper has now faced more shots (163) than any other goalie in the postseason and had a .933 save percentage in the series win over Nashville. "Darcy kept us in. That's the facts. They were peppering us. He let us get our legs under us," said Yotes coach Rick Tocchet, who watched Kuemper make 15 saves in the first period. "I think some of the younger guys were a little nervous. He had a hell of a series for us. A hell of a series."

The Leafs star assisted on their second and third goals of the third-period rally and slammed home the game-winner in overtime for the victory. He leads the Leafs with six points in four games.

Last month, Crawford was quarantined at home after testing positive for COVID-19. There were some questions about his status for the postseason after his training was interrupted. But with 43 saves in the game, he played his best hockey in Game 4. "It wasn't the best scenario. I would have liked a few more weeks of practice. It is what it is. I'm just trying to work hard to be ready. I felt way better each game," he said.

"I think you have that answer, Hedge."

"Just what you said, Dave, I'm not gonna explain it."

"Have not talked to the trainers."

-- the totality of Columbus coach John Tortorella's news conference after the Jackets' Game 4 loss, a media availability that lasted around 57 seconds

Overtime hero Brad Richardson gets a bath from the Coyotes.

Nick Foligno was furious when he was whistled for tripping in overtime, leading to the Maple Leafs' game-winning goal. Was it the right call, or did Morgan Rielly work the ref? 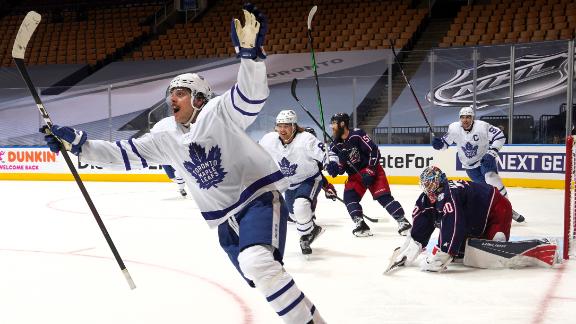 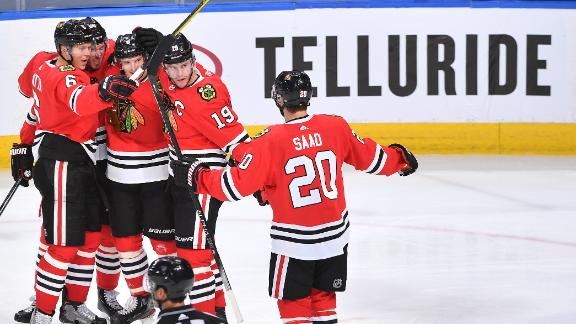