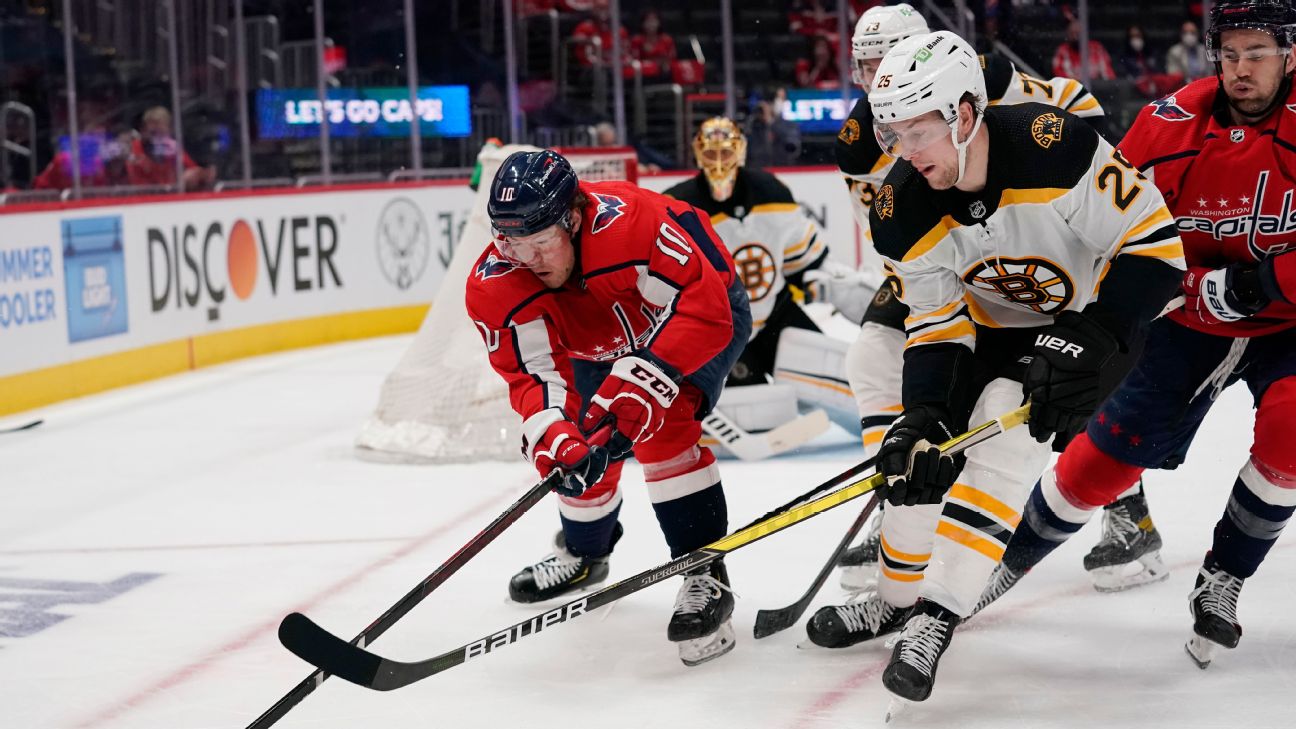 We've had some remarkable -- and tense -- hockey so far in the Stanley Cup playoffs, and if Tuesday had a theme, it was stellar goaltending. Netminders in all three games stole the show.

On Wednesday, Canadian teams get to join the party, as the North Division slate finally kicks off with Game 1 of Edmonton Oilers-Winnipeg Jets -- just a few days after everyone else.

This series is about as tight as you can get. And it's not just this year. Bruins vs. Capitals is the only head-to-head matchup in Stanley Cup playoffs history with 10-plus consecutive one-goal games (they've now done this in 11 straight games dating back to the 2012 Eastern Conference quarterfinals). Oh, and four of the past five games have required overtime. Vitek Vanecek (hurt in Game 1) and Lars Eller (injured in Game 2) are both day-to-day for Washington. Could Ilya Samsonov and Evgeny Kuznetsov -- who both traveled to Boston -- draw back into the lineup? An underrated storyline: The Bruins have been crushing Washington in the faceoff circle, 41-24 (63.1%).

The first game of this playoff series -- with 12,000 fans in Carolina's arena -- felt like the most normal hockey game we've seen in North America in more than a year. Something to monitor is the health of Jaccob Slavin -- who played 21 minutes in Game 1, but is clearly banged up. "Slavin's going to be dealing with something until probably we get finished," coach Rod Brind'Amour said. "Hopefully he's good to go, but he might be a game-time decision for a while yet." It wouldn't be a surprise to see Eeli Tolvanen draw back into the lineup for Nashville, after a surprise scratch in Game 1 (coach John Hynes opted for size, but Tolvanen did lead the team with six power-play goals this season).

Welcome to the playoffs, North Division! It's been a wild ride so far. This series is likely decided by two Connors: McDavid for Edmonton and Hellebuyck for Winnipeg. We all know how McDavid -- who scored at an epic pace this season -- can take over a game. But so too can Hellebuyck, the reigning Vezina Trophy winner, who posted a .922 save percentage and two shutouts in the Jets' 17-game postseason run in 2018. The Jets stumbled to the finish, and were bludgeoned by the Oilers in the regular season, losing seven of nine games and being outscored by 13 goals in total.Series preview

Ryan O'Reilly summed up Game 1 for the Blues pretty succinctly: "They were by far the better team. If it wasn't for [Jordan Binnington], it could have been messy early." Binnington kept the Blues alive, but St. Louis couldn't keep up with the Avs' team speed. The Blues need to be more aggressive on the forecheck to keep the Avs on their toes. Once again they'll be without leading scorer David Perron (COVID-19 protocols). As for Colorado? If the Avs can pick up where they left off -- with an 18-5 edge in shots in the third period of Game 1 -- they'll be just fine.

The Penguins did something they hadn't done since their 2017 Stanley Cup clincher in Nashville: win a playoff game when Sidney Crosby has zero points (snapping a six-game losing streak). Pittsburgh opened the scoring less than four minutes in, but the Islanders had more high-danger chances in both the first period (7-3) and second (5-2). However, goalie Tristan Jarry, bouncing back from a shaky Game 1 performance, kept the Penguins afloat by making key saves on the Islanders' only power play of the game -- which was in the final 90 seconds. Semyon Varlamov, who was unavailable in Game 1, overcame an early gaffe to make 43 saves for the Isles. Full recap

Coach Joel Quenneville opted for Chris Driedger over Sergei Bobrovsky in goal, the latter of whom stopped 35 of 40 shots in the opener. Driedger was solid in his first playoff appearance since he was in juniors seven years ago, stopping 26 of 28 shots. But this one was all about Tampa Bay. Steven Stamkos opened the scoring less than five minutes in, and an Ondrej Palat goal gave Tampa Bay a 2-0 lead after the first. Here's the obligatory mention that over the past five years, teams that took a 2-0 series lead in a best-of-seven series by winning both games on the road have won 22 of 23 series. Full recap

Marc-Andre Fleury started for the second straight game. Eventually, Robin Lehner should work into the rotation, but why not ride the hot hand? A running storyline was Fleury not getting offensive support. In his previous two playoff starts (dating back to last season) he stopped 53 of 55 shots (.964 save percentage), but his team scored zero goals. It was looking like more of the same Tuesday, especially when Matt Dumba opened the scoring for Minnesota. But a quick answer by Jonathan Marchessault, plus Alex Tuch's goal nearly five minutes later changed that. Tuch also scored the empty-netter -- sweet revenge after the Wild sent him to the Golden Knights at the expansion draft, as part of a deal Minnesota worked because they were desperate to keep Dumba instead. Full recap

Jarry didn't have the best go in Game 1, which was his second career playoff game. He allowed four goals on his glove side, including two that were considered low-danger shots, per Natural Stat Trick.

In Game 2? After stopping 37 of 38 shots, the reviews are much better. Said teammate Mike Matheson: "He was making big save after big save. That's the Tristan Jarry that we all know and love. It was great to see that."

There's a reason Vasilevskiy has been a Vezina Trophy finalist in each of the past three seasons, and is likely to win the award for the second time this summer. He was tremendous, turning away 32 of 33 shots by the Panthers.

Flower is on top of his game right now. He stopped 34 of 35 shots against the Wild -- and even attempted to score an empty-net goal -- to continue his hot streak. Over his past three playoff games, he has stopped 87 of 90 shots (.967 save percentage). He has now allowed just one goal in his past three playoff starts.

Shenanigans of the day

The Battle of Florida has it all. Star power, physicality, relentless pace, rubber rats, a suspension, a goalie change, the chicken dance.

Pat Maroon broke out the grade school taunt at the end of the second period last night, as this series remained feisty:

For the record, this is not an NHL original. Tampa Bay forward Brian Boyle pulled the chicken taunt on Detroit's Justin Abdelkader in a 2016 playoff game.

Minnesota couldn't take a 2-0 lead on Vegas, which would have been a historic moment for the franchise.

Since Minnesota entered the league in 2000-01, only two teams have never led a playoff series 2-0: the Panthers and the Wild.

Down but not out, the Wild insist the series can shift when they head back to Minnesota. Said Dumba: "You're going to see a totally different team even at home. We're a different beast." 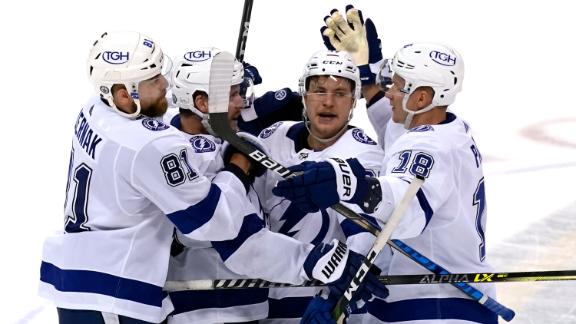 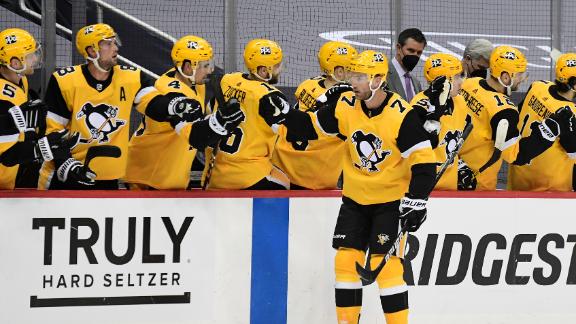 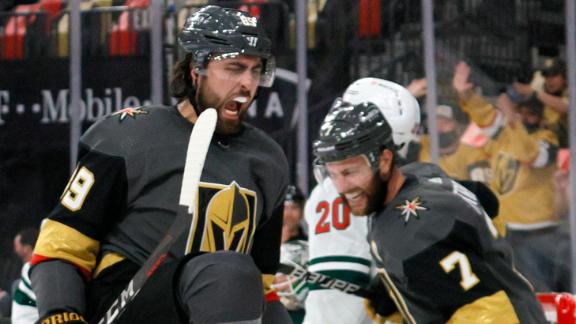