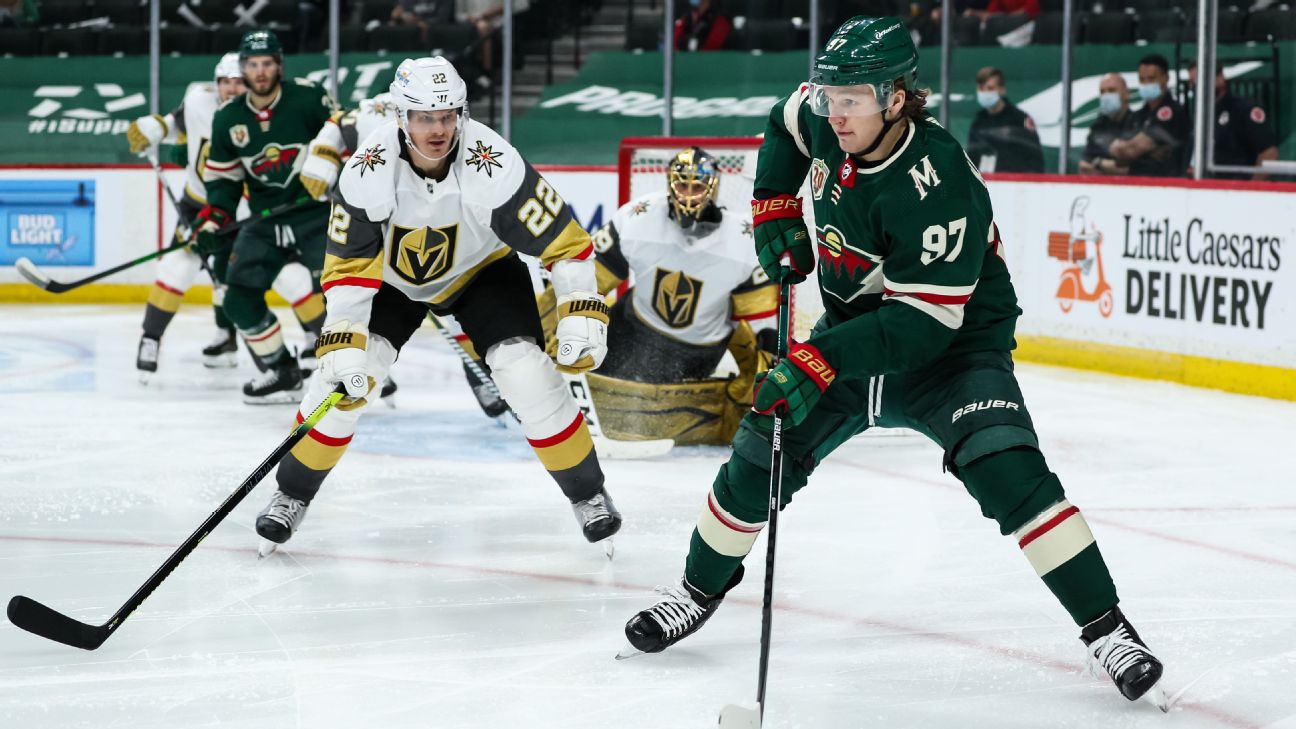 Three more teams -- the Florida Panthers, Minnesota Wild and, quite shockingly, the Edmonton Oilers -- could join them after Monday night's action.

The Penguins allowed the Islanders to control pace of play and to get inside their heads in their Game 4 loss. It's never a good sign when Evgeni Malkin has three minor penalties and no shot attempts. "I will be more disciplined next game. We're not happy. Not just me, the whole team is not happy with what we did tonight," Malkin said. "We need to forget this day and forget this game. It's a best of three right now." Expect rookie Ilya Sorokin (29 saves) to be back in the crease for the Islanders, having won both of his starts this series.

The Maple Leafs' power play helped tip the scales in Game 2, scoring twice on six opportunities. The Canadiens know that can't happen again. "We've got to finish every check, be hard on them, but be smart at it at the same time because they've got a good power play and a lot of shooting options. That's where they thrive, so we've just got to be smart," said Montreal defenseman Joel Edmundson. Maple Leafs coach Sheldon Keefe said the Canadiens made it clear they want to be physical. "I think the quote or term was they want to make it a war. If you're going to do that, you're at risk of getting penalties called against you. It's our job as a power play to make them pay for that," he said.

It might be Knight time for the Panthers. Rookie Spencer Knight, who was 4-0-0 in his first four NHL appearances, worked in the starter's net during Sunday's practice while Sergei Bobrovsky and Chris Driedger shared one. Meanwhile, the Lightning will let us know on Monday whether Nikita Kucherov and Mikhail Sergachev are good to go for Game 5 after leaving with injuries in Game 4. And then we'll find out if coach Jon Cooper's complaints about the Panthers taking "liberties" leads to tighter officiating in this elimination game.

We'll get to what happened in Game 3 in a moment, but the Oilers played themselves to the brink of elimination with a third-period collapse. The silver lining from Game 3 is that the Oilers' big stars finally hit the board after being shut down for the first two games. Leon Draisaitl scored two goals and had an assist, and Connor McDavid had three assists. They'll need them again to extend the series. "We dug ourselves a really big hole. But we'll take it one game at a time. It's all we can do at this point. We're not going to roll over and play dead for these guys," McDavid said.


The Wild had regular-season success against Vegas and took Game 1 in overtime 1-0. Fast forward to Monday night, and Minnesota has been outscored 12-3 since then, and faces elimination. Marc-Andre Fleury has won three straight, with a .966 save percentage and a 0.99 goals-against average for the series.

The Hurricanes walked into Nashville with a 2-0 series lead. Two heart-stopping, double-overtime losses later, and it's now a best-of-three series. Luke Kunin scored his second goal at 16:10 of the second overtime, while Juuse Saros made 58 saves for the Predators. Coach Rod Brind'Amour was still happy with the Canes' efforts, and said that they just couldn't capitalize on their chances. "Felt like we had the play most of the game. In overtime, it felt like we were at their end. Eventually, they're going to score if we don't score. We couldn't find a way to get one, but I love the way our guys are playing," he said. Will Carolina stick with rookie goaltender Alex Nedeljkovic for Game 5, or flip to veteran Petr Mrazek? Full recap

The Blues were swept out of the playoffs with another impressive Avalanche effort. Gabriel Landeskog, Mikko Rantanen and Nathan MacKinnon each had a goal and an assist. They outscored St. Louis 20-7 in the four games. Vladimir Tarasenko scored twice for the Blues. Turns out Ryan O'Reilly's proclamation before the series -- "We're going to have some fun and we're going to beat them" -- was bulletin board material for the Avalanche. "Yeah, it did," Landeskog said, when asked if it motivated them. "When you can close this series out without giving the opponents any life or any hope, it's definitely what we wanted to do and not easy to do on the road." Full recap

The Capitals are done, as the Bruins eliminated Alex Ovechkin & Co. in five games. Tuukka Rask made 40 saves, and Patrice Bergeron had the game-winning goal and a huge insurance goal in the third period off a T.J. Oshie turnover. The Capitals had a power outage again in Game 5, going 0-for-4 with the man advantage and just 3-for-21 for the series. The attention now turns to Ovechkin's contract status, as he's a pending unrestricted free agent. "We just lost in a playoff series. Let's talk about my contract and all that stuff later on," he said. Full recap

The Oilers were in control. Their star players, Connor McDavid and Leon Draisaitl, finally hit the scoresheet. They held a 4-1 lead in the third period. Then Josh Archibald decided to deliver a low-bridge hit on Winnipeg's Logan Stanley, earning a minor penalty for clipping with 8:49 left in the third period. Mathieu Perreault scored a power-play goal 30 seconds later. Blake Wheeler scored to cut the lead to 4-3, and then Josh Morrissey followed that goal with the game-tying tally just 14 seconds later. Nikolaj Ehlers won the game in overtime. Both coaches called the Archibald penalty "the turning point" of the game. McDavid said, "We kind of gave them a lifeline there, and they took advantage." Insult to injury: Archibald has a hearing with the Department of Player Safety for the incident. Full recap


Ehlers hadn't played since April 24 due to a shoulder injury. He missed the Jets' first two victories in Edmonton, but returned to the lineup for Game 3. His goal in the second period cut the Oilers' lead to 2-1, following two Leon Draisaitl goals. After the Jets rallied from a 4-1 deficit in the third period, Ehlers ended it at 9:13 of overtime with his second of the night. "Two huge goals for sure, but that positivity and energy that he brings," said coach Paul Maurice. "We're clearly happy to have him back."

Talk about a lucky break. In double OT, Kunin broke his stick in the neutral zone and had to go the Predators' bench for a new one. That left him wide open and unchecked on the game-winning goal. "I broke my stick, our equipment guy had it ready," Kunin said. "I got up in the slot and found a way to get it in there. Just happy it went in." As are the Predators.

The Bruins goalie made 40 saves, including 20 in the second period alone, to eliminate the Capitals. Rask has a .941 save percentage and a 1.81 goals-against average for the playoffs.

Beverage of the day

Taylor Lewan, offensive tackle for the Tennessee Titans, doused himself in beer to help get the Predators going. Apparently, it worked. Watch more of his sudsy antics here:

"To tell you honestly, I'm not ready for these questions right now. To answer all of those is there's no excuses. We got swept zero to four. I can [say] whatever I want to say, and say we don't fight enough, but it is what it is. This is embarrassing."

-- St. Louis Blues star Vladimir Tarasenko on getting swept by the Avalanche.

Old friends of the day

Capitals defenseman Zdeno Chara had an emotional handshake line with his former teammates on the Bruins. Big Z is an unrestricted free agent after this season. 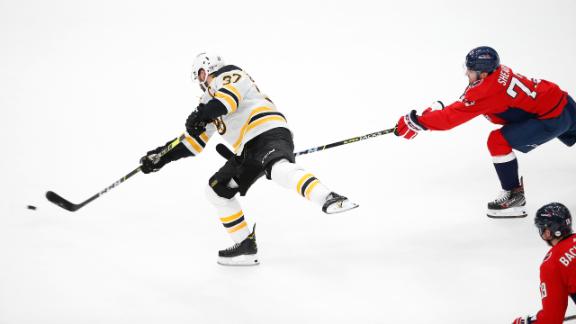 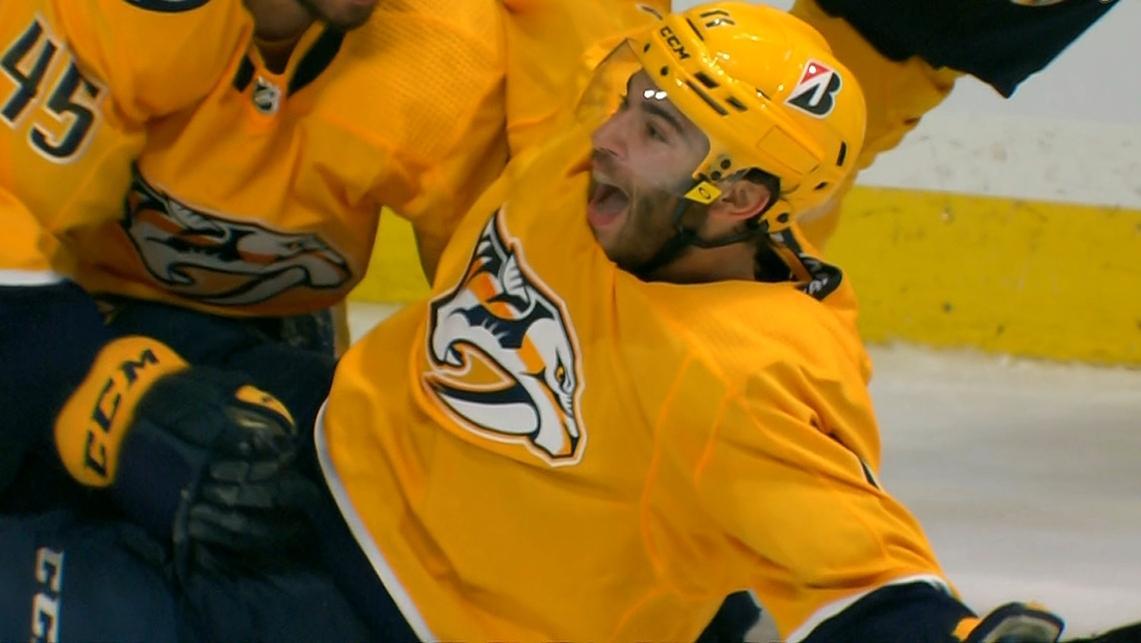 Predators win in double OT to even series vs. Hurricanes
Luke Kunin is left unmarked as he cuts to the net, receives the pass and scores to win it for Nashville in double overtime. 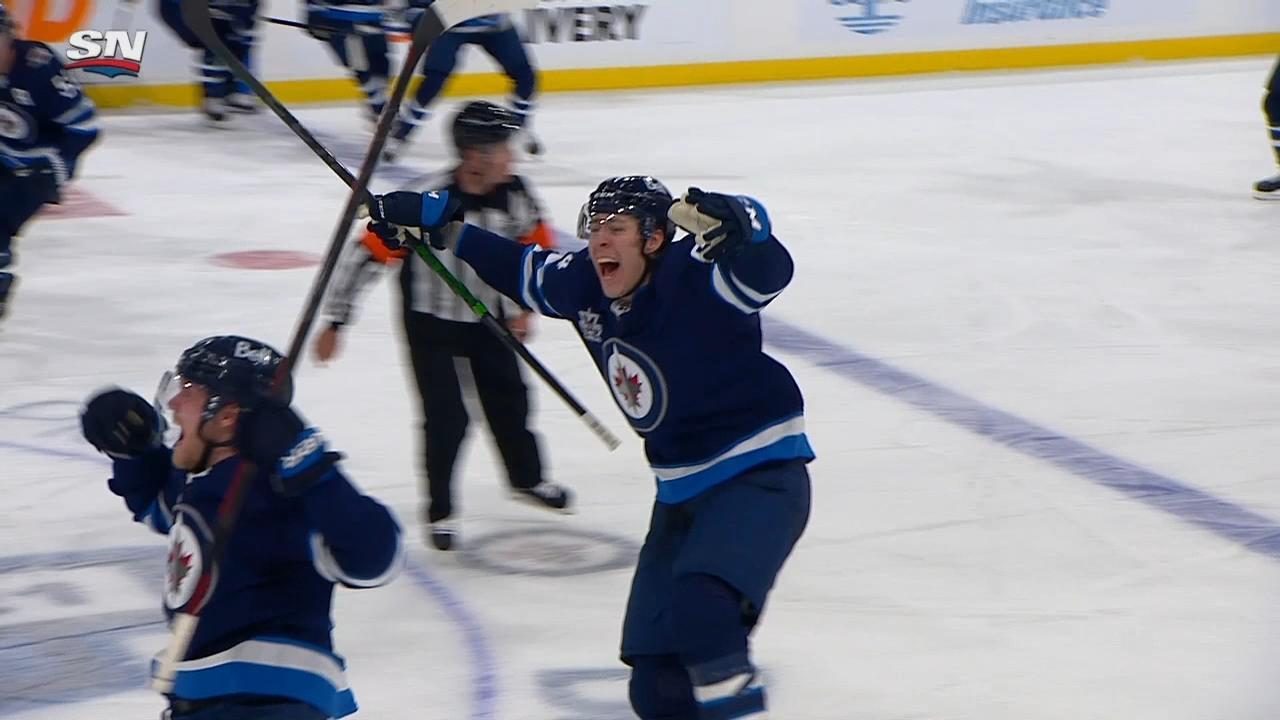 Jets complete comeback with Nikolaj Ehlers' goal to take 3-0 series lead
Winnipeg comes back from a three-goal deficit, and Nikolaj Ehlers wins it off a faceoff in overtime to put Edmonton in a 3-0 series hole. 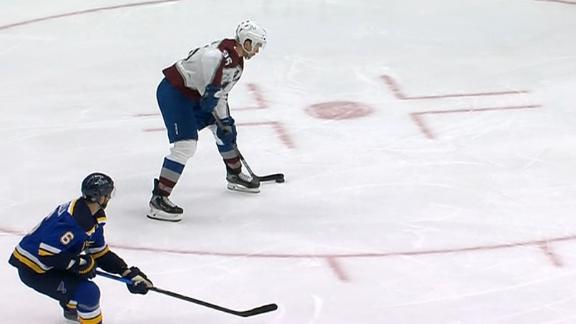