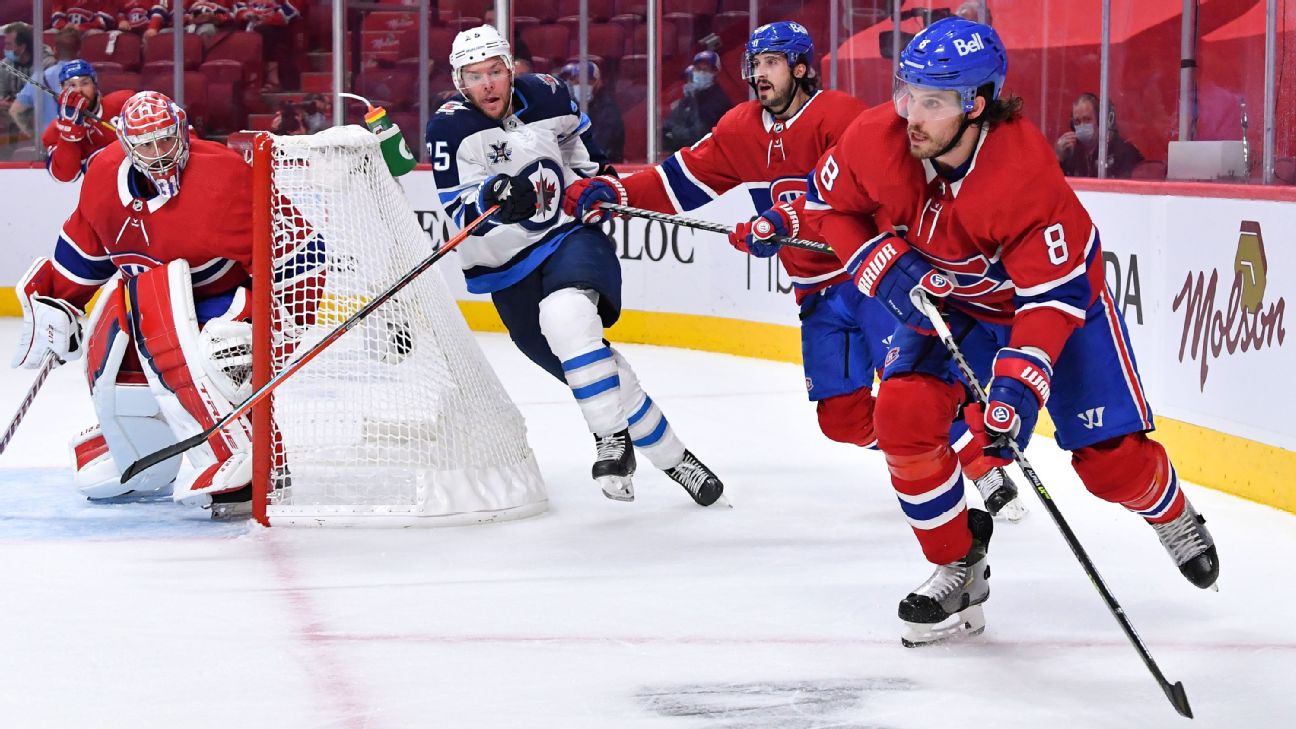 The 2021 Stanley Cup playoffs have seen two series sweeps already, and a third could be on the way, as the underdog Montreal Canadiens can eliminate the Winnipeg Jets in Game 4.

Meanwhile, the intense New York Islanders vs. Boston Bruins series heads back to Beantown for a pivotal Game 5, as that series stands at 2-2.

The Islanders knotted the series in Game 4, making this grinding battle -- with increasing animosity! -- a best-of-three affair. The Islanders are expected to bring back their same lineup configuration from their win. Boston coach Bruce Cassidy may make a few changes to his lineup. He said the line of Charlie Coyle with Nick Ritchie and Jake DeBrusk "didn't generate anything, to be honest with you," and were out there for the game-winning goal. But as for the rest of his lineup, he's just hoping for better results from his stars.

"I think some players will definitely be better just because they're good players and had an off night. I think that'll happen just because of who they are, less about the circumstances," he said. Like, for example, having David Pastrnak bury this next time:

Will the Jets go from a first-round sweep to getting swept in the second round? They certainly will if they play as they did in Game 3, and if they can't locate a modicum of confidence in their game. "Right now, they are an extremely confident team in what they're doing, and they're getting results from that," said Jets captain Blake Wheeler. "We are on the other side of the pendulum right now. We don't have a ton of confidence and we're kind of scratching and clawing to find it. But Game 4 can flip everything on its head." The Canadiens haven't swept a series since taking out the Tampa Bay Lightning in the first round in 2014.

The Canadiens took full advantage of an absolute dud of a game by the Jets on both ends of the rink. Montreal got the first three goals of the game from Corey Perry, Artturi Lehkonen and Joel Armia. Montreal has not trailed in a game for 376:14, which is the fifth-longest streak in Stanley Cup playoffs history. Meanwhile, the Jets were limited to one goal and generated just 13 shots in the first two periods of the game. Carey Price made 26 saves and now has a .938 save percentage and a 1.97 goals-against average for the postseason. Full recap

The Golden Knights found their swagger, shut down the Avalanche and tied this series after consecutive home wins. Brandon Saad opened the scoring for the Avalanche just 1:50 into the game, but it was all Vegas after that. Jonathan Marchessault had a hat trick and Max Pacioretty scored his second goal in two games. Marc-Andre Fleury made 17 saves, which is another way of saying that he only faced 18 shots from Colorado. The Avalanche's top line featuringNathan MacKinnon was held off the board at 5-on-5 for the third straight game. Philipp Grubauer made 30 saves in the loss. Full recap

The Vegas forward tallied a hat trick in Game 4, and now has five goals in the playoffs. His "Misfit Line" with William Karlsson and Reilly Smith led the way in this win. "They got hot at the right time and they look unstoppable right now," said Vegas coach Pete DeBoer.

Armia had a three-point night in Montreal's win. He assisted on Corey Perry's opening goal, had an unassisted shorthanded goal in the second period to make it 3-0, and then closed the scoring with an empty-net, shorthanded goal. Armia is the first player to score two shorthanded goals in a playoff game since Los Angeles Kings winger Dustin Brown in 2012 against the Vancouver Canucks.

Given the way Price is playing, and the way the Jets' offense has gone in the past two games, we'll give a third star to Lowry for finding a way to score in Game 3.

"I think that they're frustrated, for sure. It's tight checking right now. They're not just dealing with one line, they're dealing with multiple lines. There's people saying, 'Well, you gotta get them away from the Stone-Stevenson-Pacioretty line, and then they've got the Karlsson line that's doing equally as good a job and still producing at the other end. There's some heavy lifting there, and we haven't found a way."

-- Avalanche coach Jared Bednar, on the MacKinnon line's challenge against the Golden Knights

Fake-out of the day

Marchessault's first goal of the game, tying it 1-1, was quite an adventure. Colorado defenseman Patrick Nemeth turned the puck over and it appeared Marchessault scored. Except he didn't, play continued ... and then he actually did score:

"That turnover hurt. It's not the only one we made, but it's the one they capitalized on," said Bednar. "Some of our guys maybe thought the first one went in."

Good toss of the day

Robin Lehner once again contributes his hat to the collection from the bench after Marchessault completed the trick.

Bad toss of the day

Golden Knights starting goalie Fleury also made a toss in Game 4, sending the puck into the stands and ... right off an unsuspecting fan's noggin. But no worries -- there were smiles all around! 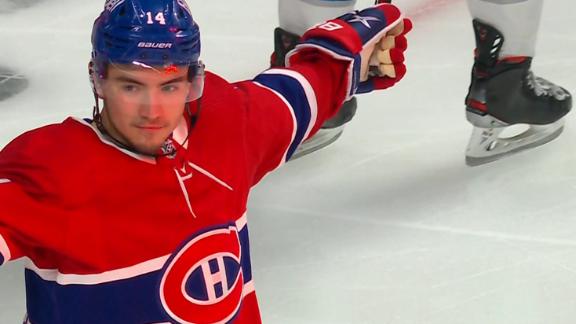 Canadiens extend lead with power-play goal in the 3rd
Nick Suzuki scores on the power play as the Canadiens beat the Jets 5-1 and take a 3-0 lead in the series. 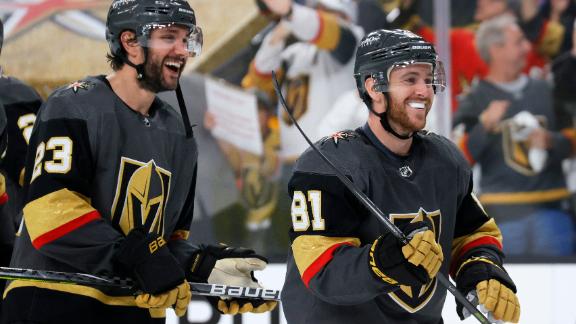