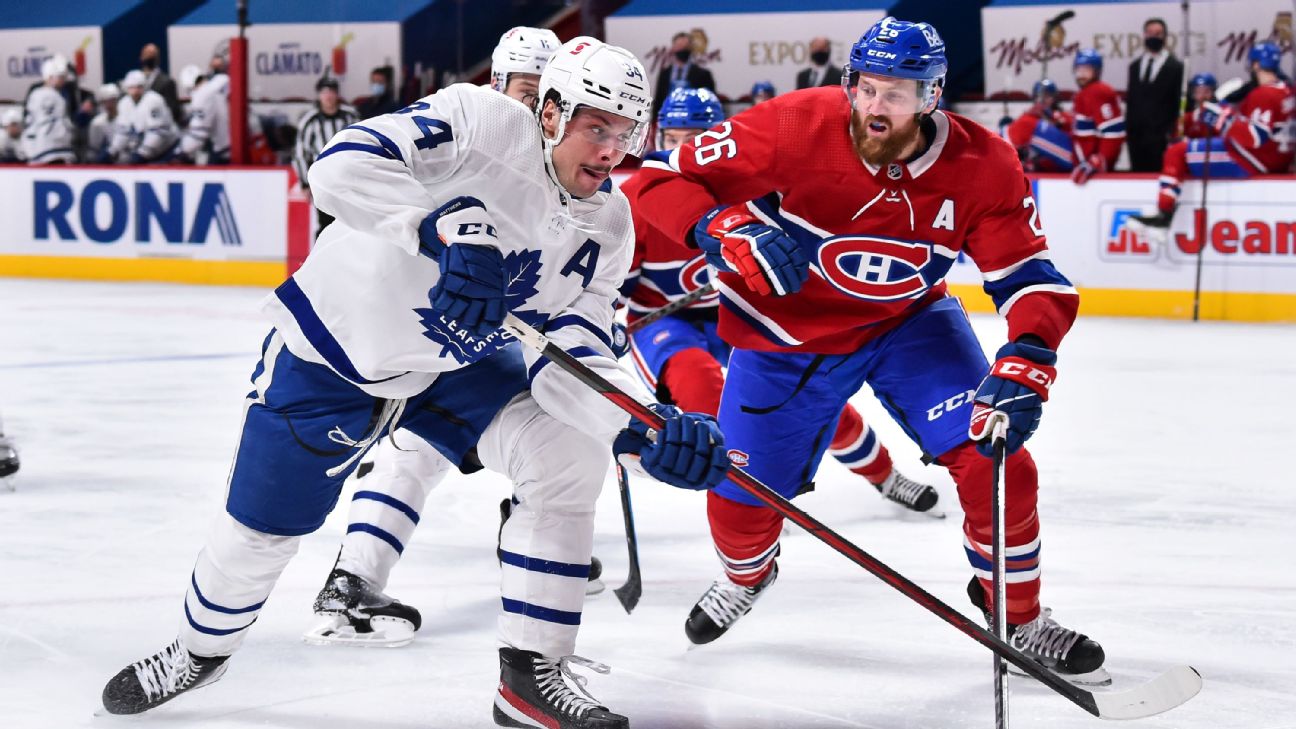 Tonight also brings pivotal Game 3s in the Pittsburgh Penguins-New York Islanders and Vegas Golden Knights-Minnesota Wild series, and the Florida Panthers hope to get back on track in the Battle of Florida against the Tampa Bay Lightning.

Sergei Bobrovsky started Game 1. Chris Driedger started Game 2. The Panthers are down 0-2. So do they turn to option No. 3, rookie Spencer Knight, in Game 3? Probably not, as it's expected Driedger could get the crease again vs. the Lightning. But if Florida loses again? It's gotta be Knight time.

The Islanders return to Nassau Coliseum to play in front of around 7,200 fans in the last days of the old barn before they relocate to a new building at Belmont Park for next season. "It just gets me excited to get to the Coli. That's the biggest thing. It was nice to play in front of fans again. I think we're allowed a little bit more for our next game and it'll be fun and loud in there and hopefully we can have a start like they did," said Scott Mayfield. The big question: Will Evgeni Malkin suit up for the Penguins to play in front of that crowd?

For the first time in 42 years, these two Original Six franchises will battle in the playoffs. "Like Yankees-Red Sox, I guess, in a way. A lot of rich history in this league over the last 100-plus years," said Auston Matthews of the Leafs. (Well, it's like Yankees-Red Sox circa 1999, at the very least.) The Leafs were 7-2-1 against Montreal in the regular season, averaging 3.40 goals per game and giving up an average of 2.50 goals per game.Series preview.

The Wild need more from their two big offensive players, Kevin Fiala and rookie sensation Kirill Kaprizov. They've both had some high-danger chances, but haven't been able to tally a point in the series. Fiala has 10 shots on goal. Kaprizov has five. The good news: Minnesota had the second highest goals-per-game average (3.61) in the regular season at home. The bad news: The Golden Knights had the best road defense (2.21 goals against per game) in the NHL.

Ilya Samsonov returned to the Capitals' crease for the first time since May 1, having spent some time on the NHL's COVID-19-related absences list. He played well, backstopping the Capitals to double overtime with a 40-save effort. But this miscommunication with defenseman Justin Schultz that resulted in Craig Smith's goal to win Game 3 at 5:48 of the second extra session rightfully sent Washington captain Alex Ovechkin into a tirade at the bench.

"He did a great job for us tonight. If he didn't stand on his head, we probably wouldn't have gotten to that point. I think he should know that, but that's definitely something we'll talk about," said the Capitals'John Carlson. Full recap.

The fans chanted "Ned!" for rookie goalie Alex Nedeljkovic, whose 32-save shutout gave the Hurricanes a 2-0 lead over the Predators in their series. Sebastian Aho scored twice for Carolina. "It starts with the hot goalie," Aho said. "You've got the confidence to put the pressure on their players. We know if they make a play, 'Ned' will bail us out." The Predators couldn't capitalize on a strong game from Juuse Saros, who made 28 saves. But with Nashville going 0-for-7 on the power play and going 0-for-10 for the series, he's not getting the offensive support. Defenseman Jaccob Slavin missed the game with a lower-body injury for Carolina. Full recap.

The Jets were short-handed, missing offensive stars Nikolaj Ehlers and Pierre-Luc Dubois. They were facing an Edmonton team that beat them seven out of nine games in the regular season, and facing Oilers star Connor McDavid, who had 22 points against the Jets this season. So, naturally, they shut down McDavid, get a stellar 32-save effort from Connor Hellebuyck and get a goal from Dominic Toninato at 9:14 of the third period to break a 1-1 tie and lead them to a stunning Game 1 win. "It's playoff hockey; it's tight," said Oilers coach Dave Tippett. "They got a break on the winning goal and the first empty-net goal, it hits the referee. That's the way things go." Full recap.

Nathan MacKinnon tallied a hat trick and added an assist while Joonas Donskoi had two goals and an assist in the Avalanche's 6-3 win over the Blues. But the game was more interesting than the final score. The Blues had their routine interrupted by a series of false positive COVID-19 tests from a U.S.-based lab, forcing players into isolation until their tests came back negative. But that meant goalie Jordan Binnington had no practice time before the game. Then, in the third period, the game was turned upside down when Nazem Kadri of Colorado was ejected for a hit to the head of Blues defenseman Justin Faulk. Brayden Schenn scored during the five-minute major penalty to cut the lead to 3-2, but that was as close as the Blues would get. "We've gotta find a way to defend better. It was just too easy for them," said Blues center Ryan O'Reilly. The Blues also lost defenseman Robert Bortuzzo on what appeared to be an elbow from Colorado's Tyson Jost. Full recap.

There was a load of pressure on him to carry the Jets in Game 1 since they were short-handed, and he made 32 saves to help lead them to victory. "We believe he's the best goaltender in the league, so that gives us a ton of confidence," said captain Blake Wheeler. "It's his birthday, he's getting a little bit older, so you guys are going to have to start bugging him about his age." Way to go, old-timer (Hellebuyck turned 28 on Wednesday).

The Avalanche star now leads the postseason with seven points, including five goals on 10 shots. MacKinnon's playoff hat trick was the fourth in Avalanche history.

Ned made 10 of his 32 saves on the penalty kill, which was the real key in Game 2 since the Predators had seven power plays. "All the guys in the PK did a great job. The No. 1 star was probably Ned. He was a stud tonight," said defenseman Brady Skjei. "To have a good PK, you need your goaltender playing well. He was phenomenal tonight."

Probable suspension of the day

Colorado center Nazem Kadri has been suspended five previous times by the NHL -- including twice in the playoffs, in consecutive seasons for the Maple Leafs -- and it's hard to fathom that this hit on Justin Faulk won't result in his sixth.

"That's a very dangerous hit. It's got to be a suspension," O'Reilly said. "He's a repeat offender. It's completely uncalled for. That's awful to see."

"Did we watch the same game?"

-- Predators coach John Hynes, after getting questions that were critical of his team's efforts.

Finish of the day

Taylor Hall with the impressive spin move to score another playoff goal for the Bruins. 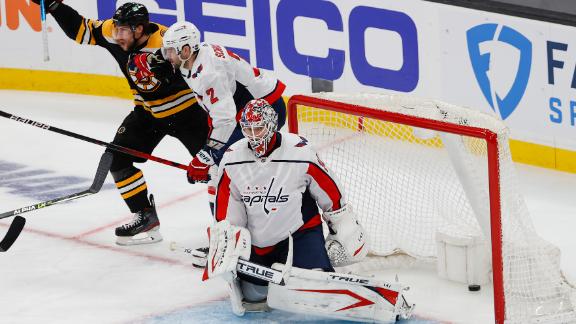 Capitals goalie's miscue leads to Bruins' double OT winner
Ilya Samsonov plays the puck too casually behind the net, and Craig Smith wins the race to the puck to score the Bruins' winner in double overtime. 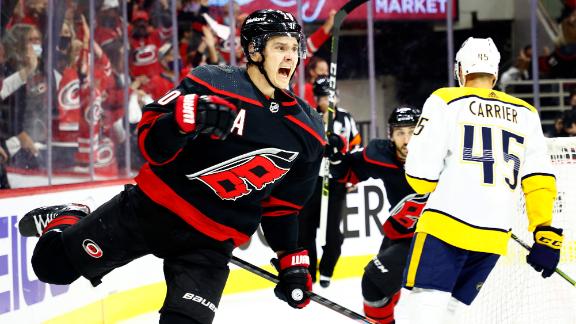 Aho nets 2 goals in Game 2 vs. Predators
Sebastian Aho scores the first two goals of the Hurricanes' 3-0 Game 2 win vs. the Predators. 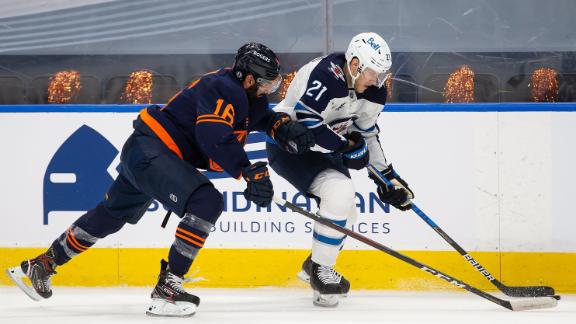 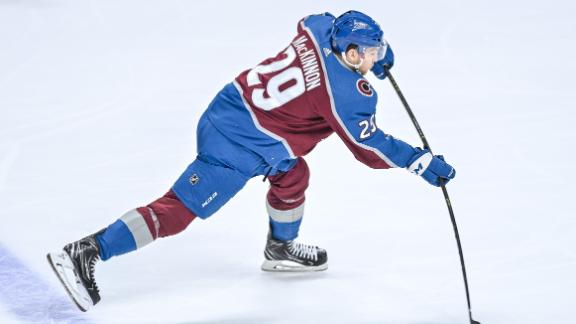 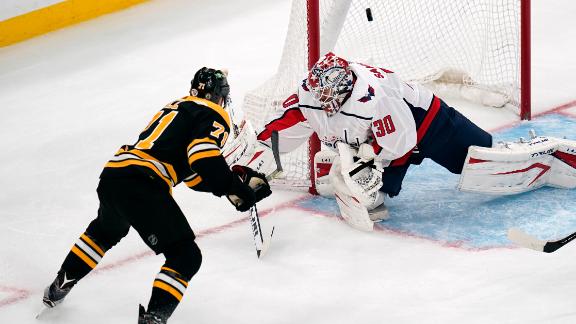