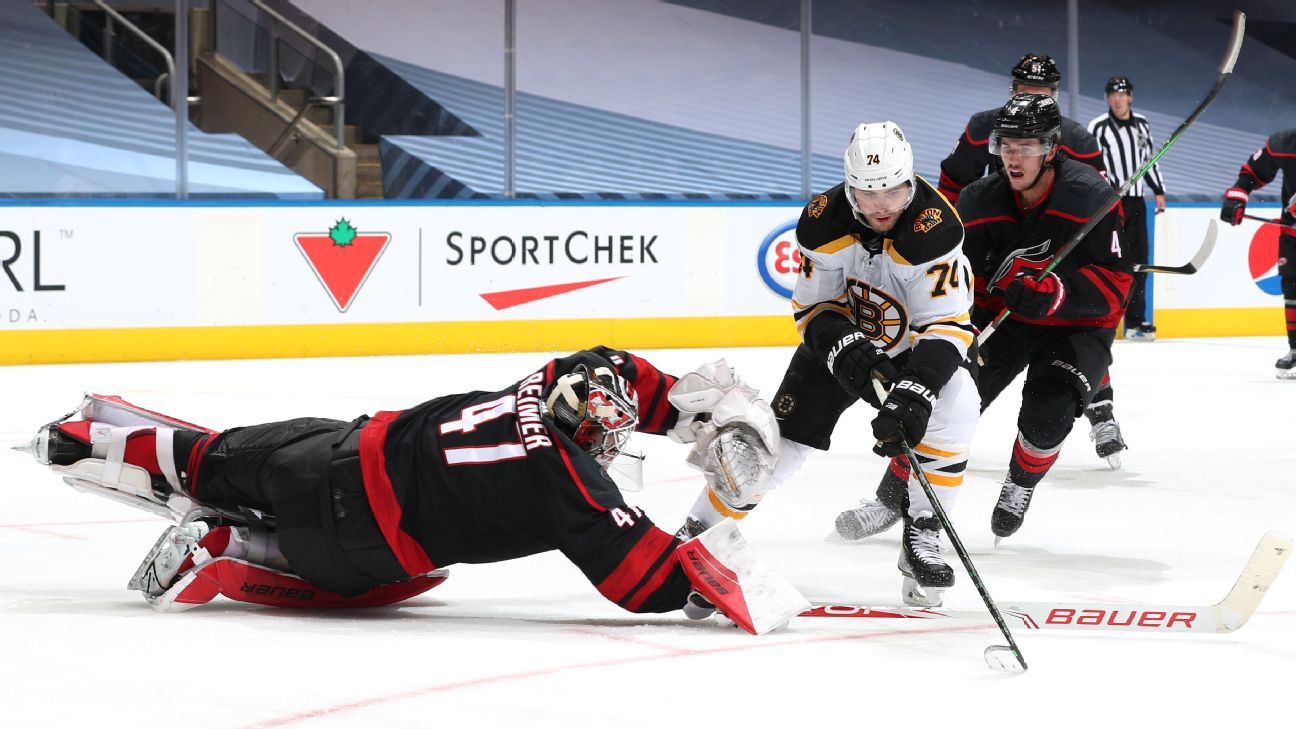 Fare thee well, Chicago Blackhawks. We'll always have your qualification round upset of the Edmonton Oilers.

Hence, the Vegas Golden Knights are the first team to advance to the conference semifinals. Four other teams have a chance to join them on Wednesday, with the Tampa Bay Lightning, Boston Bruins, Colorado Avalanche and Philadelphia Flyers all carrying 3-1 leads into their matchups on Wednesday.

The Lightning have a chance to exact their revenge on the Blue Jackets, but they know better than anyone that Columbus will not go quietly. "I'm not the first to say it, but the fourth one's the hardest one to win," said Lightning coach Jon Cooper. "You just have to match the desperation of the other team. You know their season's in the balance. You know how they're going to come out. It's tough: Clearly you're not in the same situation as the other team, but you have to put yourself in that mindset."

The Hurricanes have two major psychological tests in Game 5: Overcoming the epic third-period collapse that lost them Game 4 and, oh yeah, trying to avoid elimination at the hands of the Bruins for the second straight season. Coach Rod Brind'Amour said "it was tough" to see the players' emotional state in practice on Tuesday. "It's a new day. We have to start fresh. Our backs are against the wall. We have nothing to lose," Brind'Amour said. "We don't have any tomorrow." Jordan Staal was questionable for Game 5 after an injury in Game 4, but he did skate with the Hurricanes on Tuesday.

Speaking of humbling experiences, the Coyotes limp back for Game 5 after their 7-1 waxing at the hands of the Avalanche in Game 4. "You make a stand. You look for players not to hide," said coach Rick Tocchet. "We need some guys just to reboot it and come with a will and a battle to win this game." Tocchet said the key is to not "run around," and to trust their system. Nick Schmaltz and Conor Garland are both questionable for Game 5. Andre Burakovsky didn't finish Game 4 for the Avs, but coach Jared Bednar indicated "he will be good to go."

Outside of their Game 2 outburst, Montreal has scored one goal in the series against a stout Flyers defense, including two straight shutouts. "Carter [Hart] is a huge part of this. We're not playing perfect hockey. But in front of him, there's a lot of effort going on there. Both to be in the right position and the blocked shots," said Philly coach Alain Vigneault. "That's a big part about finding ways to win. The defensive plays are as important as the offensive part."

The big news for the Blues this week was Vladimir Tarasenko leaving the bubble to get his surgically repaired shoulder examined back in St. Louis. We'll know more about his status next Monday. After winning the first two contests, Vancouver lost back-to-back games to the Blues, who have started dominating this series from a possession standpoint. "We're in a best-of-three against one of the better teams in the league. I've got a lot of belief in our group and they've got a lot of belief in themselves right now," said Green.

Question of the day: Is this now Ryan O'Reilly's series?

The Blues have evened their series against the Canucks because Ryan O'Reilly decided to take over. In four games, last season's Conn Smythe winner has three goals, three primary assists and the Blues have a 97-29 advantage in shot attempts when he's on the ice. That includes a 16-3 advantage in high-danger chances, per ESPN contributor Dimitri Filipovic. So what do the Canucks do? "We've gotta take advantage of when we have the puck in their zone and make them defend," said Vancouver coach Travis Green. That's the mantra: Make O'Reilly spend more time in his zone than the Canucks' zone. But that's easier said than done.

Colorado Avalanche over Arizona Coyotes in regulation (-129, DraftKings). Rick Tocchet spoke some strong words about having pride in their game and rebounding from embarrassment after what he called a "debacle" in Game 4. They were defiant in victory once when down 2-0, but they've been outclassed by Colorado in every game of the series. Barring another goaltending miracle from Darcy Kuemper or Antti Raanta, the Avalanche advance without the necessity of overtime.

We regret to inform you this series has gotten super boring. The Flyers' defense and Carter Hart (29 saves) shut out the Canadiens for the second straight game to take a commanding 3-1 series lead. Montreal looked like it was going to make this a series against their emotional 5-0 win in Game 2, following the hospitalization of head coach Claude Julien. " I don't think we really tested [Hart] much the last two games. ... We have to get better around the net and be hungrier," said Canadiens forward Phillip Danault. Full recap.

The Stars are rolling now. John Klingberg's third-period goal was the difference in their 2-1 win, pushing Calgary to the brink. Anton Khudobin made 28 saves for the Stars. Now comes the hard part: Closing out an opponent. The Stars did that in the first round last season against Nashville in six games. But St. Louis rallied with two wins in the semifinals to eliminate them. "Against Nashville, that was our first taste of seeing an opposing team come at you with everything they've got," said Tyler Seguin. "In St. Louis, in Game 6, we stood back a little bit. So we have to attack [the Flames]. We know they're going to be ready." Full recap.

Their backs against the wall, the Capitals played their best game of the restarted season and survived elimination. Evgeny Kuznetsov had a goal and an assist while Braden Holtby made 24 saves, but it was the Alex Ovechkin Show with the game-tying and game-winning goals. "If we're going to play like that, we have a pretty good chance to come back, but we're going to take a game at a time," Ovechkin said. Full recap.

The Blackhawks didn't go quietly, but they'll be leaving the bubble after the Golden Knights eliminated them in Game 5. Max Pacioretty and Mark Stone erased a 2-0 Blackhawks lead, Alec Martinez answered a Patrick Kane goal and Alex Tuch's third period tally was the difference for Vegas. Corey Crawford made 35 saves in another strong performance. "People are quick to jump on him, put the onus on him. He's always been good for us in the big games," said center Jonathan Toews. Full recap.

Ovechkin scored the game-tying and game-winning goals as the Capitals finally broke through with a win against the Islanders. He now has 69 career playoffs goals; even nicer, he passed Gordie Howe and Sidney Crosby for 18th in NHL history in postseason goals.

Hart now has a shutout streak of 120 minutes, seventh longest in Flyers playoff history. The 22-year-old also became the second-youngest goaltender in NHL history to record consecutive shutouts behind Harry Lumley of the 1945 Detroit Red Wings, who was 18.

Tuch scored the series-clincher going hard to the net for his fourth goal of the playoffs. "He's impossible to stop when he has that attack attitude that he's had the entire series. He could have had four or five goals in this series, so it was nice to have him bang one in there," said Vegas coach Peter DeBoer.

"It feels weird to be done." -- Blackhawks winger Patrick Kane, who felt that the Blackhawks upped their intensity considerably in the last two games of the series.

Warm and fuzzies of the day

Goalie Robin Lehner was sent to Vegas at the trade deadline by Chicago. After eliminating them in Game 5, he took his time and embraced his former Blackhawks teammates in the handshake line for one of the most heartfelt moments of the postseason. "This was a huge win for our team, and this felt good for me to close out. It's weird playing your old team. I have a lot of friends over there," he said.

The Capitals made some cosmetic changes before Game 4, as Evgeny Kuznetsov shaved his head and Ilya Kovalchuk fashioned his facial hair into a goatee. "You always try to adapt and do things that you think can give you an edge. You try different stuff to maybe get you out of a funk. That's happened in every sport, for years and years," said Capitals coach Todd Reirden."This was an example of some different things that went on with our team. There are obviously many other things that go on behind closed doors."

So, good news for Capitals fans: You have two rally options to support your team's miracle comeback. And congratulations to all the people in the DMV who already rock a smooth scalp and a goatee. You're good. 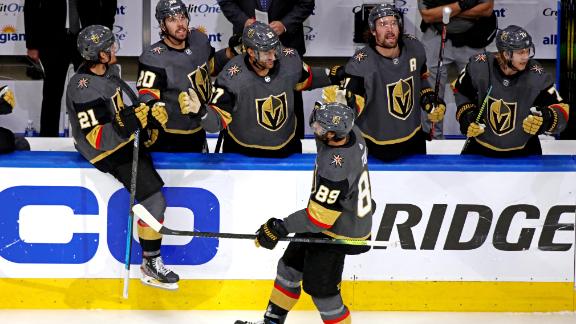 Tuch nets go-ahead goal as Golden Knights top Blackhawks
Alex Tuch breaks a 3-3 tie in the third period to put the Golden Knights up for good as they advance past the Blackhawks in the first round. 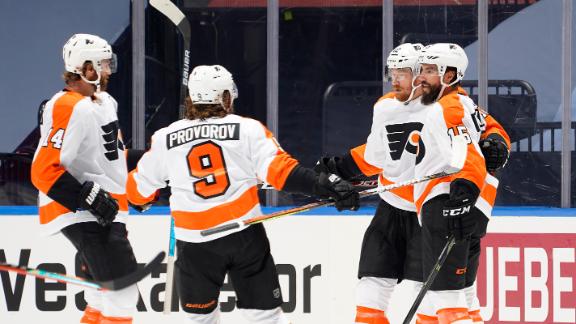 Flyers blank Canadiens to extend series lead
Michael Raffl and Philippe Myers score the Flyers' two goals in a 2-0 win over the Canadiens. 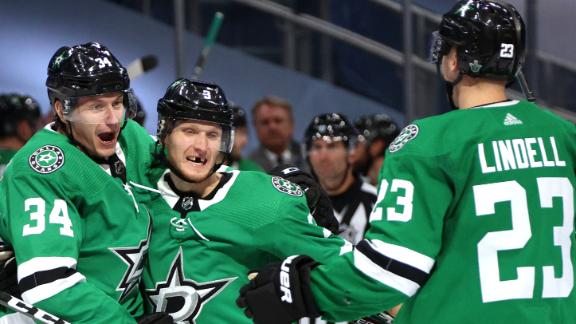 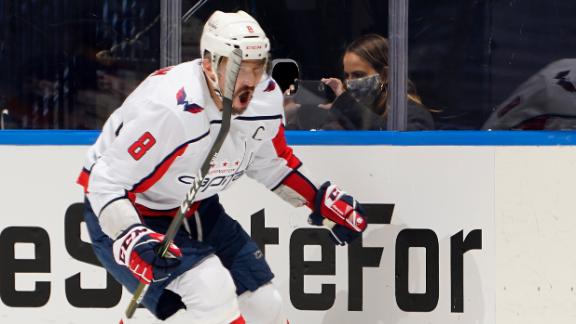