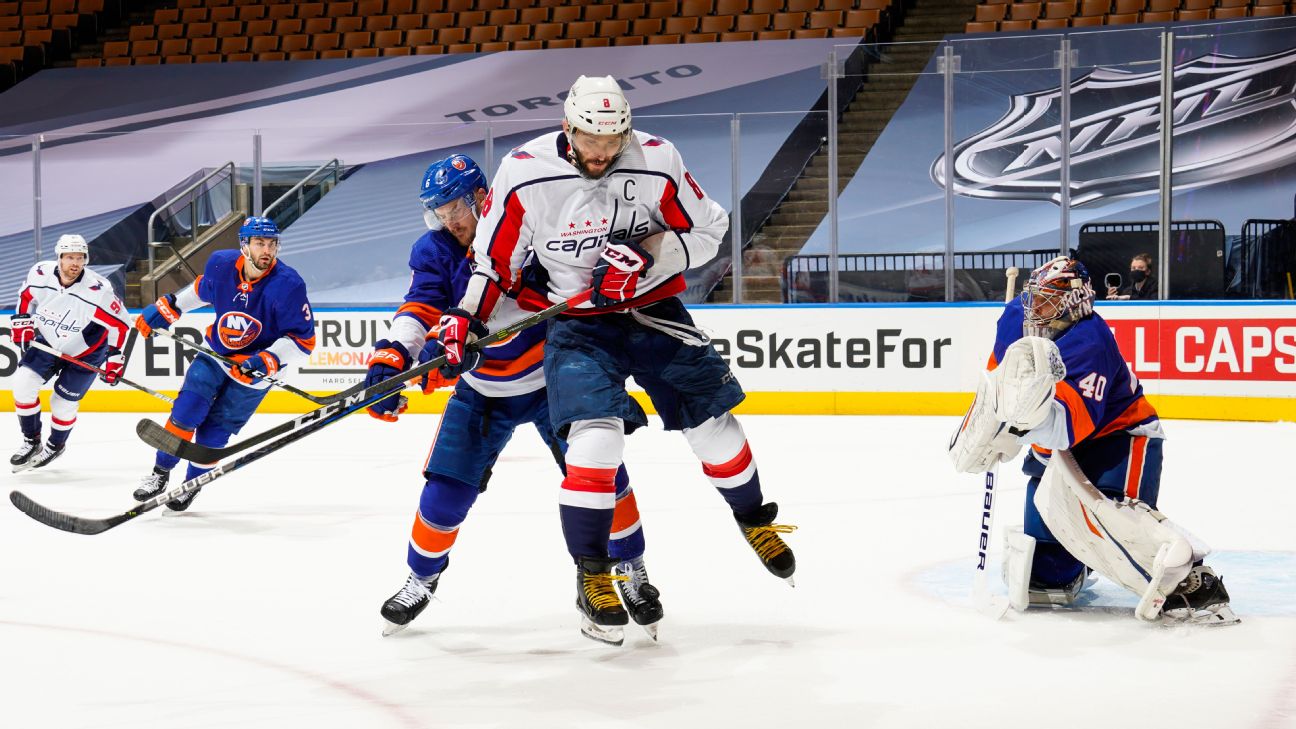 This is it. It's win or go home for the Chicago Blackhawks and Washington Capitals on Tuesday. Meanwhile, the defending champions can't be counted out just yet, as the St. Louis Blues have tied their series at 2. And how about those Boston Bruins? A four-goal onslaught in the third period gave them a crucial Game 4 victory and a commanding 3-1 series lead over the Carolina Hurricanes. We would not want to have faced Rod Brind'Amour in the locker room after this one.

The Flyers' offense hasn't been able to get going, scoring only three goals through the first three games of this series. They've also run into a brick wall in Carey Price, who is posting his best career postseason numbers, with a .953 save percentage, 1.40 goals-against average and two shutouts in seven games thus far. "I think we definitely have more to give -- offensively, anyway," Flyers center Sean Couturier said on Monday. "Defensively, we're there. We're responsible. We've got to find a way to create some chances." The Flyers aren't as concerned about Carter Hart, who returned to form after their blowout loss in Game 2. "It's a good thing he's a little too oblivious to some things," Philly winger Jakub Voracek said. "[Like] being a goalie in Philadelphia."

The Flames are the NHL's most penalized team this summer (34, and counting) but hold the strange distinction of having as many short-handed goals (three) as the Stars have on their power play. You can thank Tobias Rieder for that. Otherwise, this has been a tight series; in some games, one team dominates, but the other team gets the result. "There's very, very little separating these two teams," Dallas coach Rick Bowness said. "We know their strengths, they know our strengths. ... Really, the X's and O's are out if it, pretty much. We know what they're going to do, they know what we're going to do. Now it becomes one-on-one battles."

The Capitals keep insisting that they have more to give, but the clock is ticking. Nicklas Backstrom (concussion protocol) is again a game-time decision, so his teammates might need to do it without their first-line center. "Just get the first game and see where it takes us," Capitals winger Tom Wilson said. "It's doable." The Isles had a chance to sweep Florida in the qualifying round too, but needed an extra game to seal it. "We have to be ready to go and match their desperation," New York's Brock Nelson said. "They're playing like there's no tomorrow."

OK, so the Blackhawks can't rely on Corey Crawford as heavily as they did in Game 4 (48 saves is a burden no goaltender should have to handle) but the pending free agent was sensational, keeping his team alive another game. Can they keep this series going, or is a Vegas win inevitable at this point? The Golden Knights controlled most of Game 4; at 5-on-5, they had 38 scoring chances, compared to Chicago's 10. "We probably stole one [on Sunday]," Blackhawks coach Jeremy Colliton said. "And now we have a chance to take momentum in the series and put some pressure on them."

Question of the day: If this is it for the Washington Capitals, are big changes on the way?

We already knew that this is probably it for Braden Holtby as the Capitals starting goaltender. Washington will likely let Holtby walk in free agency, opting for the cheaper and younger Ilya Samsonov. But could this be the end of Todd Reirden's tenure as coach? Management and ownership will do a full audit. Reirden has led this veteran team to two terrific regular seasons and -- especially if Washington loses today -- two disappointing early playoff exits. Change could be on the horizon.

When the Lightning were swept by the Blue Jackets in the first round of last year's playoffs, they kept blowing leads. Not so in this gritty Game 4 performance. Andrei Vasilevskiy (28 saves) starred in this game, but so too did Tampa Bay's second line of Barclay Goodrow, Blake Coleman and Yanni Gourde, which accounted for both goals. "They're like gnats," Tampa Bay coach Jon Cooper said. "I feel like they're always just buzzing around and as you try to knock them away they just never leave. They're pests ... they don't have an off switch." Full recap.

The key for the Avs in this game was simple: get the first goal. If the Coyotes score first, they just stack everyone in front of Darcy Kuemper; and as Game 3 proved, it's nearly impossible to penetrate. Well, Colorado did just that. And then the Avs scored again, and again, and again. Yeah this one got out of control. "This whole bubble thing ... it's about who wants to stay," Coyotes coach Rick Tocchet said. "You can tell who wants to stay and who wants to go home. For this game, it looked like we wanted to go home." Full recap.

No team has had a more brilliant third period in these playoffs than Boston's on Monday night. The Canes led 2-0 in the third. A devastating Charlie McAvoy hit on Jordan Staal shifted the energy:

The Bruins then scored four goals in a span of 6:51, and the third period stat lines are insane. By the time Carolina pulled James Reimer, the Bruins had out-shot the Canes 16-0 in the period, with a 27-4 edge in shot attempts and 6-0 in high-danger chances, per Natural Stat Trick. "We have a ton of character in our room," Boston winger Brad Marchand said. "We just continued to impose our will."Full recap.

The defending champions were down, but not out. After we all wrote them off for being useless in this series, the Blues have climbed back to even things up. It was the second straight start and win for Jake Allen, and he was sharp, despite a light workload. Jordan Binnington could be benched for the foreseeable future. The Canucks looked like a young team in this game, a bit unfocused, and went 0-for-6 on the power play. But J.T. Miller doesn't think you can count them out, either. "It's not like we're getting our butts whooped up and down the rink," Miller said. "They're a good team, we're a good team."Full recap.

The 23-year-old was a major catalyst in the third-period comeback, including a diving goal that put the Bruins on the board and another to seal it. "We needed some goals, let's face it," coach Bruce Cassidy said. "Sometimes he gets streaky, so hopefully this sets him off."

O'Reilly had a pair of goals and an assist to pace the Blues on Tuesday, and he's been on quite a tear lately.

The trade that brought Kadri over from Toronto gets better and better for the Avs. Kadri had two first-period goals to get Colorado going on Monday. He has four goals in seven games this postseason, after scoring just three in 19 previous playoff games.

Bubble activity of the day

The Vegas Golden Knights' "Fun Committee" has our attention after their movie night, which had serious sleep-away camp vibes. They've also planned corn hole and a poker tournament, as well as a Mario Kart tournament on Nintendo 64. Can you tell these guys like to compete?

"You know who is really good is actually Ryan Reaves," forward Nick Cousins said. "I feel like you can't tell him I said that because it'll go right to his head, but he was actually my partner and he carried us for a little bit. He was Donkey Kong, and he was lights-out."

Dekes of the day

Every so often, Cale Makar makes a play like this that reminds us why he's simply on another level than everyone else:

"I wanted to make people that support this organization proud of how we play. I think we've done that for most of the time that I've been here. Today we didn't. That's the most disturbing thing for me." -- Carolina coach Rod Brind'Amour. 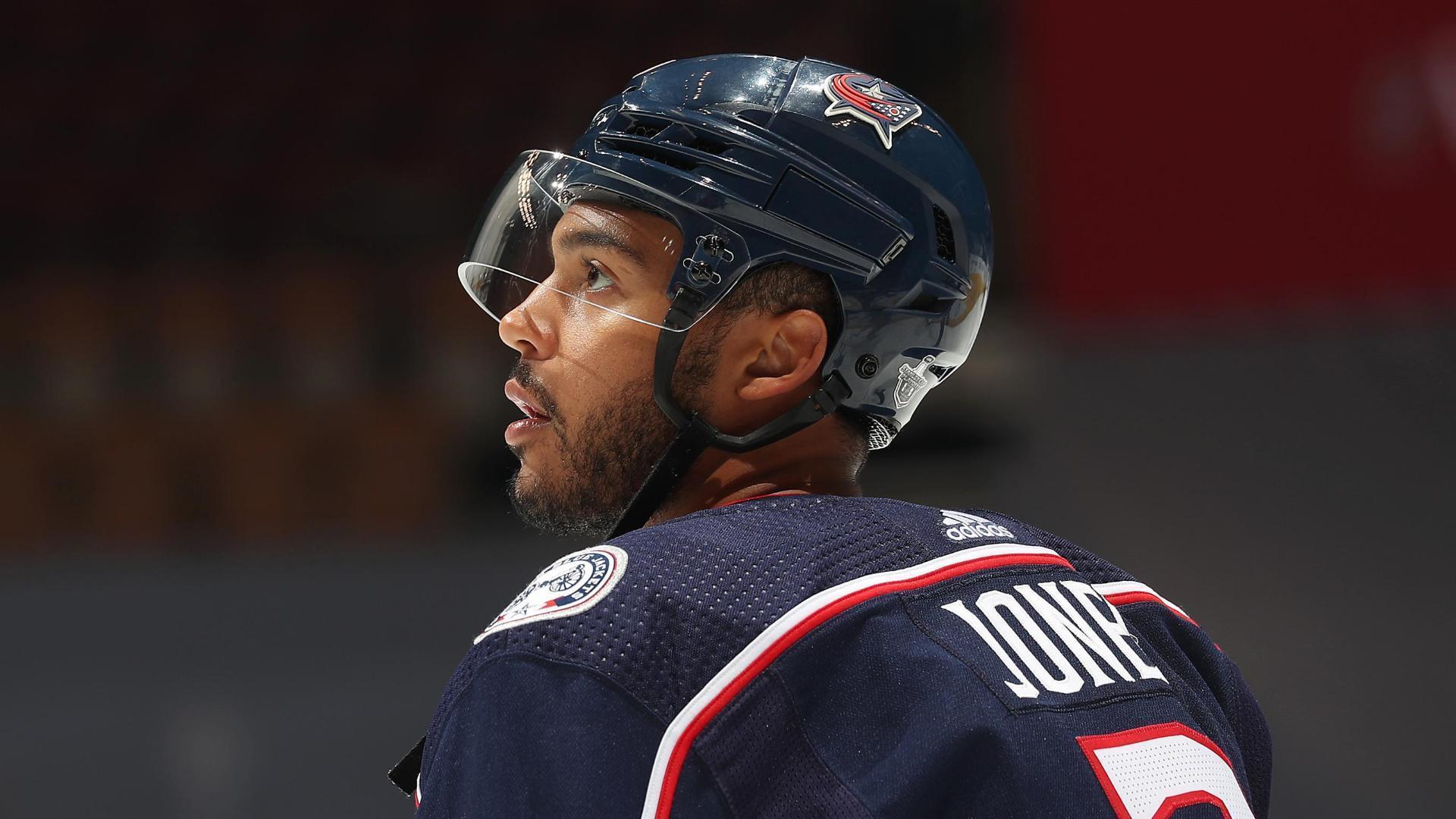 Whose stock is up or down in the Stanley Cup Playoffs?
ESPN's Emily Kaplan and Greg Wyshynski break down the quarterfinals and discuss whose stock is up and whose is down. 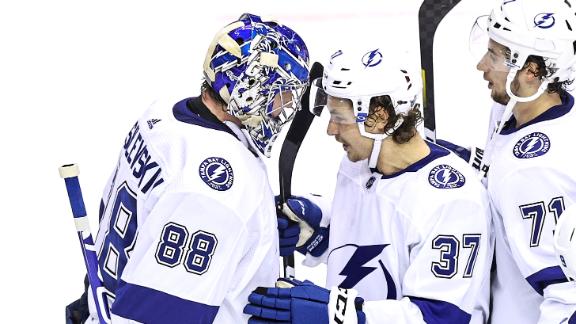 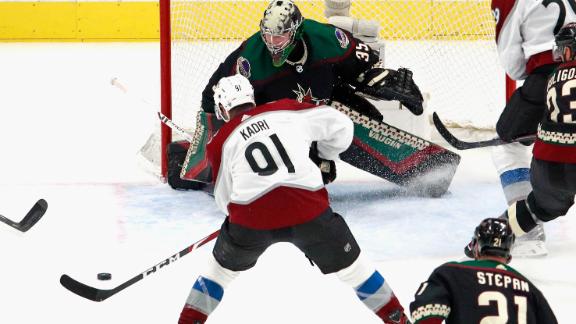 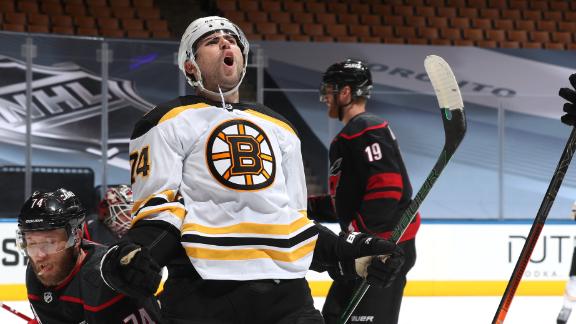 DeBrusk leads Bruins to comeback win over Hurricanes
Jake DeBrusk scores two of the Bruins' four goals in the third period as they rally past the Hurricanes for a 4-2 win. 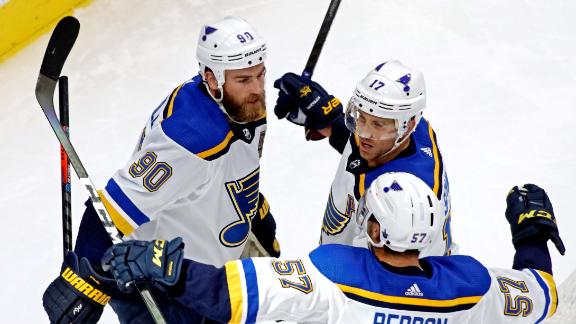