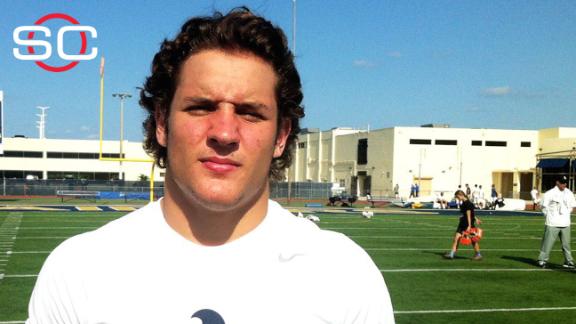 Nick Bosa, the No. 3-ranked prospect in the country, is following a familiar path.

The five-star prospect, who is the No. 1-ranked defensive end in the Class of 2016, committed to Ohio Stateon Thursday morning, ending a recruitment that seemed destined for the Buckeyes since it began.

The younger brother of Ohio State All-America defensive end Joey Bosa selected the Buckeyes due in large part to relationships he has built in Columbus.

"It's where I felt most comfortable, and a place where the defensive line coach is going to make me the best defensive end and person I can be. Coach Larry Johnson will do that."

Bosa's marks the second class in a row that Urban Meyer has reeled in a five-star prospect from the state of Florida, followingTorrance Gibsonin the Class of 2015.

The Bosa family has strong connections to Ohio State. Bosa's mother, Cheryl Bosa, attended Ohio State, as well as his uncle Eric Kumerow, who was a standout linebacker for the Buckeyes in the mid-1980s. His father, John Bosa, was a first-round NFL draft selection by the Miami Dolphins in 1987 after playing at Boston College.

The top-ranked prospect in the state of Florida becomes the 17th commitment for the Buckeyes, who boasted the No. 3-ranked class by RecuitingNation prior to Bosa's pledge. Included in the Buckeyes' star-studded class is No. 1-ranked running backKareem Walkerand nine more ESPN 300 prospects.

With Bosa, Ohio State is poised to possibly land the top 2016 class come signing day. The Buckeyes still have a number of targets still on the board, including No. 1-overall Rashan Gary, No. 23 Antwuan Jackson, No. 121 Damar Hamlin, No. 147 Jordan Fuller and No. 155 Luke Farrell, among others.