ESPN
DURHAM, N.C. -- Luke Kennard is ready for Duke to finally resemble the team that was picked No. 1 in the preseason.

With Kennard scoring a career-best 35 points, Duke routed Maine 94-55 on Saturday in the long-awaited debut of freshmen Jayson Tatum and Marques Bolden.

"I'm just excited for everybody to get back," Kennard said. "I'm excited to be a full, healthy team, and just step on the pedal and be who we are going to be during the season."

Amile Jefferson added a career-high 20 points and Tatum finished with 10 for the Blue Devils (8-1), who shot 60 percent while playing without a true point guard.

Preseason All-America Grayson Allen and freshman Frank Jackson -- their starting backcourt for the past four games -- were held out. Allen has been dealing with a lingering toe injury, while coach Mike Krzyzewski says Jackson has "a little bit of a sore foot."

Krzyzewski says both players should be back for Tuesday night's game against No. 24 Florida in New York.

They certainly didn't need them to rout the struggling Black Bears (2-6).

Ilker Er scored all 20 of his points in the first half for Maine.

The story of this one was who finally played for Duke, as well as who didn't.

Duke has been without three injured five-star freshmen all season, with Tatum out since spraining his foot during an October practice in front of NBA scouts and Bolden sidelined since injuring his leg before the regular season started.

Tatum wound up starting and scored his first basket on a banked jumper about 7 minutes in. Bolden was the first man off Duke's bench and his first points came when he stuck back Tatum's missed layup with about 7 1/2 minutes until halftime.

Tatum played 20 minutes and left after catching a leg cramp in the second half. Bolden logged 12 minutes off the bench and Krzyzewski said he "just got tired."

"I was just happy to be out there -- to rebound, to play defense and to win," Tatum said.

Maine: As their record might indicate, the Black Bears have some things to sort out, and Cameron Indoor Stadium is a tough place to fix those problems. To their credit, they kept things interesting in the first half while Duke figured out how to play without Allen and Jackson, but they didn't have any answers for Kennard and managed just 23 points in the second half.

"Everything about them kind of wore us down," coach Bob Walsh said. "I thought they took our spirit away in the second half."

Duke: Now that two of their injured key players are back, the focus shifts to the two other players who sat this one out. Neither one took part in pregame warmups -- both stood standing next to injured big man Sean Obi on the baseline -- and they were on the bench in their warmup gear throughout.

Krzyzewski says Allen has turf toe that's "not on the main part, it's on the side part" and probably needs the extended rest that will come during exam week and over the holidays to approach 100 percent. Duke plays only two games between Dec. 11-30.

Krzyzewski said he's "just trying to deal with the bottom line that eventually, everybody gets well. ... Just kind of running motion offense here."

Duke figures to benefit from a pair of top-five upsets this week -- No. 3 North Carolina's loss at 13th-ranked Indiana, and No. 1 Kentucky's home loss to 11th-ranked UCLA -- and slide up a couple of spots when the new rankings are released Monday.

Kennard was 11 of 16 from the field, tied a season high with four 3-pointers and was 9 for 9 from the free-throw line. He scored Duke's first nine points and had 20 at halftime.

Duke: The Blue Devils take on a familiar face Tuesday night when they take on No. 24 Florida in the Jimmy V Classic in New York. The Gators are coached by Mike White -- the son of Duke athletic director Kevin White. 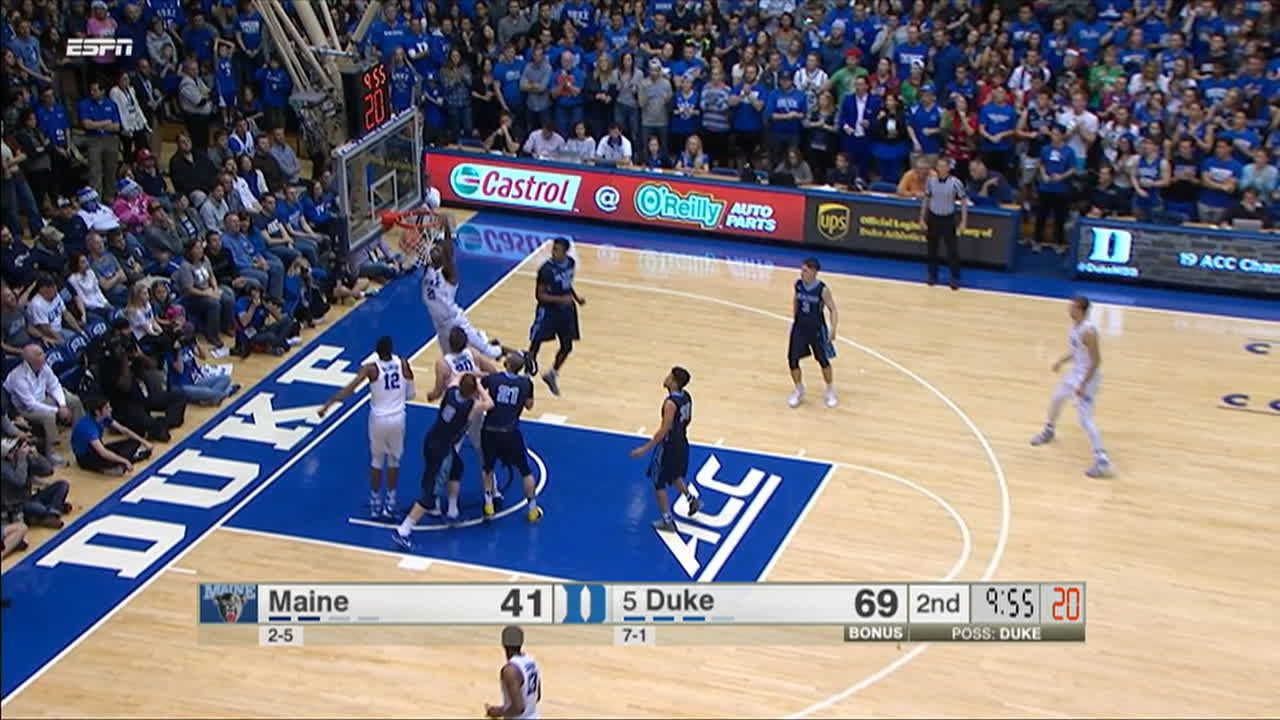