No timetable for Kyle Busch's return 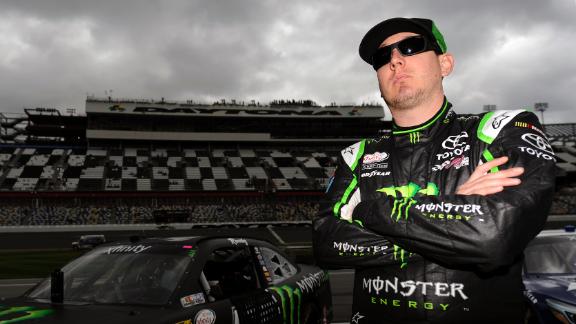 DAYTONA BEACH, Fla. -- Joe Gibbs Racing has not put a timetable on the return of driver Kyle Busch, who suffered a compound fracture of his lower right leg and a broken left foot in a crash Saturday at Daytona International Speedway.

Busch is already lobbying to come back as soon as possible, team owner Joe Gibbs said, but the number of months he misses will be determined after he returns to Charlotte, North Carolina, and visits OrthoCarolina Dr. Robert Anderson, who performed surgery on Busch's left foot in the offseason and serves as the team doctor for the Carolina Panthers.

Gibbs said Busch, who had surgery on his leg Saturday night, will return to North Carolina as soon as he feels well enough to fly home.

"Today has been our whole focus, so we'll talk more about how long he's going to be out and try to get an evaluation of that, and then starting tomorrow we'll talk about what's our best decision for everybody on going forward," Gibbs said Sunday before the Daytona 500. "I know our emphasis is getting him back as quick as we can.

"I know that's what Kyle will be wanting to do, and we'll have everybody working with him and for him in rehab and everything else to get him back as quick as we can in the car."

Replacing Busch for the Daytona 500 is Matt Crafton, who has won back-to-back Camping World Truck Series titles but has never competed in a Cup race. Crafton attempted to qualify at Indianapolis for RAB Racing but failed to make the field.

While NASCAR typically would not allow a rookie to start a car qualified by someone else, the 38-year-old Crafton is in his 15th year racing trucks. He also has driven cars for JGR and Richard Childress Racing in substitute roles during practice and qualifying in recent years.

Driving for Toyota-supported ThorSport Racing in the trucks, Crafton and Busch have a strong relationship. Whether that will put Crafton in the car beyond Daytona remains to be seen, with both Gibbs and Crafton saying Sunday that they have not talked much about next week's race at Atlanta and beyond. JGR has a development driver, Erik Jones, who is running a handful of Xfinity Series races for the team in addition to a full truck schedule for Kyle Busch Motorsports.

"There's nothing like getting a phone call at 7 o'clock at night and say, 'You're going to go race the Daytona 500 tomorrow. Are you ready?'" Crafton said. "Absolutely ready. I've been waiting for this my whole life."

NASCAR executive vice president Steve O'Donnell would not say Sunday morning how many races Busch could miss and whether he would have to be in the top 30 to still be eligible for the Chase for the Sprint Cup with a win in the 26-race regular season. Brian Vickers, who is missing the first two races of the season because of heart surgery in December, was granted an exemption to miss the races but still must be in the top 30 to be eligible for the Chase with a win.

Asked in January if Vickers would have missed five or six races if he still would have been Chase eligible, O'Donnell wouldn't speculate but said they were comfortable with the races Vickers planned to miss and that the number of races missed "definitely does" matter when making the decision.

"Two, certainly even three, we looked at, and this makes sense from a sport perspective. ... We've only got 36 races, so at some point we've got to look at that and make a call on balance, but we thought where we were was more than fair with Brian," O'Donnell said.

Busch has 29 career Cup wins in 365 starts. He also has 70 Xfinity and 42 truck wins, racing over the criticism that he is piling up wins in developmental series. He had planned to run only four truck races in 2015 but still had the majority of Xfinity races on his schedule. Gibbs said he won't keep Busch from running those races when he feels ready to do two races in a weekend.

"He just loves it so much and felt like it was something that really makes him happy, keeps him excited about life, and you always wrestle with that [potential for injury]," Gibbs said.

Safety Concerns In NASCAR
Ricky Craven discusses the concerns of NASCAR drivers and the necessity to have SAFER barriers and possibly eliminate the grass on the infield.

Kyle Busch Will Not Race In Daytona 500
Marty Smith reports the latest on Kyle Busch, who will miss the Daytona 500 after injuring his right leg in a crash during the NASCAR Xfinity Series at Daytona.

Drivers Upset At Lack Of SAFER Barriers
Marty Smith discusses the response from drivers concerning Kyle Busch's injury after hitting a concrete wall at Daytona International Speedway and what needs to be done to make the sport safer.