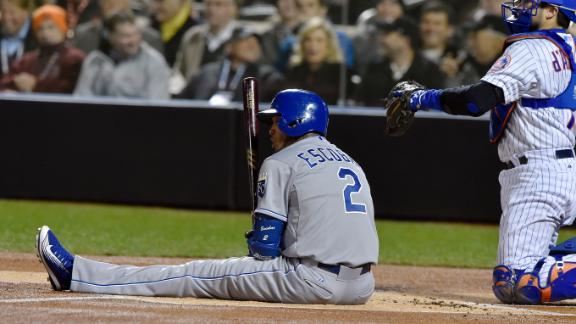 NEW YORK -- Mets starter Noah Syndergaard sent a message to the Kansas City Royals with the first pitch of Game 3 of the World Series on Friday night. Just in case it failed to resonate, he followed up with an even more combative statement after the game.

Syndergaard sent Alcides Escobar sprawling with a high, 98 mph fastball in the vicinity of the Kansas City shortstop's head to lead off the first inning. When questioned about it during a postgame news conference, Syndergaard admitted it was no accident.

And if the Royals have an issue with his approach, Syndergaard said, they know where to find him.

"My intent on that pitch was to make them uncomfortable, and I feel like I did just that," Syndergaard said. "I think in every postseason game that Escobar has played in, he's swung at the first-pitch fastball. I didn't think he would want to swing at that one.

"I mean, I certainly wasn't trying to hit the guy, that's for sure. I just didn't want him getting too comfortable. If they have a problem with me throwing inside, then they can meet me 60 feet, 6 inches away. I've got no problem with that."

"I didn't like it," Escobar told reporters after the game. "He said yesterday that he had a plan against my aggressiveness. If that was the plan, it's a stupid plan. No pitcher should throw a 98 mph pitch at the head of a batter in the first at-bat. If he wants to, he can throw it at my feet. He can throw it at any part of my body -- but not at my head. That's just wrong."

Escobar has had a major impact this postseason with an aggressive approach against first-pitch fastballs, and Syndergaard had dropped hints before Game 3 that he might do something to try to neutralize it.

"I have a few tricks up my sleeve," he had cryptically said during a Thursday interview session.

Upon arrival at the park Friday, Syndergaard conferred with Mets catcher Travis d'Arnaud and mapped out the game-opening sequence.

"My first words to Travis when we walked in the clubhouse today were, 'How do you feel about high and tight for the first pitch and then a curveball for the second one?'" Syndergaard said. "So I feel like it really made a statement to start the game off -- that you guys can't dig in and get too aggressive because I'll come in there."

"I think the whole team was pretty upset. The first pitch of the game goes whizzing by our leadoff man's head," Moustakas said. "I think all 25 guys in that dugout were pretty fired up."

First baseman Eric Hosmer said the Royals knew immediately from the dugout that the pitch was intentional. He declined to speculate on how and where any lingering animosity from the incident might resurface.

"When one of your teammates gets [a pitch] thrown at his head, it's not going to go over well," Hosmer said. "I think everyone was upset about it. It's the only location he missed all night by that far. No one in here is stupid. Everyone knows what was said, and everybody knows what was done.

"You file it away. We're trying to win a world championship. That's the ultimate goal. I think the game just has a way of making all that stuff take care of itself."

Syndergaard knocks Escobar off his feet to start the game
Mets pitcher Noah Syndergaard started the first inning with a pitch that nearly hit Royals SS Alcides Escobar in the head which forced him to the ground.