Nolan Arenado to miss some time 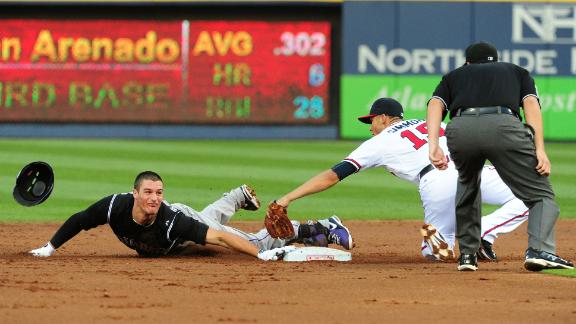 ATLANTA -- Rockies third baseman Nolan Arenado left Friday night's game against the Braves after fracturing his left middle finger on a head-first slide into second base.

Arenado led off the second inning with a double to left field. His slide beat shortstop Andrelton Simmons' tag, a play that stood following a review that lasted 3 minutes, 48 seconds.

Arenado grabbed his hand following the slide but remained in the game to score from third on Jordan Pacheco's groundout. Charlie Culberson replaced Arenado at third base in the bottom of the inning.

Rockies manager Walt Weiss said he doesn't know if Arenado will need surgery on the finger, but it's likely that he will require a trip to the disabled list. Shortly after the injury, infielder Josh Rutledge was recalled from Triple-A Colorado Springs.

"He'll miss some time," Weiss said. "It's tough news for our club. He's off to a great start and a hell of a player."

Arenado, who is hitting .305 with six home runs and 28 RBIs, is the latest in a long line of major leaguers to suffer a finger injury as the result of a head-first slide into a base. Already this season, the Tampa Bay Rays' Ben Zobrist, Washington Nationals' Bryce Harper and Los Angeles Angels' Josh Hamilton have sustained finger injuries from head-first slides into a base.

The loss of Arenado would be a blow to a Rockies lineup that was missing outfielder Carlos Gonzalez for the second straight game with a swollen left index finger.

Arenado Breaks Finger
Nolan Arenado will be out of the Rockies lineup for some time after breaking his finger on a head-first slide into second base against the Braves.