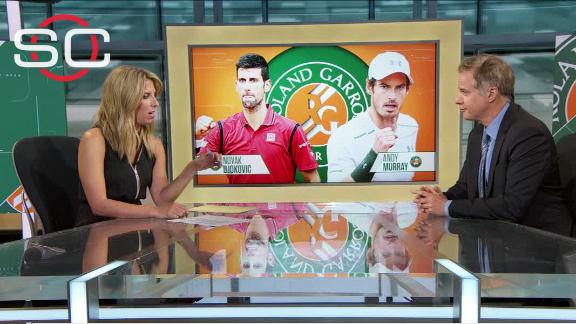 PARIS -- A French Open champion at long last, and the first man in nearly a half-century to win four consecutive major championships, Novak Djokovic grabbed a racket and etched a heart in the very red clay that had given him such heartache in the past.

Then, when he finally was handed the La Coupe des Mousquetaires -- the one trophy he truly yearned for, the one he needed in order to complete his career Grand Slam -- Djokovic held it overhead, his eyes shut, before kissing it, exhaling and smiling broadly.

In his 12th appearance at Roland Garros, and fourth final, the top-seeded Djokovic earned that elusive title, casting aside a shaky opening set to dominate the rest of the way in a 3-6, 6-1, 6-2, 6-4 victory over No. 2 Andy Murray on Sunday, buoyed by a supportive crowd that repeatedly chanted his nickname, "No-le!"

"It's really a very special moment," Djokovic said, "perhaps the greatest moment of my career."

Since losing the 2015 final in Paris, Djokovic has won 28 Grand Slam matches in a row, from Wimbledon and the US Open last year, to the Australian Open in January, and now, at long last, the French.

The last man to hold all four major titles simultaneously was Rod Laver in 1969, when he earned a calendar-year Grand Slam. Djokovic now can set his sights on that ultimate tennis achievement, because he is halfway there.

"This is something that is so rare in tennis," said Murray, who is now 2-8 in Grand Slam finals. "It's going to take a long time for it to happen again."

The 29-year-old Djokovic also owns six Grand Slam titles from the Australian Open, three from Wimbledon and two from the US Open, giving him a total of 12. Among men, only Roger Federer (17), Rafael Nadal (14) and Pete Sampras (14) own more.

Of Djokovic's 11 career losses at Roland Garros, six came against nine-time champion Nadal, one against Federer. Three came in finals, against Nadal in 2012 and 2014, against Stan Wawrinka a year ago. Djokovic's 2016 path was unencumbered by any member of that trio: Federer withdrew before the tournament and Nadal before the third round, both citing injury; Wawrinka was eliminated in the semifinals by Murray.

Still, Djokovic's most imposing adversary might very well have been his own demons -- the knowledge that the tournament that meant more to him than any other was the only tournament he simply couldn't seem to conquer.

On Sunday -- the weather overcast but dry, unlike so much of the rainy past two weeks -- the first choruses of "No-le! No-le!" accompanied Djokovic's entrance to the court. They returned when an announcer introduced Djokovic during the warm-up period. And again when he skipped from sideline to baseline to receive in the opening game -- and, louder still, when Djokovic broke Murray to start.

All in all, it sounded as if this were Belgrade, rather than a neutral site, and Murray complained that fans were calling out between his first and second serves.

The spectators really raised a ruckus when a Murray serve was called a fault by a linesman, immediately overruled by chair umpire Damien Dumusois. Because Djokovic's return was out, Dumusois declared Murray led 30-love. Djokovic, already convinced there should have been a double-fault there, maintained the point should be replayed.

Dumusois wasn't buying it. The crowd booed and whistled loudly, delaying play for a full minute, an odd interlude in a Grand Slam final.

Soon, Murray closed the first set. As Djokovic bowed his head, Murray ran backward to the changeover chair, pointing at his right temple.

Aside from the first game, Murray was perfect in that set, trying to become Britain's first male champion in Paris since 1935. Djokovic was off -- jitters, perhaps? -- and particularly so with his forehand, which offered up seven unforced errors before Murray made one.

Now Djokovic was the domineering one, yanking an increasingly exhausted Murray this way and that with just the right shot at just the right moment and creating a 24-6 edge in winners across the second and third sets.

When Djokovic slid to reach a drop shot by Murray and somehow crafted a cross-court backhand winner at an impossible angle to go a double-break up in the third at 4-1, the Serb raised his right index finger -- "I'm No. 1!" -- then sat and raised a clenched fist.

Djokovic broke again to begin the fourth set, and his long, arduous journey to history was soon complete. 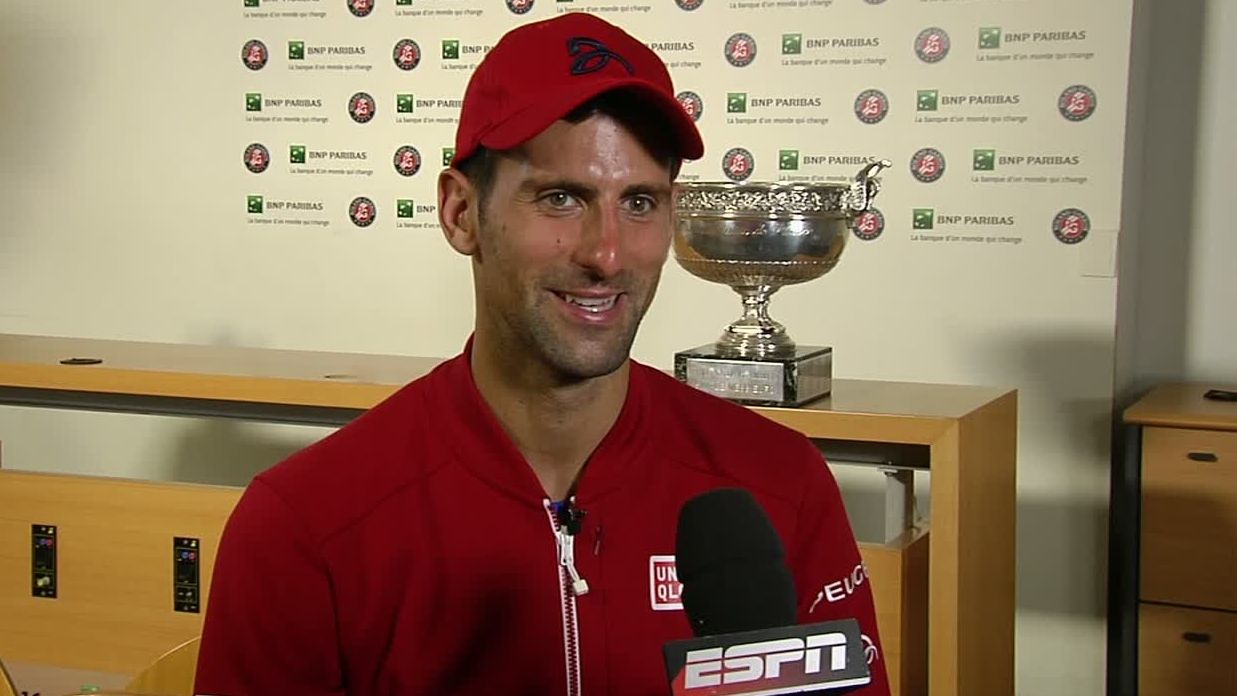 Djokovic: I've waited a long time for this win
Novak Djokovic is proud of his French Open win and thrilled to have achieved a career Grand Slam, but this accomplishment has humbled him, and he says he is truly "honored" to be listed among the tennis greats.
Related topics:
sportsespndjokernews uk tennisandy murrayroland garrosgrand slamnovak djokovicfrench opentennis
Copyright © 2021 ESPN Internet Ventures. All rights reserved.
More Videos
From CNN Newsource affiliates
TOP STORIES