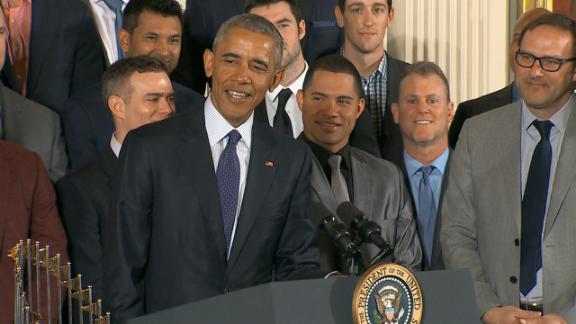 WASHINGTON -- It wasn't lost on President Barack Obama or the Chicago Cubs that Monday's White House celebration of the team's World Series victory would be the last official event of his presidency. It also wasn't lost on team president Theo Epstein that the Cubs were being honored by a notoriously loyal Chicago White Sox fan.

"We have taken the liberty of offering you a midnight pardon," Epstein joked to Obama during the afternoon ceremony. "We welcome you with open arms today to the Cubs family."

Both Obama and Epstein spoke to a packed East Room of the White House filled with current and former players along with White House staff, many of whom are Cubs fans.

"They said this day would never come," Obama began his remarks. "I will say to the Cubs, it took you long enough. I only have four days left. You're just making it under the wire.

"Even I was not crazy enough to suggest that during these eight years we would see the Cubs win the Worlds Series. But I did say there has never been anything false about hope."

Annual hope for the Cubs from their large fan base was finally rewarded in 2016 with a title, the first in 108 years for the organization. It's the second team Epstein has guided to a World Series win after a long drought, having taken the Boston Red Sox all the way in 2004 after 86 years without a title. It prompted a job offer from Obama -- and a few laughs from the crowd.

"His job is to quench droughts," Obama said of Epstein. "He takes the reins of an organization that's wandering in the wilderness. He delivers them to the promised land. I've talked to him about being DNC chair, but he's decided wisely to stick to baseball."

After the ceremony, first baseman Anthony Rizzo called the day the "icing on the cake" of their championship season. Current players were reunited with popular outfielder Dexter Fowler and catcher David Ross, along with Chris Coghlan and Trevor Cahill. None will be with the Cubs next season.

"What an amazing experience we had today," Rizzo said. "Something we'll never forget. ... Michelle [Obama] showing up was pretty cool."

President Obama claimed that among the 50 or so teams the White House has welcomed over his eight years as president, the first lady has never made an appearance until Monday. Before the official ceremony, the lifelong Cubs fan met with the team. Rizzo recalled the moment when she and her husband walked into the room.

"It's a room that's all chatter, chatter, chatter, and then the president and first lady walk in and it's complete silence," he said. "You could hear a pin drop. You get chills running through your body."

Later, in its attempt to convert the president to a Cubs fan, Rizzo and the team presented him with a No. 44 Cubs jersey, a lifelong pass to Wrigley Field for him and his family, a "W" flag and the "44" panel from the center-field scoreboard.

As impressed as the president was with his gifts -- and despite an urging from Hall of Fame pitcher Fergie Jenkins -- Obama wouldn't go so far as to put on the Cubs jersey. As for Cubs manager Joe Maddon, Obama called him "cool" for wearing a turtleneck and suede coat to the White House. Obama also remarked that he and Ross had something in common: The two of them have been on a "yearlong retirement tour."

After acknowledgements of the team's success as well as a few more jokes, Obama took note of celebrating the Cubs' championship on Martin Luther King Day.

"There is a direct line between Jackie Robinson and me standing here," he said. "It's worth remembering that throughout our history sports has had this power to bring us together even when the country is divided. Sports has changed attitudes and culture in ways that seem subtle but ultimately made us think differently about ourselves and who we are. ... Sports has a way of changing hearts in a way politics or business doesn't."

After a tour of the White House, a talk with both the president and first lady and then the official ceremony, Maddon summed up the Cubs' day.

"It's pretty magnificent to be invited to the White House," he said. "It's a powerful moment. It's a humbling moment." 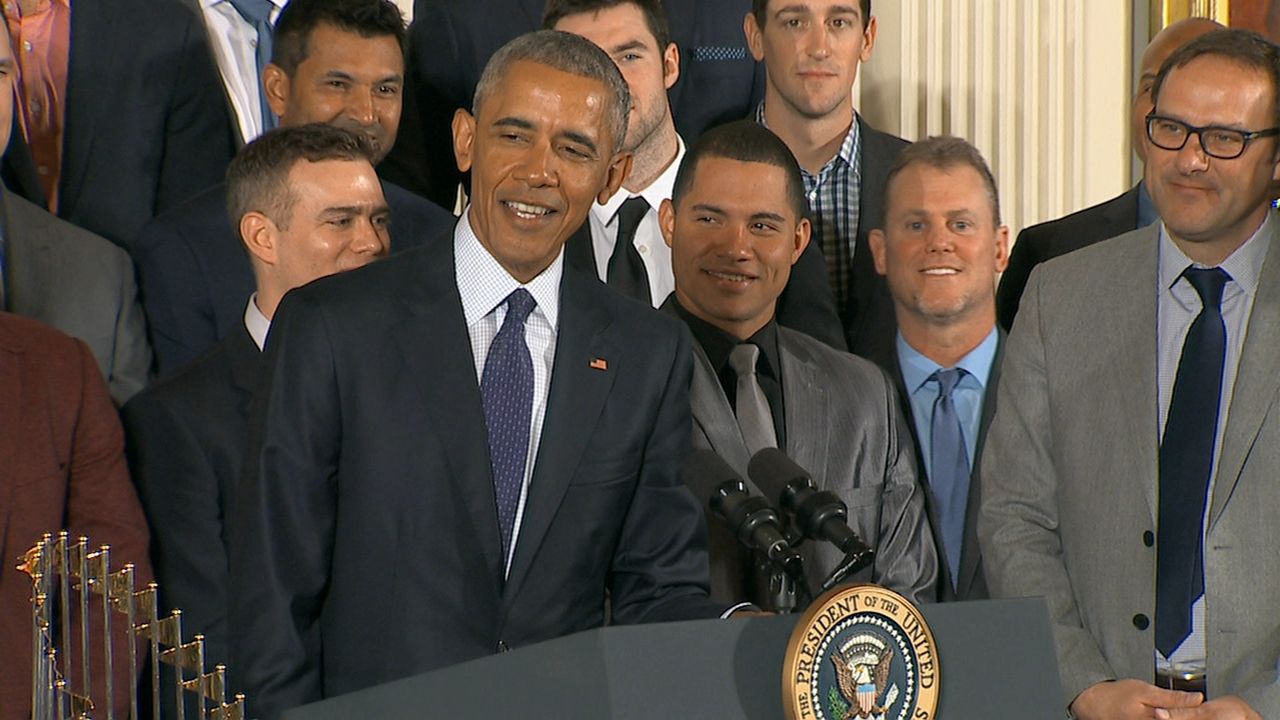